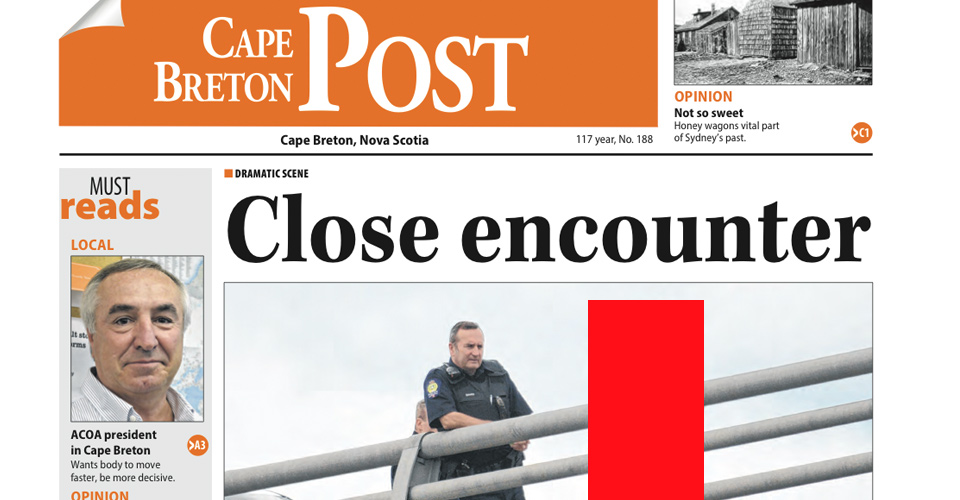 Nova Scotia Paper Shows How Not To Report On Suicide

"What the Cape Breton Post did was a danger to the public," expert says
Article By Kate Robertson
Share

It takes a moment to comprehend what you’re looking at in the photo: a police officer stands on a highway overpass, leaning on the guardrail. He’s looking calmly at a young man standing to his right with his back turned, elbows resting loosely on the railing.

But he’s on the wrong side of the guardrail — he’s on the outside. His head is in his hands. The heels of his sneakers hang ominously over the edge.

“Close encounter,” was the headline that accompanied the image, zoomed in, above the fold on the front page of the Cape Breton Post on August 26. “Man threatens to jump from Sydney overpass,” read the subheadline below. The story appeared online too, although the headline and photo are slightly different (“Man threatening to jump from Whitney Pier overpass now safe”), and it isn’t zoomed in — you can do that yourself in your browser if you really want to. Because it’s still online, despite the flurry of social media responses and letters to the editor, including the one I wrote the day it was sent to me.

Post managing editor Carl Fleming stands by the decision to run the image and story as they did. He refers critics to the accompanying editor’s note — which is lengthier than the story itself — for an explanation. “I think we’ll let the editor’s note speak for itself,” he tells me when reached by phone.

“Media companies have traditionally kept quiet about suicide attempts and the aftermath left by those who succeed,” it reads. “We strongly question this rationale — not for sensational reasons, but rather for the need for better clarity and conversations about difficult realities.”

But what clarity was gleaned from this exercise? It’s not evident that the photo was even taken by a reporter. The story is credited to “Staff,” the photo to the “Cape Breton Post,” and the editor’s note concedes that they didn’t actually collect any details about this particular person’s situation.

“To be clear, we do not have background or context behind this photo — what the man’s motivation was in standing in public view teetering on an overpass for so long,” says the note. “While police will not say, on appearance alone it looks to be an heroic and compassionate outreach by officers, as well as a young man who was convinced to reconsider whatever course of action he was contemplating. Perhaps it was something other than what appeared to the many witnesses who watched it unfold from below. At the point of writing this, no one will explain clearly what the image depicts.”

It doesn’t mention that suicide attempts are preventable. It doesn’t say that suicide is almost always connected to a mental illness. Nor does it offer advice to future onlookers who may witness something like this one day (like, say, warning against taking a photo of a person in distress), beyond including two phone numbers to crisis hotlines. It doesn’t even mention the suicide “cluster” — when multiple suicides occur around the same time in a geographic area — that many on the Nova Scotia island have been grappling with in recent months.

What is clear is the potential damage of telling a story about an individual in this way, on the front page of the paper that serves a small community. There are fewer than 100,000 people living on the island and approximately 30,000 in Sydney, its largest population centre.

“What the Cape Breton Post did was a danger to the public, by putting this picture on their front page,” says Mark Henick, a mental health advocate and Sydney native. He would know: not only is he the national director of strategic initiatives at the Canadian Mental Health Association (CMHA), but as a teenager in Cape Breton, he made two suicide attempts — one of them on Whitney Pier, the same bridge in the photo. He told his story in detail in a TEDxToronto talk he gave in 2013.

“I did that,” he tells me on the phone. “I stood on the wrong side of the railing of that overpass. Nobody took a picture of me. I did it at 2 in the morning, but everybody still found out. It’s a small town. If my picture had been on the front page of the newspaper, zoomed in like that, everybody would know who I was, anyway. There’s a very real danger there that he could have seen that and that it could have put him at a higher risk, given that he’s already in such a vulnerable place. And now he has to have that photographic evidence of that moment in his life for the rest of his life.”

There’s also a danger of triggering suicidality or mental health issues in readers. Henick says research shows that merely talking about suicide won’t cause others to kill themselves — mental illness is really at the core. But presenting people with a shocking image and very little context or support? That can cause issues.

“When it’s reported in irresponsible ways, such as showing graphic imagery or showing people who weren’t prepared to be triggered this kind of image, it can bring up something that they may not have yet resolved or be prepared to face, and may not have the skills to deal with,” he says.

The Canadian Mental Health Association’s website includes guidelines on how to report on suicide. The editors of the SaltWire-owned Cape Breton Post either ignored or weren’t aware of a lot of them.

Suicide is a medical emergency and should be treated as such. Someone in the midst of an attempt requires swift medical attention and a treatment plan. But there is also an ongoing, well-known lack of mental health services in Canada, particularly in rural, lower-income areas like Cape Breton. That’s perhaps where advocacy groups and the media could make an impact and prevent mental health crises. (This week, the Post published a piece about the World Suicide Prevention Day event in Sydney.)

“There’s a certain defeatism that the system is broken and therefore can’t help people,” Henick says. “That’s true. The system is broken. But by asking more frequently and more loudly for services, by putting pressure on the system, it creates more of a demand to increase services. The way I became a mental health advocate ironically involved writing a letter to the Cape Breton Post about why we should talk about mental health in high schools at the time. So I think people need to speak up and ask how we start to change the system.”