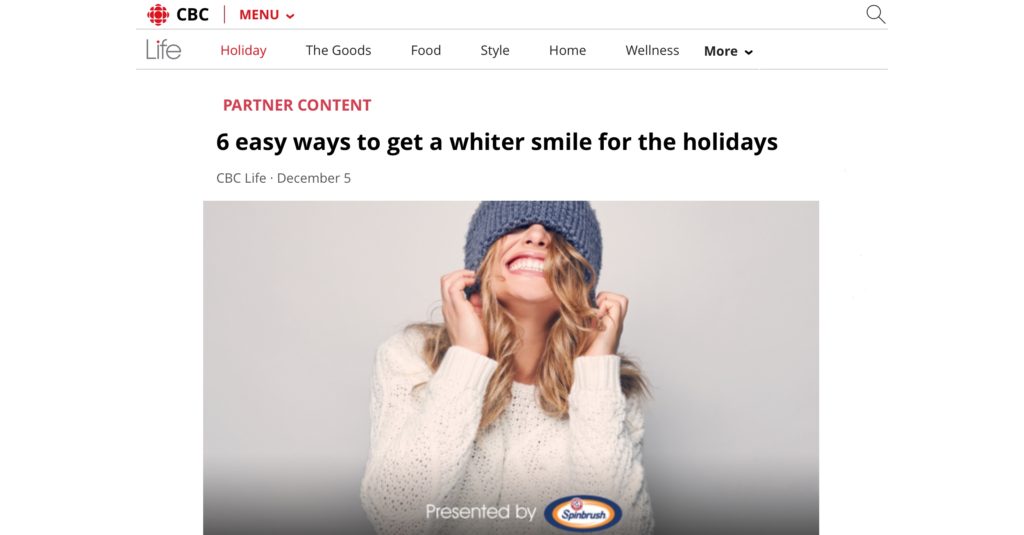 The difference between sponsored and non-sponsored content grows ever thinner at CBC.

If you’re looking for “10 fun and affordable stocking stuffers for kids”, Spinbrush has sponsored a CBC Life post written by Jane Collins to help you out. The same writer also has ideas for “All the best pizza-themed holiday gifts” this year, but that post is unsponsored.

The stocking stuffer story comes with the following disclaimer:

CBC journalists have not participated in the drafting of this content. The partner takes full responsibility in the creation of this information.

This is paid content provided by or produced on behalf of Spinbrush.

The two stories are written in the same style, offering gift tips with links on where to buy various products.

CBC spokesman Chuck Thompson confirmed the same person wrote both posts. “Yes, Jane Collins wrote these entertainment/lifestyle pieces and she is not a journalist,” he said.

All of the pieces that you have referenced fall under the lifestyle section of CBC.ca (cbc.ca/life not cbc.ca/news) and where there is sponsored content, we make that very clear at the top of each page. And then more importantly, just to be perfectly clear, people who write for CBC Life are not journalists.

Advertorials are a form of advertising made to look like regular news stories, but are usually otherwise marked. In the case of the stocking stuffer ad, and another on how to keep your teeth white, the stories are marked “partner content” and the accompanying photo is marked “Sponsored by Spinbrush.”

The news division is concerned the content may be accidentally posted or linked to from actual news stories in the CBC’s publishing platform, called Polopoly. In a memo to sent to news staff this week obtained by CANADALAND, the senior director of digital news Brodie Fenlon reminded editors to be wary of what they’re linking to, as sponsored posts aren’t flagged and Life and News stories mingle alongside one another.

“When you search for content in Polopoly, please be aware of this. There is more and more non-news content mixed in with our stuff — ie ‘stories,’ photos and video,” Fenlon wrote. “Until a solution is implemented, please check everything. I know we’re doing this already but there is more at stake than just linking to an outdated news story. We cannot accidentally link to an advertisement framed as news.”

Advertorial goes by many names, depending on the publisher, including “sponsored content,” and “native advertising.” Digital publications BuzzFeed and VICE are two of the leading producers of these ads, and many news organizations rely on them as ad dollars dry up everywhere else.

CBC commentators have previously written how publishers should be wary of these ads because they erode the firewall between journalism and advertising.

Neil Macdonald, wrote this in a column:

Look and you find them quickly enough. They are the “around the web” section on news websites, or the “partner content” section, or the “sponsored stories.”

At first glance, they blur, even shatter the line between journalism’s church and state.

Which is to say, they are not clearly and unequivocally ads in the old sense. They actually appear to be journalism. Some are more clearly marked than others, and some are barely marked at all.

I remarked to [journalist Andrew] Sullivan that no matter how an ad is dressed up, I know pretty quickly what I’m looking at. Don’t we have to trust the reader to be just as intelligent?

His reply: “When the reader is supposed to be intelligent enough to see through your deception of the reader, you have the wrong idea of what reader intelligence is about.”

There was a time when I would have immediately agreed, with dogmatic certainty. But that was back when we had the luxury of debating such things and still taking home a nice paycheque.

Nowadays, I’m afraid, I’m all for ads the reader will actually read. As a crass, self-interested matter of survival.

Michael Enright, the host of the Sunday Edition, said this in one of his essays:

Now, I realize that journalism has changed mightily over the last five decades. But some verities in our business are indeed eternal.

One is the absolute church and state separation of advertising and editorial.

One of my heroes in this game is the legendary U.S. magazine editor John Mack Carter. It was he who once said: “The advertising manager is always welcome in my office; as long as he comes in on his hands and knees.”

During the last Olympics, many advertisers passed over running tradition 30-second spots, and instead focused on sponsoring individual segments. SportChek sponsored a series of highlight segments of the best moments of the day, according to a Globe and Mail report. Tim Hortons and Samsung also put stamped their names on reported segments throughout the Games.

It’s not all for-profit businesses vying for advertorial partnerships. Murdoch Mysteries, Canada’s most whimsical Victorian-era police procedural set in Toronto, teamed up with SickKids for a two-hour holiday episode on the history of the children’s hospital.

At the same time the CBC is increasing its advertorial content online and elsewhere, the public broadcaster has recently made a proposal to the federal government that they could go completely ad free, if their funding is increased by $400 million.