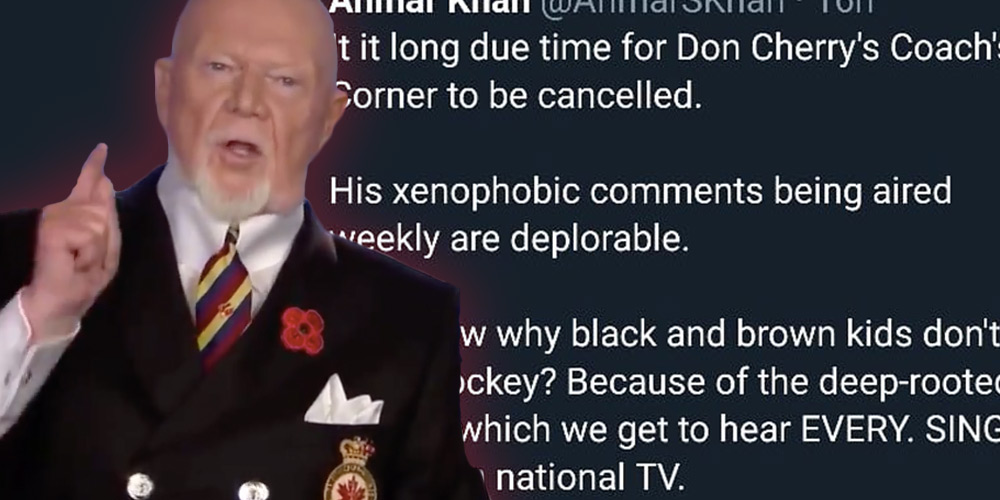 In the immediate aftermath of Don Cherry delivering his “you people…that come here” rant Saturday evening, many CBC employees were publicly circumspect.

After all, the public broadcaster had been chiefly responsible for cultivating the hockey commentator’s career, and continued to serve as the platform on which he could spout off on any subject, despite no longer controlling the program on which he appeared. Officially, he was Rogers’ problem, but CBC was still the home of Hockey Night in Canada.

And so initial reaction from network personalities tended to look something like this:

A notable exception, however, was a missive from Ahmar Khan, a reporter at CBC Manitoba who was blunt about Cherry and the implications of his remarks: “It [is] long due time for Don Cherry’s Coach’s Corner to be cancelled,” Khan tweeted late Saturday night. “His xenophobic comments being aired weekly are deplorable. You know why black and brown kids don’t enjoy hockey? Because of the deep-rooted racism, which we get to hear EVERY. SINGLE. WEEK. on national TV.” The tweet included a clip of Cherry’s comments, as shared by another user who’d observed that Cherry was “being a POS.”

The tweet went viral, racking up over a thousand retweets and 4,500 likes. But by Sunday afternoon, it had disappeared.

The CBC confirms it had Khan remove it.

“We asked Ahmar Khan to take down a tweet about Don Cherry (and he agreed to) because it did not meet our Journalistic Standards and Practices with respect to social media guidelines,” spokesperson Chuck Thompson tells Canadaland in an email.

Asked which part(s) of the tweet fell short of their standards and just which of the guidelines it ran afoul of, Thompson points to a clause concerning “the expression of personal opinions on controversial subjects, including politics.” This, according to the guideline, “can undermine the credibility of CBC journalism and erode the trust of our audience. Therefore, we refrain from expressing such opinions in profiles or posts for any account which identifies or associates us with CBC/Radio-Canada.”

On Monday morning, his tweet was quoted by Joe Warmington in a Toronto Sun column, which identified him as a CBC reporter. Khan shared some of the hate mail that followed:

Here's one of the many comments I received after Joe Warmington decided to put my name in his article.

The shittiest part of all of this, is that my mum has seen these comments.

I have to now front that these don't affect me, that they don't cut deep, that people don't want her in this country and think less of her child.

Nothing sucks more then hearing the worry in her voice. https://t.co/qe1i6cqara

Rogers’ Sportsnet fired Cherry on Monday afternoon, after which the pugilistic octogenarian proceeded to do the media rounds — including appearances on The Rebel and Tucker Carlson Tonight — to describe how he had been silenced.

Meanwhile, following the barrage of hate, Khan chose to take a break from Twitter.

Logging off for the next few days. If you need to reach me, do so by email.

Be kind to each other, and always be wise to what you say. Thank you all for the kind remarks and words.

Clarification (November 14, 2019, at 3:02 p.m. EST): A passage stating that “Rogers fired Cherry” has been amended to make clear the action was taken by Rogers Media’s Sportsnet, which maintains editorial control over its broadcasts.