The President of the Canadian Media Guild has confirmed to CANADALAND that a threatening message was posted in a CBC TV newsroom. The message, spelled out with children's fridge letter magnets, read: "jesse BROwn snitches get STITCHES".
News Brief By Jesse Brown
Share

The President of the Canadian Media Guild has confirmed to CANADALAND that a threatening message was posted in a CBC TV newsroom.

The message, spelled out with children’s fridge letter magnets, read: 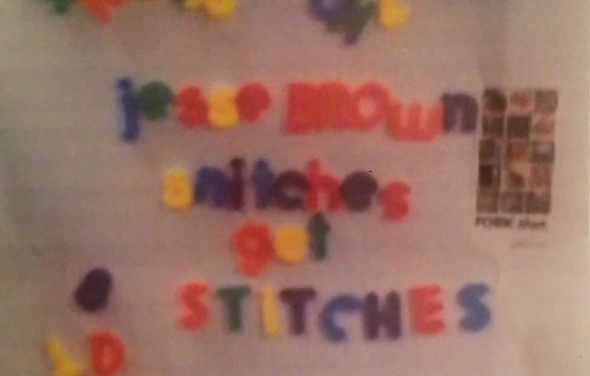 The message was waiting for staff the morning of Wednesday, January 14, in CBC’s Toronto headquarters, in a 4th floor staff kitchenette located between the newsrooms of TV news and TV business, where The Exchange with CBC Senior Business correspondent Amanda Lang is produced.

One day earlier, CANADALAND published an on-the-record interview with CBC journalist Kathy Tomlinson, in which she stated that Amanda Lang had a “percieved conflict of interest” with RBC that she should have disclosed to her colleagues.

According to two separate accounts, several staffers took pictures of the fridge magnet message, but Andrew Ferguson, Executive Producer of News Now soon approached and ordered all employees to destroy the pictures from their phones, “before Jesse Brown finds out about this”.

Nevertheless, word of the threatening message soon reached CANADALAND, followed by a picture of it. Extraordinary precautions were taken by a CBC employee who wanted the threat reported: the image was re-photographed from a computer screen, printed, and then hand-delivered to CANADALAND by an intermediary.

Andrew Ferguson did not respond to a request for comment.

Whether or not the fridge message was intended as a joke or a threat (or both) is unclear. Either way, several CBC newsroom employees took it seriously. CANADALAND is told that workplace tensions are high in several CBC bureaus across the country, as a growing number of journalists are displeased with management’s handling of both the Ghomeshi and Lang scandals, while others are displeased that their colleagues have been sharing information with the press.

“As soon as we became aware of it,” says CMG President Carmel Smyth, “we brought it to management’s attention and asked them to look into it”.

CBC management has not responded to a request for comment.

Early reports that Cheese Wagstaff was later spotted at the Ooh La La coffee shop in the CBC atrium dropping dimes to Bunk Moreland like a snitch canary remain unconfirmed.

Information on this story can be sent to jesse@jessebrown.ca