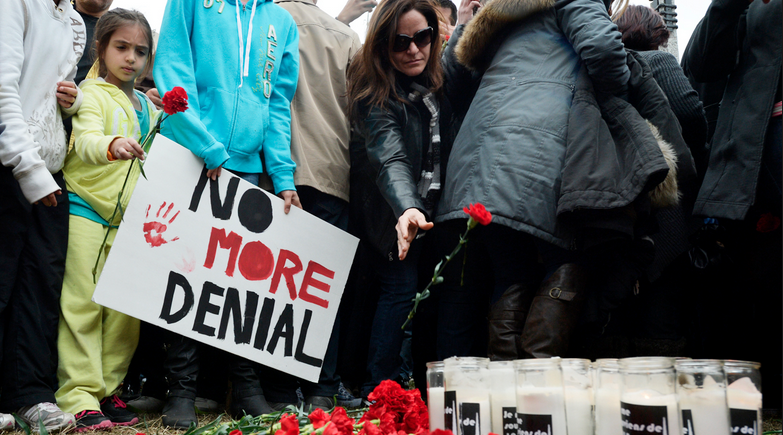 Today marks the 100th anniversary of the Armenian genocide.

Or, as CBC News must phrase it, it’s the 100th anniversary of “what is widely referred to as the Armenian genocide. The Republic of Turkey disputes the term.”

Here’s a memo that went out to CBC newsrooms this morning from the CBC Alert Desk:

***IMPORTANT:  Those doing coverage of today’s Armenian commemorations should read the below note on CBC policy regarding the use of the term “genocide.” We CAN use it, but it should be qualified.

The word genocide, coined in the 20th century, refers to the intentional and widespread extermination of a particular group. The term “ethnic cleansing” is sometimes used, since the victims are often targeted because of their racial or national background.

The 1948 United Nations Convention on Genocide broadens the meaning to include acts intended “to destroy, in whole or in part, a national, ethnic, racial or religious group.”

In news stories, use the word genocide with care. If facts are in dispute, mention this and attribute claims, conclusions, etc., accordingly.

By contrast, Turkey has refused to classify the mass killings of Armenians by Ottoman Turks during the First World War as genocide. Turkish authorities consider the deaths a legitimate military response to revolution and banditry. Canada and more than 20 other countries have formally recognized the killings as genocide, including Belgium, France, Italy and Russia. So has a United Nations commission and the European Parliament. Critics, however, have questioned whether the killings between 1915 and 1916 were actually part of an orchestrated, systematic attempt at extermination – a key component in their definition of genocide. Many Armenians were killed. Others died of starvation or disease.

For this reason, the common term Armenian genocide should be qualified when used in our reporting. Examples:

***  In what’s widely referred to as the Armenian genocide …

***  … The UN, Canada and more than 20 other countries recognize the slaughter as genocide. But Turkey disputes the term …

Millions of people around the world mark April 24 as the Armenian Genocide Remembrance Day. More than 20 countries, including Canada, recognize the slaughter of Armenians during the First World War as genocide. But Turkey rejects the term.

There’s no need to use a word such as “alleged” to describe mass killings that are known to have taken place. But when facts are in dispute our audience should be informed. (Armenians say 1.5 million died, for instance, while the Republic of Turkey puts the number at 300,000.) While some governments and many scholars label the killings genocide, it’s important to acknowledge that Turkey and others do not. By mentioning both official positions, CBC News maintains balanced coverage.

UPDATE:
CANADALAND has also obtained the Montreal Gazette’s policy for referring to the Armenian genocide, which is consistent with the policies of the Boston Globe and the New York Times. This is taken from the text of the statement, which is signed by The Gazette’s Editor-in-Chief:

“It seems clear from the historical record that what took place in Turkey around 1915 amounted to a genocide, as defined in the 1948 UN convention on genocide: killing or harming people ‘with intent to destroy, in whole or in part, a national, ethnic, racial or religious group.’ As a result, reporters and editors are free to use the word genocide, without quotation marks, in relation to the Armenian tragedy and should avoid using qualifiers such as ‘alleged,’ ‘disputed’ or’ what Armenians call.’
We may report Turkish denials of such a claim when they are relevant, but we should not feel obliged to include such
denials with every reference to the Armenian genocide.”