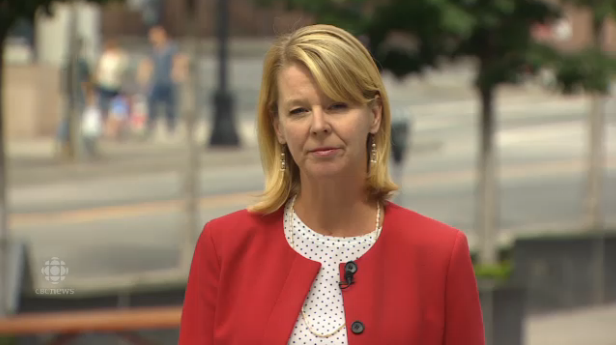 CBC journalist Kathy Tomlinson is a key figure in our reporting into Amanda Lang's conflicts of interest. Until this point, she has not provided CANADALAND with comment. Now she has agreed to share her side of the story.
News Brief By Sean Craig
Share

CBC journalist Kathy Tomlinson is a key figure in our reporting into Amanda Lang’s conflicts of interest. Until this point, she has not provided CANADALAND with comment.

Now she has agreed to share her side of the story.

Tomlinson is the investigative reporter who exposed the fact that RBC was abusing the federal government’s temporary foreign worker program (TFWP) by bringing in temporary workers who would eventually take Canadian jobs home with them. In an April 8, 2013 conference call among CBC journalists, her reporting was challenged by Amanda Lang, who unknown to the journalists on the call had done speaking engagements at RBC-sponsored events and was in a relationship with a member of RBC’s Board of Directors.

Here is our conversation.

Do you recall Amanda Lang being involved in the RBC TFWP story prior to the April 8, 2013 conference call?

No. I had never spoken to her before that day.

To your knowledge, had Lang been brought in on or presented with the investigation you were leading before the conference call?

Not to my knowledge.

Had an on-air talent ever been involved in, or questioned, an investigation of yours like this before?

No – not like this.  That said, there is nothing wrong with asking questions or debating a story.  That’s a good thing – and an important part of healthy journalism.  When those debates happen, though, journalists assume none of us has any possible conflicts of interest – because the vast majority of us don’t.  If, in the rare case, we do have a conflict, it is expected and assumed we would declare it up front.

She had strong opinions about the essence of the story.  She argued hard that it was not about temporary foreign workers – that what RBC was doing was outsourcing.  I explained how we knew that RBC’s contractor iGate was bringing in temporary foreign workers – under two different visa programs – and that those workers for staying in Canada for extended periods – years, in some cases. Canadian workers were expected to train them, in this case, as their replacements.

She also argued essentially that outsourcing was a common business practice, and that the strong public reaction against it in this case was somewhat uninformed.

No. As far as I know, no one on the call was aware of any of that.  It wasn’t brought up.

If not, were any efforts made within the CBC by Lang or others to notify you of any of these potentials for conflict of interest?

No. The first anyone heard of it was when a blogger posted information about the upcoming speaking engagement sponsored by iGate.

What were your reactions upon learning these things?

I was very upset because of the perceived conflict of interest it created. Several people then questioned Lang’s involvement in the story – and questioned why she did not reveal any potential conflicts to us up front.

Were you assigned to do a segment on the RBC story for the World at Six that was then reassigned after the conference call with Lang?

I believe I was supposed to do World at Six. I was then told they didn’t need a piece from me after all. Tom Parry did file an Ottawa-based story for that newscast, though, so it was just that assignments had been juggled or unclear.

When were you first made aware of Amanda Lang’s interview with Gord Nixon? What was your reaction?

I remember seeing a clip of it on The National. I didn’t think much of it, until later – after questions were raised about a possible conflict.

Were you invited  to consult or supply notes and evidence when (CBC host) Christine Birak interviewed (RBC executive) Zabeen Hirji about your story on April 7, 2013?

Yes. Producers from CBC News Network consulted with me on Sunday for questions for RBC.

Were you provided with this opportunity when Amanda Lang interviewed Gord Nixon on April 8, 2013?

No. I was not involved in or asked about the Nixon interview.

Given the facts that have come to light about Lang’s connection to both iGate and RBC since your original story was broken, do you believe that there was the potential for the appearance of a conflict of interest in Lang’s journalism during the RBC TFWP scandal?

Yes. I said so at the time and I stand by that now.  The essential problem with all of this is the impression created by the potential conflict of interest. Conflicts or perceived conflicts – by anyone – cause everything to be viewed in a different light. I am far from alone in voicing that concern within the CBC.

Do you have a reaction to CBC News Editor in Chief Jennifer McGuire’s response to these conflicts of interest at the CBC?

As a result of this, many people – including me – are asking one simple question. Why it is ever OK to have any perceived conflict of interest, under any circumstances?

This is not about Amanda Lang.

It is about the long standing belief most journalists have – that conflicts should be avoided at all costs or explicitly declared up front. I come from the ranks of reporters who would go to a news conference and not even take a muffin or a cup of coffee.  These are deeply held views by the vast majority of journalists I know.  I heard a lot of people saying that today.