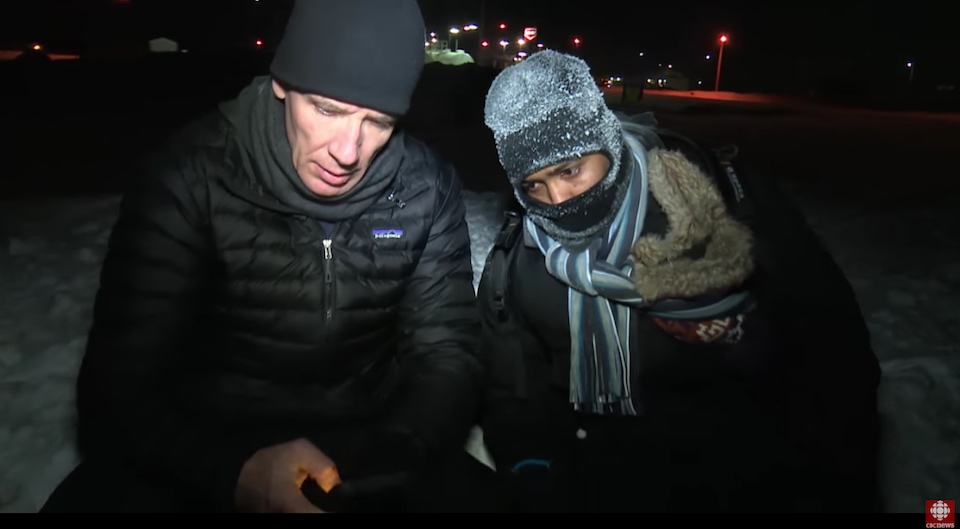 Correcting The Record On Refugee Crossings

Aris Daghighian is an associate with Green and Spiegel LLP and an Executive Member of the Canadian Association of Refugee Lawyers.

On the February 23rd edition of CANADALAND Short Cuts, pundit J.J. McCullough claimed the media’s reporting on refugees’ dangerous border crossings into Canada has been faulty — in service of what he views as a false narrative concerning “doe-eyed” innocents fleeing Donald Trump’s America.

But while Mr. McCullough accused other journalists of irresponsible reporting, the misinformation he provided when speaking on a highly sensitive and complex issue was far more reckless, repeating myths that have a tangible impact on how refugees are treated in Canadian society.

The notion that refugees are criminals absconding from justice, or breaking the law in order to jump the queue at the expense of more deserving immigrants and Canadian taxpayers, is false.

Refugees rightfully hold a designated place under Canadian and international law. They are not “illegal migrants.” Nor are they allowed to enter Canada as fugitives from justice or in place of skilled immigrants. Rather, they are offered Canada’s protection only if it is determined they are at serious risk of persecution or to their life if returned to their country of origin. The veracity of this risk is adjudicated at a full hearing at which evidence and testimony are reviewed at length.

We have seen countless stories of such stereotypes resulting in violence and discrimination against refugees and immigrants across Europe, the U.S., and here at home. On a local level, I have seen such perceptions affect the ability of refugees to obtain employment and be welcomed into community groups after arrival.

To refute three points raised in the interview:

1) No refugee claimant can avoid criminal charges or security investigations in the U.S. by crossing the border and making a refugee claim in Canada. As Mr. McCullough himself mentioned, a quick identity or fingerprint check would reveal their outstanding history in the U.S. The U.S. and Canada share all of their criminal records and investigation information.

Article 1F(b) of the international Refugee Convention excludes anyone from being granted refugee protection if they have ever committed a serious crime anytime, anywhere in the world. It should be noted that “seriousness” is defined broadly in this context. Moreover, Canada’s own laws under the Immigration and Refugee Protection Act bar the admissibility of anyone whom there are reasonable grounds to believe has committed a significant enough crime anywhere in the world; no conviction is necessary, just reasonable grounds to believe based on police reports or otherwise.

Finally, even if a refugee is admitted and granted status, they cannot avoid liability for an offence or ongoing investigation in the U.S. in the same way that any Canadian citizen cannot get away with committing a crime in the U.S. just by returning to Canada. There are extradition procedures in place and/or provisions which require the person to serve their punishment in Canada for the same length of time that they would in the U.S.

In practice, any significant criminal or security concern with a refugee results in either their exclusion or loss of status. Refugee protection is by no means a shelter for criminals.

2) The contention that Canada does not deport Somali nationals to Somalia for security reasons is incorrect. In fact, nationals of Somalia and most other countries are deported from Canada on a regular basis, either because an initial refugee claim is denied or they are granted status but later commit a crime in Canada.

There is a specific list of very few countries to which Canada has suspended all deportations because of grave conditions, but Somalia is not on it. The list includes Iraq, Afghanistan, and the Democratic Republic of Congo. Zimbabwe and Haiti used to be on it but have since been removed, so deportations to those countries are scheduled to recommence.

Deportations to Somalia have always been ongoing.

(“Certain regions” of Somalia do appear on the list of places for which there is an “administrative deferral of removals,” but the effect is that Somali nationals are simply deported to other parts of Somalia.)

The U.S., on the other hand, does have a blanket suspension in place for deportations to Somalia, which has been extended for many years, most recently through September 2018. Therefore, contrary to Mr. McCullough’s assertion, a refugee from Somalia whose claim for protection is denied faces a greater risk of deportation in Canada than in the U.S.

3) Mr. McCullough was correct in that there have always been individuals who cross the border from the U.S. into Canada to make their refugee claim here instead. But there has been a notable uptick in those numbers since President Trump’s election, with the CBC reporting that 452 asylum claims were made at the Quebec border in January alone, more than three times the year before.

Aside from those actually crossing the border, our law firm and others are receiving myriad inquiries from refugees and other immigrants in the U.S. who wish to come to Canada due to their fear of the Trump administration.

There are other general reasons why refugees may historically have chosen to cross the border to claim protection in Canada instead of the U.S. Many in the long run simply want to live in Canada over the U.S. and so would rather submit their claim here. This can either be because they have family or friends in Canada, or they believe that Canada will provide greater opportunities for success, integration, and employment should they be offered the protection they seek.

There are also those who believe Canada provides a more procedurally fair opportunity to have their refugee claim adjudicated. While our refugee determination system is far from perfect, it has notable advantages over the American system, including the fact that the U.S. process is exceptionally backlogged and delayed. This forces many deserving refugees to remain in a precarious state for many years before a final decision on their claim.

Not long ago, I had a Federal Court case that exemplified these issues. My client, a young Somali refugee, had reached safety in the U.S. only to be caught in legal limbo for over a decade. During this time, he remained a productive tax-paying resident yet was never granted any form of permanent status. Finally, he decided to cross the border in order to present his claim here. Ultimately, the court ruled in our favour, finding his claim for status to be thoroughly legitimate: “It is hard to conceive of a circumstance more qualifying as a refugee/a person at risk and in need of protection.”

It is important to correct the record in these respects, as perpetuating such mistaken information can be incredibly damaging to refugees and the treatment they receive after they arrive.

A recent poll showed that 41 per cent of Canadians think Canada is allowing too many refugees into the country, while only 11 per cent said the country should increase the number of refugees we accept. This is concerning not just for how refugees are viewed by the public at large once they arrive, but also for the effect that public opinion has on government policy: this year, Canada announced that it intends to resettle 15,000 fewer refugees than in 2016.

What journalists report and opine is often taken by the public at face value; therefore, it is incumbent on the media to be fully informed.