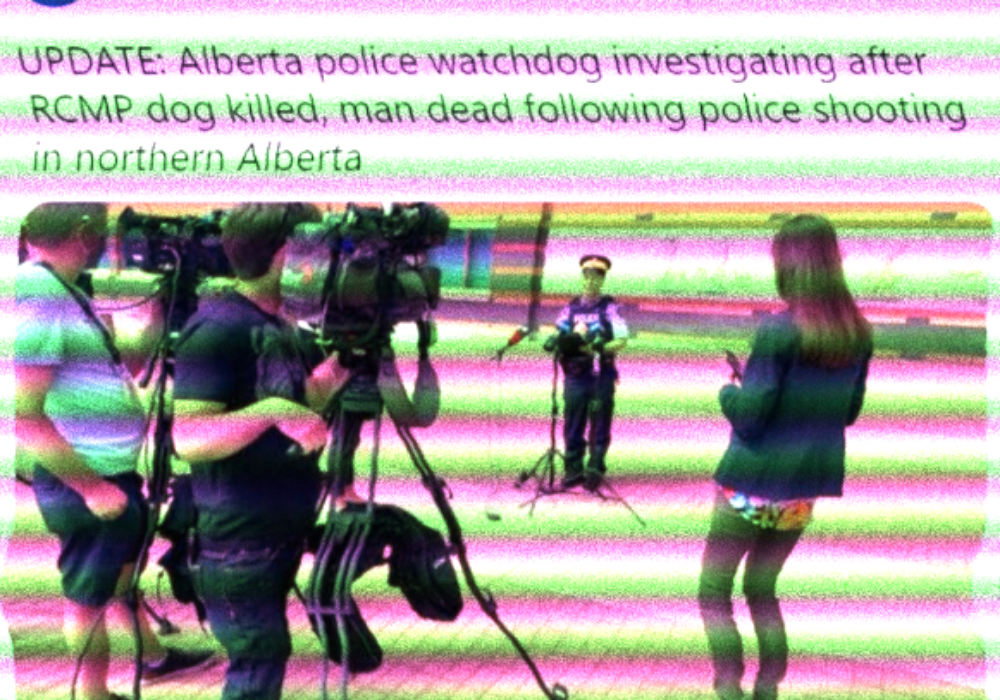 The dog was killed. The man? Well, he died.

You have to read five paragraphs into the piece to discover the name of the man, Lionel Ernest Grey. The article was first published as “RCMP dog killed, suspect believed to be armed and dangerous on the loose in northern Alberta: RCMP,” and little thought appears to have gone into how the story was updated to include subsequent developments.

We all like dogs, I know, but a Métis man was shot and killed in a political environment in which we are more aware than ever of state violence and structural racism against Indigenous people. Let’s spare a thought for the man. The RCMP will eulogize the dog. In fact, both RCMP Alberta and RCMP Saskatchewan have shared tweets celebrating the dog’s career.

We are saddened by the unfortunate on-duty loss of Police Service Dog Jago, as a result of the incident near High Prairie on June 17th. A partner, member, and friend, Jago will be greatly missed. pic.twitter.com/Bci7uRXodB

I’m not surprised when police organizations use obfuscating language, which they frequently do in news releases about police shootings or deaths in custody. Serious incident response teams and independent investigations units across Canada use this passive language that avoids attributing any action to anyone.

The second paragraph of the Global report: “The Alberta Serious Incident Response Team said it had been directed to investigate an RCMP officer-involved shooting that took place Friday near High Prairie and resulted in the death of a 29-year-old man.”

Wesley Lowery, in a New York Times column last year, singled out the phrase “officer-involved shooting” as a “clunky euphemism” journalists borrow because we are terrified of being called biased. “Moral clarity, and a faithful adherence to grammar and syntax, would demand we use words that most precisely mean the thing we’re trying to communicate: ‘the police shot someone,’ ” he wrote.

There’s a reasonable argument to be made that the serious incident response teams that investigate shootings want to avoid the appearance of rendering a verdict before they investigate. I don’t buy that this is the only reason for the passive language, but when something is produced by a bunch of bureaucrats, you can bet they will avoid attributing anything to anyone. Government just loves using passive phrases. It’s endemic and unlikely to change.

But why does the media feel like they have to use the same wording? The police, or government for that matter, can institutionalize a noun-phrase, but we in the media don’t have to use it.

It is an issue that comes up far too often in journalism. Massive workloads and precarious work leave people stressed and exhausted. So you see stories where language has been lifted right out of a government press release or report.

Without conscious thought, it is easy to adapt to the language used by the people we write about. Suddenly, officers who shoot people become officers who are involved in a shooting, and service dogs die in service, but men just shuffle off the mortal coil. We have to resist this.