The Bell Media executive responsible for Lisa LaFlamme’s dismissal from the CTV National News team has “decided to take leave” effective immediately, according to an internal email circulated to staff members Friday afternoon. 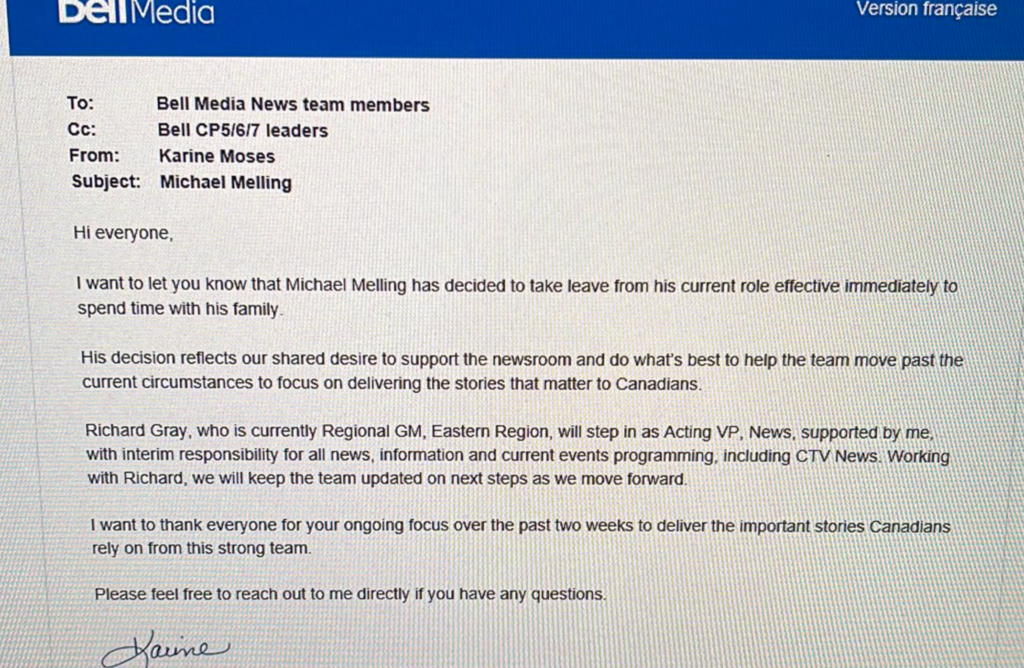 In the past two weeks, Michael Melling, the vice president of news, was accused of interfering with CTV’s news coverage in the firing of the national lead anchor LaFlamme, and of questioning LaFlamme’s decision to let her hair go grey. Last week, he faced pointed questions from staff in a tense town hall meeting.

The email alerting staff of his departure from his role does not indicate how long his absence will be, but says he made the decision “to spend time with his family.”

“His decision reflects our shared desire to support the newsroom and do what’s best to help the team move past the current circumstances to focus on delivering the stories that matter to Canadians,” the email reads, signed by Karine Moses, president of Bell Media’s Quebec arm, content, and news.

Richard Gray, regional manager of the eastern region will take on Melling’s role as acting vice president of news.

On Wednesday night, a source at CTV News tells Canadaland that the National News team was instructed to send a news script to Gray, an executive they had no prior experience with.

The piece, by reporter Heather Wright, concerned the ongoing fallout from the LaFlamme controversy, with consumer brands like Dove capitalizing on the incident to publicly support LaFlamme in their marketing campaigns.

According to two CTV sources, the piece was “gutted” by Gray, who ordered changes to the reporting, including, according to one source, the removal of Lisa LaFlamme’s Twitter video, in which she announced her exit from CTV.

The CTV National News team was so upset with the resulting piece that they did not air it.

On Thursday, they returned to the story, and this time did not submit it to Richard Gray. It aired unadulterated.

Clarification added on August 26, 2022, at 8:08 p.m. EDT, a previous version of this story stated that the story that ran on Aug. 25 by reporter Heather Wright was interfered with before it aired. However, her story was interfered with on Aug. 24 and did not run that day as a consequence.