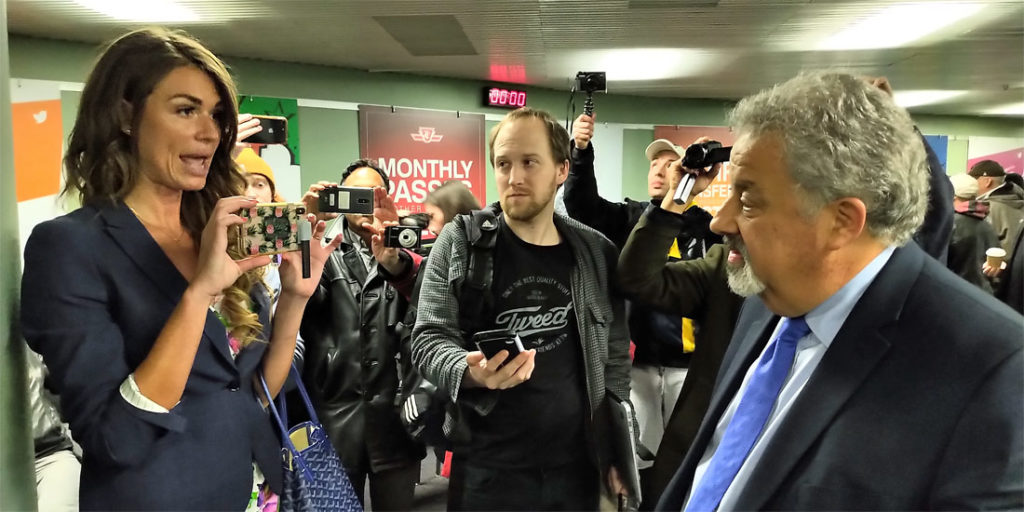 “The screen opens up with it, and I kind of do a double take,” he recalls. “Because it looks like one of my submissions.”

As a prominent lawyer in municipal election law, Siegel had prepared many submissions for compliance audit committees in the past, both in support of citizens requesting campaign audits and in defence of candidates who’ve been the subjects of requests. Some of his previous submissions, which begin with a multi-page overview of legal provisions and precedents before zooming in to the details of a specific case, can readily be found online.

He soon realized Goldy had copied more than the format.

“These are my words,” he says. “I recognize what I’ve written more than once.”

Indeed, the first four pages of Goldy’s submission [pdf] — an ultimately unsuccessful attempt to dissuade the committee from granting a request for an audit of her 2018 mayoral campaign — appear to have been lifted virtually word-for-word from Siegel’s template. She then added a little more than a single page addressing the allegations particular to her.

“And it just — it irritated me. This is somebody whose entire public persona is something that I fundamentally oppose,” he says of the white nationalist who finished a distant third in the October election with 3.4% of the vote.

He’s reluctant to describe the act as plagiarism, because, he says, lawyers borrow from each other all the time. “But duplicating the first two or three pages,” he laughs, “uh, not so much.”

The canny bootlegging pushed Siegel to get involved with the audit request, and he read up on Evan Balgord, the executive director of the Canadian Anti-Hate Network, who had filed the application against Goldy [pdf]. When he saw that his friend Bernie Farber was also with the group, Siegel volunteered to help flesh out the rather thin application and represent Balgord at the hearing.

“So because she ‘borrowed’ my material so effectively,” he says, “she recruited me to the other side.”

Asked if she was aware that Siegel was the lawyer from whose standard submission she’d copied several pages, Goldy claims that it was all very deliberate, based on some inside knowledge that he was already working on the file. “Yes, a source close to an Anti-Hate Network representative informed me, and I thought it would be hilarious to have their donors pay for his legal work when I could get it for free,” she maintains in a message. (Siegel assisted the Anti-Hate Network on a pro bono basis.)

The auditor will examine, among other things, whether Goldy improperly blurred lines between her campaign finances and personal bank account. In her submission (the part she actually wrote), she appeared to argue that geographic restrictions on campaign contributions don’t apply to funds that have been funnelled through a candidate’s personal account. The Municipal Elections Act states that contributors must reside in Ontario.

In a live-stream immediately following the April 29th meeting, Goldy also expressed concern that the names of “people who donated to me privately” would be released. The names and addresses of those giving at least $100 to a municipal election campaign are supposed to be included in mandatory financial statements that are then made public.

Goldy filed that mandatory paperwork just prior to the meeting, and just an hour before her failure to do so would have disqualified her from running in the next election. But she still missed the original March 29th deadline and thus had to pay a $500 late fee.

To take part in Toronto’s contribution rebate program, a candidate must also file copies of receipts and invoices for all of their expenses.

These are open to the public as well, and a look through Goldy’s offers a glimpse of the inner workings of her campaign — and raises further questions about how she ran it.

After Bell Media refused to run advertisements for Goldy’s campaign, she launched a public fundraiser to finance litigation to challenge the company’s decision.

During the fundraiser, Goldy said she was “accepting donations from supporters worldwide” and provided her personal website, Stripe account, Bitcoin address, and email for donations.

In addition, her expense filings show that, in reply to out-of-province residents who were refunded after they tried to donate via Interac e-Transfer, Goldy’s campaign said they could donate to her personally. The campaign provided her personal email address for them to do so.

Below are three such messages, where the campaign transferred back $250 in two cases and $100 in one case to out-of-province residents, and then provided an email for them to donate to Goldy personally. “If you wish to donate privately send to faithgoldy@gmail.com,” a message to one out-of-province supporter reads.

In response to a message from Canadaland inquiring about these replies, Goldy claims she sent them “To drive obsessed losers like you and Evan Balgord crazy while ensuring I complied with the Act all along!” In responding to Balgord’s initial application, Goldy said she donated $25,000 from her personal accounts to her own campaign, but no such contribution was recorded in the audited financial records filed with the city on April 29th. Balgord submitted that the audit of her campaign should examine whether money Goldy raised from abroad to her personal account was potentially transferred to her campaign, which would violate Ontario’s Municipal Elections Act. (Individuals can give up to $2,500 to a candidate for mayor of Toronto, but the candidate and their spouse can collectively contribute up to $25,000.)

In her submission, Goldy said she “did not, through act or omission, deliberately violate any campaign financing laws, and hence, any improper donations received during the campaign, either via e-transfer to the campaign account, cheque, or [election platform] NationBuilder, were returned in full.”

However, on April 30 the American website Right Wing Watch reported Goldy “had solicited funds via encrypted money-transfer formats from far-right activists outside of Canada” — but Goldy denied the allegation, saying on Twitter that RWW is “erroneously claiming my campaign accepted illegal bitcoin donations.”

Goldy’s campaign spent over $10,000 on aerial services, paying a Markham-based vendor to fly a plane with a banner reading “FAITH GOLDY FOR MAYOR” over parts of downtown Toronto on the afternoon of the election.

While the novelty expense was a hefty bottom-line item, it was Goldy’s lawsuit against Bell that netted the biggest payday for one vendor.

Lawyer Clayton Ruby — who represented Goldy — billed her campaign for $64,973.06, including taxes. An invoice filed with the City shows Ruby received $55,000 transferred in three instalments, and lists a $9,973.06 balance owed as of October 17, 2018. This was separate from the $43,117.90 in costs she had to pay Bell following the unsuccessful court application.

Facebook acted as a paid vendor for Goldy’s campaign, months before claiming she “spread hate”

Two Silicon Valley tech giants that have faced criticism for lending their services to far-right figures, including white nationalists, also acted as vendors for the Goldy campaign, according to invoices filed with the City of Toronto.

Menlo Park, Calif.-based Facebook — which banned Goldy from its platform in April 2019 — issued receipts to Goldy’s campaign for no less than $2,663.75 in advertising campaign services run for her campaign in October 2018.

When it banned Goldy from its platform, Facebook said that she and others who “spread hate, attack, or call for the exclusion of others on the basis of who they are have no place on Facebook,” and cited the company’s policy on “Dangerous Individuals and Organizations.” Months earlier, as these invoices show, Facebook took money from and provided services to her campaign.

Asked how she feels about Facebook having taken her money for ads just a few months before banning her, Goldy says, “My purchased ads served their purpose, so no loss there.”

Goldy’s campaign also includes a $900.37 invoice for “Reimbursement for Facebook Ads” from an anonymous vendor — no information on the person or organization who provided the service is listed on the invoice, which has an unaltered “replace with LOGO,” presumably because the vendor used a template file.

City of Toronto staff told Canadaland that this is how the document was provided by the Goldy campaign. (In a message, Goldy declined to elaborate on the invoice, except to attribute it to “Vladimir Putin.”)

Meanwhile, Mountain View, Calif.-based Google invoiced a Goldy staffer for $1,168.68 in online ad campaigns in October 2018 (the campaign used a promo code for $129.92 off). Google has not taken a stand on Goldy, and unlike Facebook has allowed her to continue to publish material on its platforms, most notably the video-streaming site YouTube.

Goldy’s campaign, which was previously reported to have used volunteers from the far-right white nationalist group ID Canada, paid $1,000 to one of its most prominent suspected members.

Tyler Hover, who Anti-Racist Canada has identified as a likely leader of ID Canada and former regular on the Stormfront message boards, provided content and website development services to the campaign, an invoice shows. The email address listed on the invoice uses the same handle as one of Hover’s suspected Stormfront accounts. (He did not reply to a request for comment.)

ID Canada rebranded from its original name, Generation Identity Canada, in 2017 following the Charlottesville riots. While it was founded as a domestic chapter of the far-right international Generation Identity movement, the group claims it is no longer an affiliate.

“ID Canada was created as a response to Canada’s decaying identity, increased third-world immigration, and the prevalence of anti-European sentiments in this country,” reads the organization’s website.

Posters by ID Canada calling on people to “Defend Canada” and “Join the Fight” have appeared in the Greater Toronto Area and in Hamilton this year. Last month, it was reported that police in York and Durham Regions were investigating the posters.

As to how she came to hire Hover to develop her website, Goldy explains: “It’s a vast right-wing conspiracy thing, you wouldn’t get it.”

Top photo of Faith Goldy meeting Jack Siegel — and pressing him on the consequences of the committee’s decision to audit her — taken by Jonathan Goldsbie.