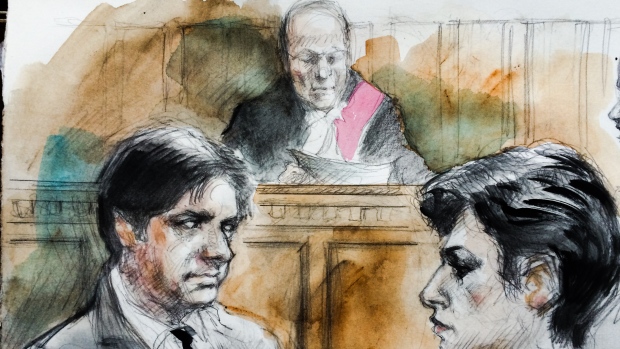 Marie Henein’s brother and Justice William Horkins’ son work at the same firm, Cassels Brock, CANADALAND has learned. To our knowledge, this relationship was not publicly disclosed before the Ghomeshi trial began.
News Brief By Jane Lytvynenko
Share

Marie Henein’s brother and Justice William Horkins’ son work at the same firm, Cassels Brock, CANADALAND has learned. To our knowledge, this relationship was not publicly disclosed before the Ghomeshi trial began.

Lawyer Peter Henein is a partner at Cassels Brock and is a part of the firm’s Advocacy Group. Lawyer Chris Horkins is an associate in the same group. The firm itself has “more than 200 lawyers based in Toronto and Vancouver,” according to its website.

According to a senior partner at Cassels Brock, Chris works “with and for Peter.” He said the Advocacy Group includes 39 or 40 lawyers.

“I guess we prefer to say ‘with him,’ but he works with and for him,” the partner said.

As a Cassels Brock partner, Peter Henein assumedly has influence over the future of Chris Horkins’s career at their firm, as any of the firm’s partners would.

The two have worked on at least one case together. It’s possible they’ve worked on other cases which were settled out of court, or just didn’t proceed for other reasons.During the first week of the Ghomeshi trial, Cassels Brock sent three delegates to a conference in New Orleans. Henein and Horkins were two of them, according to the firm’s newsletter.

Despite numerous profiles of Justice Horkins and Marie Henein in the build-up to the trial, this connection was never mentioned. To our knowledge, it was not disclosed to the public before the proceedings began, but it’s possible that a disclosure was made to the Crown in-camera.

We’ve asked Marie Henein, Peter Henein, and Chris Horkins for comment on the story but none of them have responded. Justice Horkins declined to comment. If any of them get back to us, we will update the story with their responses.

It’s unclear whether this connection constitutes a clear conflict of interest. The Canadian Judicial Council’s Ethical Principles of Judges (PDF) guide says, “Judges should organize their personal and business affairs to minimize the potential for conflict with their judicial duties.” It says the perception of the conflict of interest should also be considered. The Law Society of Upper Canada’s Rules of Professional Conduct (PDF) says the “lawyers’ judgment and freedom of action on the client’s behalf are as free as possible from conflicts of interest.”

Some don’t think this is an issue. “This relationship is too tenuous to require acknowledgement or to create any problems,” said Clayton Ruby, a lawyer who deals with criminal law. Others we spoke to echoed this sentiment, and said entanglements like this are very common in Toronto’s small and interconnected legal community.

David Tanovich, a law professor at the University of Windsor who writes about ethics said, “No person looking at these facts realistically and practically would conclude that there is the slightest chance the judge would be unable to decide the case fairly simply because his son works in the same large law firm as defence counsel’s brother.” He added that in his opinion to publish a story that would inform the public about this relationship would be “irresponsible.”

But a Toronto lawyer, who asked that his name not be used, said these common overlaps between lawyers and judges is themselves a problem. He is concerned about the optics of the relationship. He feels it should have been disclosed.

“I don’t actually think this affected Justice Horkins’ view of the case, his judgement, or the way he decided on the case, but I do think lawyers and judges have an obligation to the public for there to be an appearance that justice is being done and there’s an appearance justice can be done in a neutral and fair way,” he said.

He also said “every time the judge allowed Henein to pick away at complainants a little bit over Crown objection, someone could have been wondering, ‘why is he letting her do that?’ I think the victims would have like to know.”

He recognized conflicts are an issue lawyers have to deal with all the time but said especially in a high-profile case like Ghomeshi’s, “When you have a situation that puts a justice in a potential conflict or a potential apprehension of a conflict, that’s a problem.”

He worries about the public perception of the relationship and how that affects faith in the justice system. “There’s clearly a disconnect there between how the system works and how the system should work.”

It’s possible the connection between the Heneins and the Horkins does not constitute a conflict of interest. But, if so, in a high-profile case like this where the public’s trust in the justice system is being challenged — why not just disclose it?