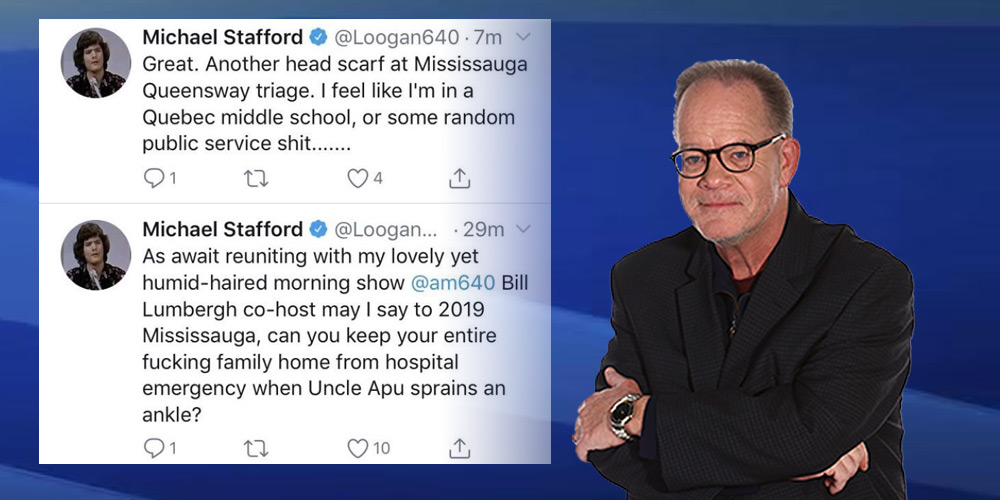 Toronto morning show host Mike Stafford is expected to return to the airwaves on Monday, according to sources at Global News.

Global News began an investigation into two tweets posted and then deleted from Stafford’s Twitter account on July 21. The tweets disparaged Muslims and South Asians at Mississauga Hospital. This week, broadcaster Peter Shurman filled in for Stafford on The Morning Show, which Stafford co-hosts with Supriya Dwivedi (formerly a co-host of Canadaland’s COMMONS) on Global News Radio 640 Toronto.

“Our employees are bound by stringent social media policies that we take very seriously,” a spokesperson for Corus, Global’s parent company, told Canadaland in an email Wednesday morning.

“That being said, we don’t have further comment on this internal matter.”

Employees within Global News tell Canadaland that they were upset by the tweets. Stafford did not respond to requests for comment.

Global management scheduled a meeting with Stafford on Wednesday afternoon, according to people at the company.

Stafford tweeted Monday evening that he expected to be fired:

Yeah, I’d play that tommorow execept I’m not working and have likely been fired! Peace, brother!

Stafford joined AM 640 when it relaunched as Mojo Radio in 2001, after spending 14 years at CFRB, also known today as Newstalk 1010.

In late 2017, Corus brought AM 640 and other talk stations across the country under the new Global News Radio brand, following Corus’s acquisition of the Global television network from Shaw Media.

In December of that year, AM 640 fired Gary Bell following the broadcast of antisemitic tropes on his weekly show.

Last year, the station parted ways with regular contributor Lou Schizas, three months after he had claimed on air that migrant children detained by the U.S. government were in fact “actors.”

On Tuesday afternoon, Stafford appeared to eulogize his own career:

I've lived a charmed life with a career that allowed me to interview everbody fron Pearl Bailey to Midge Ure to G. Gordon Liddy. My one last request? I would love to talk to Tony Visconti. Music producer geek in me talking.

Sean Craig worked as an online journalist for Global News in 2017.