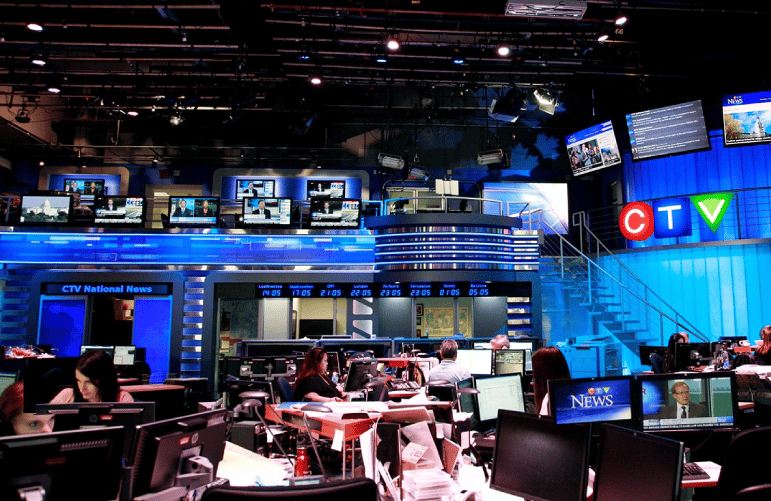 "So it had nothing to do with her age, her gender?"
News Brief By Sarah Lawrynuik
Share

On Thursday, Bell Media executives invited staff to a town hall meeting via an email in which they described media accounts of the company’s dismissal of chief anchor Lisa LaFlamme as “filled with false narratives.”

Below is an abridged transcript of the town hall. The names of those asking questions are not included. However, the questions were posed by all levels of staff, including the executive producer of the national news team, Rosa Hwang. Sandie Rinaldo, the anchor tasked with hosting the national newscast in the interim until the new permanent anchor, Omar Sachedina takes over, was also among those who posed bracing questions to management during the tense meeting.

On Friday morning, Bell Media announced the company would be launching an independent third-party workplace review of the newsroom.

Michael Melling: I know the team is hurting right now. And I’m sorry for that. I’m also not going to speak publicly or in the media about this, which for me personally is very tough. So I think we’re open to taking whatever questions are asked.

Staff Question: First and most important, in light of the trust Lisa has with viewers and in light of the fact that this transition came as a shock to viewers, what is the strategy for repairing the damage to public trust?

Karine Moses: It’s all about what we do every day. So we have to keep doing what we’re doing. And the trust is still there. And Omar is a trusted journalist, he’s fantastic. I think we’ll turn the corner on that. We acknowledge that there has been damage, but I strongly believe that our strength is there. So let’s just keep doing what we’re doing the best, it’s covering news for Canadians.

Michael Melling: And I would also add — absolute full respect to Lisa — but also the trust is also in the team. This is a great team of journalists who do outstanding work, and Canadians trust this team.

Staff Question: What’s the vision for CTV National News going forward? And what made you believe a change in chief anchor was necessary to implement it?

Karine Moses: The vision is clear. We’re going to share it with you guys. We will engage you. But in terms of changing the anchor, sometimes you look at it honestly, there’s a couple of things you want to change. And unfortunately, that’s what was one of the things that we felt that we needed to move on.

Staff Question: Can I ask a followup? Can you pinpoint journalistically what we needed to change?

Karine Moses: It’s not necessarily pinpointing a specific thing. Like I said, when we’re making business decisions, we’re making it holistically. We look at different things. We look at the vision of where we want to go, and there are a lot of journalists in this room and across the country—

Staff Question: (interrupts) – But with reference to Lisa, were there any other factors that made you think she wouldn’t align with the vision? Age? Hair colour?

Staff Question: So it had nothing to do with her age, her gender?

Karine Moses: Not at all. Seriously, I’m a woman. I’m a woman. I’ve been here for 25 years. And do you really think that I would fire a woman because she’s a woman?

Staff Question: So she was fired?

Karine Moses: That’s not what I’m saying. But you know what I mean.

Staff Question: Why was it considered a good idea to announce Omar’s appointment the same day?

Karine Moses: There were multiple reasons why the decision was made to announce it at the same time. In retrospect, I think we shouldn’t have done it this way.

Staff Question: Maybe you could explain a little bit about what the actual plan was, since we were kind of bashed over the head on Monday on Twitter? So I’m wondering what the plan was for Lisa to leave and Omar to come if he hasn’t really been (heard from). Did you expect he would just show up and there’d be no questions? No one would ask what happened? The gaps are huge.

Karine Moses: So this is what we’re trying to say, guys, like, the goal of being very honest and booking those meetings to build the vision and the plan that goes with the vision is a way of engaging that team. So this is one of the things we want to do. And if anybody has something to say and they want to talk to us, the doors are open.

In terms of the sequence of what happened, unfortunately, there are a couple of things that cannot be shared. We could not share it with you before it went public. So that’s one of the things, unfortunately. So things happen very fast, very quickly. So unfortunately, it looked a little bit disorganized, but it was very well-sequenced.

Staff Question: The elephant in the room is all the negative press that’s out there. (The public) has been saying things like, ‘We won’t watch this newscast anymore. We don’t trust Bell Media, it’s not a good place to work.’ How do you begin to explain to them and bring them back? To rebuild that trust?

Michael Melling: I think it’s a great question, and I hear where you’re coming from. I think we have built that trust over 60 years and there is currency there. It’s definitely been difficult, but I do feel that if we focus on moving forward, as a team from this, and on what we do as journalists, we will be able to rebuild and push forward on that 60 years of trust we’ve worked so hard to build over the years.

Staff Question: Morale in the newsroom has been horrible for months. We’ve been bleeding staff at News Channel. I can name at least a dozen people who have left. If this is a company that is so keen on promoting mental health, why is it that no one is checking on the mental health of its own staff?

Karine Moses: There are a couple of things we need to look at: Where do we need to have more people? How do we rebalance work? This is all part of the planning division, so it is something that will address that concern for sure, because we know that there are areas of this business that are bleeding. So we need to address that.

Staff Question: You talked about Omar and making sure his profile is positive, well, as somebody who’s spent a lot of time online recently — it’s not. And a lot of damage has been done to his profile, because I think the public consensus is right now it looks like Omar stabbed Lisa in the back. And so I guess my question is: going forward with a new direction in mind, how can we repair that damage to a man’s reputation? And a man who is a dear friend of mine and who is now expected to be the face of our company?

Karine Moses: I think it’s going to take time. I don’t think we have to put our heads in the sand. It might take time, but I do believe that we’re going to turn the corner on that and we’re going to build something solid for him. He’s on the board and he’s involved in all those conversations.

Michael Melling: I would say, I certainly hear you. And we are committed to Omar. I had a conversation with him this morning. I don’t think he’d mind me saying he knows that. And we are going to work as hard as you possibly can to deal with the issue.

Staff Question: I’d just like to return to the issue of morale, which is safe to say we’ve never seen so low. Is there a plan in place — apart from having meetings — to try to improve morale, improve the culture, so that we can attract talent, and have people feel good again about coming to work?

Staff Question: But how do we do that?

Karine Moses: That’s a big question. And that’s why we need to work together. And I don’t have the magic answer, but we’ll have to figure it out. And Bell Media is a fantastic place to work, so we need to make sure that it’s the same feeling here at CTV News. So if you guys are telling me the morale is not good, I don’t like it. It should not be like that. We come here every day to work. We should feel good about where we work. So if you guys have any ideas or give me any in on why the morale is not good, I would like to know because we need to fix that.

Michael Melling: If I understand the question correctly, this is a layered challenge for the organization. It’s gone on for a while and there’s so many different layers to it. It can include things like resource allocations, the way things are sometimes structured, sometimes the way feedback is provided. There’s a lot of conversations we can have to move that conversation forward.

Karine Moses: Thank you very much.

Clarification added on August 19, 2022, at 2:08 p.m. EDT, amending a staff question that a previously read that Omar Sachedina hadn’t been “heard from for months”. The question has now been amended to simply say he hasn’t been “heard from” as the qualifying words in the question are barely audible in the recording obtained by Canadaland.