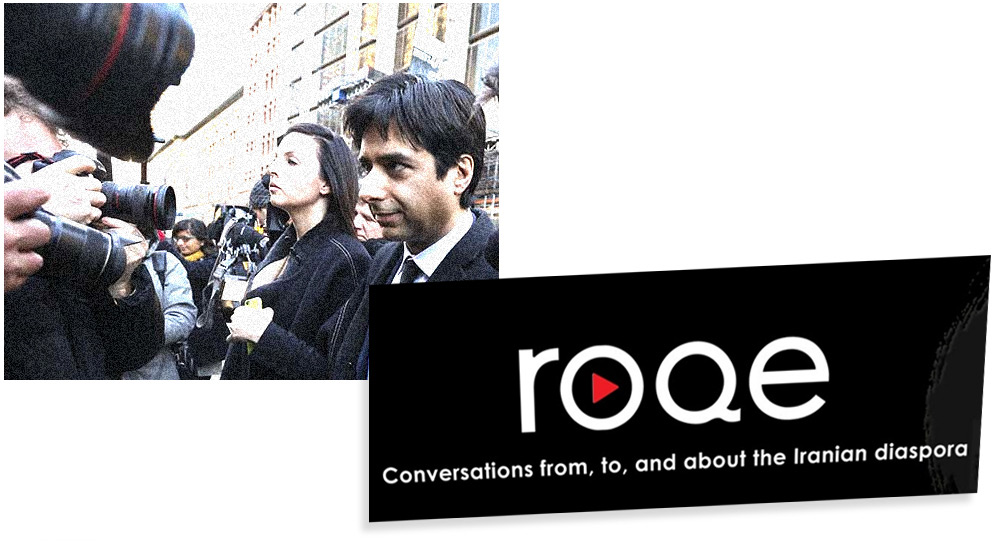 And this time, he has unnamed investors and the support of a prominent member of the Iranian-Canadian community
News Brief By Jonathan Goldsbie
Share

Jian Ghomeshi’s first attempt to return to the public eye was widely mocked. “The Ideation Project,” as he branded his 2017 series of mostly self-produced monologues, sputtered out after two months and a dozen six-minute episodes. The website now results in an error page.

His next effort, the following year, involved an error-riddled personal essay in The New York Review of Books, part of a cover package on “The Fall of Men.” He downplayed the accusations of sexual assault and misconduct made by over 20 people, while assuring readers that women still reach out to him for sex. The piece sent the magazine into turmoil and resulted in its editor-in-chief getting fired.

Now Ghomeshi is back once again, attempting to bring his talents to Canada’s Persian community and the global Iranian diaspora. And this time, he has the benefit of unnamed investors and the support of a prominent member of the Iranian-Canadian community.

Roqe, a new Ghomeshi-hosted podcast focusing on “the in-depth life stories, opinions, and identities of personalities in the Iranian diaspora,” quietly launched in mid-April, and has published seven episodes ranging from 36 to 75 minutes in length. Far more slickly produced than his Ideation experiment, it’s the work of an “amazing little team that puts this together each week,” per his shout-out at the end of the latest instalment. The logo evokes those of two CBC series he hosted, Q and >play.

“Roqe” is a Farsi word that, as Ghomeshi explains in the first episode, translates as “candid, or straightforward in conversation.” Nine guests have so far been featured; the next edition is slated to include a pair of “well-known” actors of Iranian descent, one based in Bollywood, the other in Hollywood.

On February 4, Roqe Global Media was incorporated as a for-profit business by Mehrdad Ariannejad, the CEO of Tirgan, a registered charity whose marquee initiative is a biennial festival of Iranian-Canadian arts and culture in Toronto. He and Ghomeshi serve as the sole directors of Roqe Media, which occupies space on the same floor of a North York office building formerly used by Tirgan.

In an interview with Canadaland’s Jesse Brown, Ariannejad explains that there is no connection between the two organizations. Roqe is currently just a small company, employing two or three people on a part-time basis plus some volunteers. Ghomeshi, he says, is not currently being paid.

The founding member of the Iranian Canadian Congress (ICC) and recipient of a Queen’s Diamond Jubilee Medal considers Ghomeshi a friend and says he “never believed” many of the women who came forward.

Jesse spoke to Ariannejad about his vision for the show, its business model, and why he feels it’s appropriate to put Ghomeshi at the centre of a project intended the highlight the achievements of his community.

Their conversation has been edited for length and clarity:

How is Roqe Media funded?

It’s privately funded by me and some other investors. But you know, it’s not a huge fund. It’s not a million-dollar investment.

Is the goal to eventually have advertising?

Given that Jian Ghomeshi was accused by over 20 women and men of sexual assault, misconduct, harassment, very serious accusations, do you feel he’s an appropriate host for a show about exploring and celebrating the Persian diaspora?

First of all, he was acquitted. And secondly, I’m not judging anything. But anyone in his or her life should be given the chance to come back to society. All of us, we make mistakes.

There were also more than a dozen accusations that never resulted in criminal charges.

So why didn’t they go to court?

Do you feel they were not telling the truth?

Do you feel that the Persian diaspora accepts Jian Ghomeshi as a representative?

As a representative, I don’t know. But as somebody who can do one job, and it’s interviewing people and trying to bring everybody together and try to talk about different perspectives, different ideas and opinions, I think yes.

You think they accept him as someone who’s trying to bring everyone together?

No, the ideas together, not people together. Just the ideas.

What are your ambitions for this project?

I hope that we can connect the Iranian diaspora globally and bring ideas together, make people aware of such personalities in the world and their contributions to the world. Because we do have so many people who are contributing to the world in science, in politics, in everything.

Do the guests on the show know that they’ll be interviewed by Jian Ghomeshi?

Are they aware of the past charges and accusations?

Absolutely. We are very clear with everybody. We let them know in advance that, you know, this happened to Jian, and if they don’t feel comfortable, they can refuse to be interviewed.

Is the business co-owned between you and Mr. Ghomeshi?

This is co-owned between many people. Not just me.

Who are the others?

I can’t reveal that, unfortunately.

One of the owners is Mr. Ghomeshi?

I’m afraid I can’t tell you that. I can tell you I am one of the owners.

Is there anything else you think people should know about the project?

Over the past 40 years, many Iranians emigrated from Iran because of the current ideological regime. And they immigrated to many different parts of the world. And I myself had this idea to connect them somehow. And this is one of the ways that I think we can help this community, the Iranian diaspora community.

Did you see this as a way to help give Jian Ghomeshi another chance?

Are you concerned about the people who say he hurt them?

Absolutely, I’m concerned. I’m concerned about any individual or any human being who is hurt in a relationship. But these things are not for me to judge. Because the personality I know, the Jian I know, is not a person who does these things. So that’s why I never believed that many of those women who came forward and went to courts. I didn’t believe them.

Update (May 9, 2020, at 6:25 p.m. EDT): Iranian Canadian Congress president Soudeh Ghasemi says that the organization is “extremely disturbed by comments made by Mehrdad Ariannejad speaking about the accusations of sexual violence against Mr. Ghomeshi” — that he “never believed” many of the women and that “many successful people have their enemies and friends.”

“These comments in our opinion are unacceptable and extremely disturbing,” she says in a statement, adding that they “would like to clarify that Mr. Ariannejad currently has no executive role at the ICC and he does not represent the point of view of the ICC on this issue.”