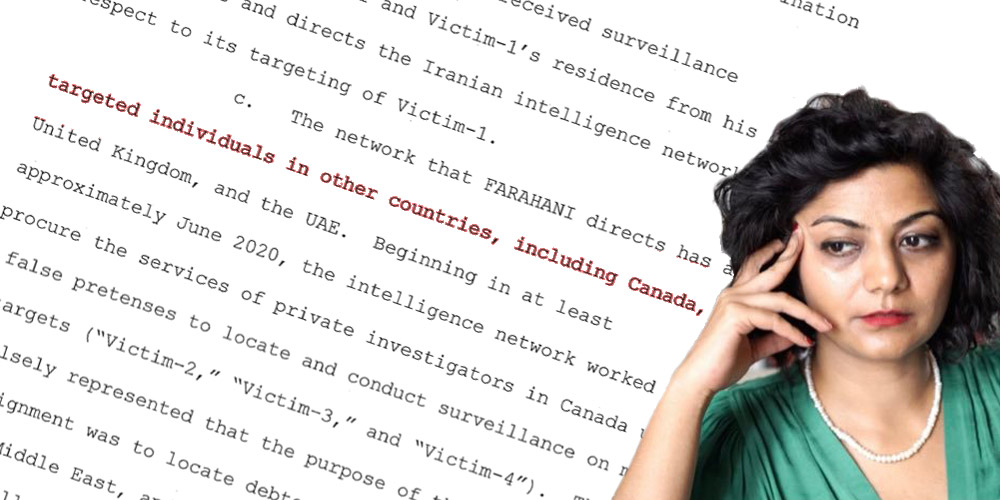 “Somebody is following them to their homes, tracking them”

A recent U.S. Department of Justice indictment revealed that journalist and women’s rights activist Masih Alinejad was the target of a plot by the Iranian regime to kidnap her from her home in New York for rendition back to Iran.

But it also mentioned that there were other victims of similar plots — including three unnamed people in Canada.

The revelations in the indictment come on the heels of calls by journalists, activists, and dissidents in Canada from countries such as Iran, China, Mexico, and Pakistan, who say that they have been victims of threats and intimidation by what they believe to be foreign actors. In one case, involving Pakistani activist Karima Baloch in Toronto, these threats ramped up before her unexpected death.

In this week’s episode of CANADALAND, our reporter Cherise Seucharan delves into who these dissidents are, why they are being targeted, and what action the Canadian government has taken to protect them.

Alinejad has never been quiet about her dislike for the current Iranian regime.

As a journalist in Iran, she came under fire for her critical coverage of Iranian parliament and elections — and because of this was fired from her job as a parliamentary reporter in the early 2000s. After that, she started a Facebook page called “My Stealthy Freedom,” which invited Iranian women to post pictures of themselves without the compulsory head-covering. It garnered over one million likes and earned her the Geneva Summit for Human Rights and Democracy’s women’s rights award.

Now living in the U.S., she’s a host of the Persian Voice of America’s Tablet, a TV show which profiles Iranians and developments within the country. But even in the U.S., the threats to her and her family haven’t stopped. According to news reports, her parents are frequently harassed and threatened. In 2019, the regime also arrested and imprisoned her brother, Alireza, who was then sentenced to eight years in prison, a decision which Amnesty International has condemned.

But despite this, she still found herself shocked at what the indictment revealed. It contained details of a network of Iranian agents who procured around-the-clock photos and videos of Alinejad and her family in Brooklyn, their visitors, even records of objects around the house. Evidence shows that they were looking into using speedboats out of New York City, and maritime routes to Venezuela, as well as direct routes to Tehran from her house.

“I honestly cannot believe that in New York, the Islamic Republic was allowed to threaten and follow an American-Iranian citizen,” she told CNN’s John Berman in July. “I’m not as scared of being dead or being executed, but what scares me is that the whole world keeps silent about such a regime, and allowing them to have such an operation in the United States of America.”

While the indictment doesn’t mention any of the alleged victims by name, Alinejad chose to go public about the plot against her and speak out about the regime. But there has yet to be any information released about the three alleged victims in Canada.

“Canada firmly condemns Iran for its pattern of intimidation and foreign interference,” says John Babcock, spokesperson for Global Affairs Canada. “We take this issue very seriously, and Canada will continue to work in close collaboration with allies and partners around the world to counter foreign interference and to protect journalists.”

According to the Coalition for Women in Journalism, many journalists and activists from Iran, Pakistan, China, Mexico, and more say they have experienced threats from what they believe to be foreign agents while living in Canada.

Founding director Kiran Nazish says that the indictment helps to confirm the existence of these foreign actors.

“These journalists have told me that they feel somebody is following them, following them to their homes, tracking them while they’re going back and forth in the subway,” she says.

“So these kinds of reports that come out of the court are helpful because they shed light and solidify our suspicion that some of these exiled journalists are being followed.”

She adds that if Alinejad had been kidnapped, “she would have certainly been taken back to Iran and put into a prison, possibly tortured.”

Baloch, also known as Karima Mehrab, was a leader in the fight for Balochistan independence, but faced harassment and threats from the Pakistani government. After she escaped in 2015, she was granted refugee status in Canada. But her friends and family said that while in Toronto, she still faced threats and had seen suspicious people around her home taking photographs. One night, she went for a walk in downtown Toronto and was later found dead near the waterfront.

“I had met her several times right before she was killed,” says Nazish. “I think that, you know, that case is very suspicious because when she was found dead in Toronto, the Toronto police said that this was a common cause…while the family kept on saying this is not a common cause, and we think that she was killed by the Pakistani state.”

Canadian media has also reported extensively on Chinese interference in the lives of Hong Kong pro-democracy activists in Canada, who report stalking and intimidation, with one even getting death threats to a hotel room in Vancouver where she was staying under a fake name.

In November 2020, MP Garnett Genuis introduced a parliamentary motion calling on the government to address “significant and sustained foreign interference activities” and to introduce new protections. In a press conference, three dissidents came forward about receiving threats from what they believe to be agents of Iran, China, and Russia, including one Edmonton student who had criticized the Iranian government after his wife was killed in the Ukrainian International Airlines crash.

Dissidents experiencing these kinds of threats have reported their concerns to Canadian law enforcement, says Nazish, but concrete action is rarely taken. She’s even more concerned, now that the Ministry of Immigration, Refugees and Citizenship has committed to resettle over 250 human rights defenders over the next few years.

“What they should be doing is to have a system where they are in constant communication with the intelligence agencies, both in the U.S. and Canada,” she says.

“Canada needs to publicly say that we will protect those journalists and human rights defenders who live in Canada in exile.”