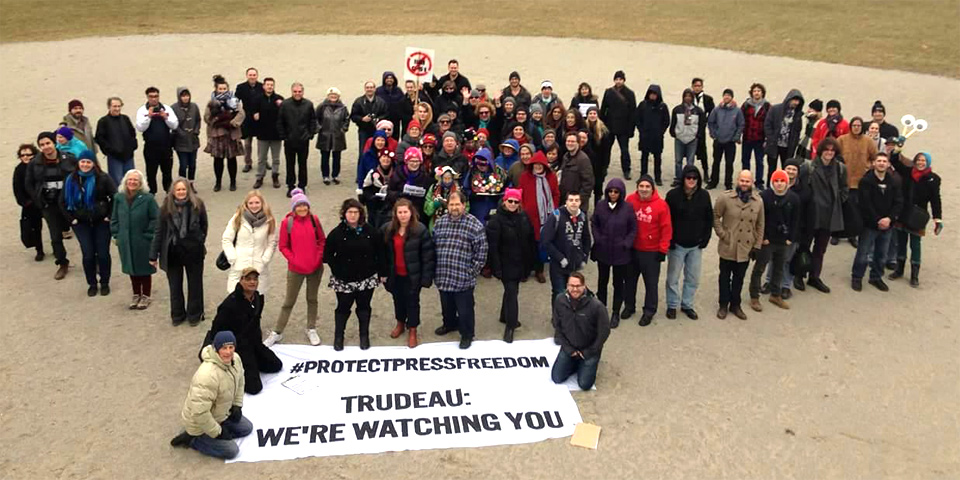 How Justin Trudeau Is Failing Journalists

On matters of surveillance, source protection, and access to information, there are concrete things the government could be doing but isn't.
Article By Evan Balgord
Share

On February 25th, a group of 150 demonstrators gathered on a cold Saturday afternoon in Toronto’s Trinity Bellwoods Park to call on the federal government to pass legislation to protect press freedoms. The rally, put on by Canadian Journalists for Free Expression (CJFE), aimed to put pressure on Prime Minister Justin Trudeau to end mass surveillance, repeal the sweeping Anti-terrorism Act also known as Bill C-51, and support a bill to protect the confidentiality of journalists’ sources. Similar rallies were held in smaller numbers across Canada.

“There was a lot of hope when Trudeau came to power that things were going to change,” says CJFE executive director Tom Henheffer. “But there haven’t been any legislative changes yet.”

It’s tempting to compare ourselves favourably to the United States, where the White House is openly hostile to the media and public trust in the fourth estate is dwindling. But Canada has serious press freedom issues of its own: Bill C-51 makes advocates, activists, and journalists targets for state surveillance and disruption; a legal precedent may soon be set that journalists can’t protect their confidential sources; and outdated access-to-information legislation makes it easier for Canadian governments to be unaccountable to the public.

Organizations like CJFE and the Canadian Association of Journalists (CAJ) are advocating for legislative changes to protect journalists and the roles they play in keeping governments accountable.

Here’s a breakdown of three issues on which the government is failing to act:

What it is: Widely panned for giving Canada’s security apparatus too much power with too little oversight, the Conservative government’s Bill C-51 was passed in 2015 with the Liberals’ support. But the Liberals promised that, if elected, a Trudeau government would repeal or otherwise address the law’s problematic and unconstitutional provisions.

What’s at stake: Canadians are under constant, warrantless mass surveillance, and journalists are more likely than the average Canadian to research sensitive topics or speak on the phone with activists and demonstrators — likely raising red flags and making them targets for further surveillance. Provisions in C-51 allow for the free flow of information between the arms of Canada’s security apparatus.

Also under the law, protesters and advocates can be labeled terrorists and subjected to surveillance by CSIS, RCMP, and provincial and municipal police. Any journalist who communicates with activists as part of their job can also be subject to surveillance. Sharing press releases or reporting on anti-pipeline protests can be defined as “promoting terrorist offences” and make journalists targets of surveillance and disruption.

What the Liberals promised: In their 2015 election campaign, the Liberals pledged to establish a national security oversight committee composed of members from all parties. They also promised to make sure that the Anti-terrorism Act doesn’t prohibit lawful protests and advocacy, and to amend vague definitions such as “terrorist propaganda.”

What’s actually happening: So far, they’ve kept their promise to launch public consultations, which ran from September to December of last year. A report on those will be made public some time in 2017.

But in the meantime, Bill C-51’s provisions are in full force. CSIS has used its new disruptive powers at least two dozen times — which can include tampering with communications or bank accounts, restricting travel, and hacking devices to obtain information.

In November of 2016, a CSIS official said that they might have surveilled journalists, promising to share more details. CSIS later refused to confirm or deny whether journalists have been targeted for investigation. CJFE filed a formal access-to-information request on the subject, but will have to wait. CSIS says they need an extension of 540 days to fulfill the request.

CJFE is calling on the Trudeau government to support Private Member’s Bill C-303 to repeal Bill C-51 in its entirety.

Legal protections for journalists and their confidential sources

What it is: Several recent incidents highlight the need to establish press shield legislation. Last month, TheIndependent.ca reporter Justin Brake had to appear in court and may face charges stemming from his following protesters onto the Muskrat Falls hydroelectric construction site. Last year, Vice reporter Ben Makuch was ordered to turn over communication records of his interviews with Daesh fighter Farah Shirdon. Makuch and Vice Media continue to fight this production order. In Quebec, it was revealed that police were conducting court-sanctioned surveillance of journalists to try to identify their confidential sources.

What’s at stake: “The public right to know has completely fallen apart. Ben Makuch — a Canadian reporter — is facing jail time right now simply for doing his job,” says CJFE’s Henheffer. “We are one of the only industrialized countries that does not protect journalists’ sources. The government can go in and compel journalists to give their confidential sources up, and when that happens, those sources go away.”

CJFE and the CAJ have been granted intervener status in Ben Makuch’s case, which allows them to make submissions. They argue that by forcing Makuch to give up his records, the courts would make it clear that it isn’t safe in Canada to speak with the press.

“What really scares us is that the Ben Makuch situation has not gone well for us in the courts,” says CAJ president Nick Taylor-Vaisey. “We have lost cases before . . . when source protection was at stake. Any legislation that makes it easier for law enforcement or judges to get at our notes, and our sources that we are protecting . . . is just scary.”

What’s happening: At the Press Freedom Rally, Canadian Journalists for Free Expression called on Trudeau to support Bill S-231, the Journalistic Sources Protection Act, which would protect confidential sources and make it more difficult for the police to get warrants to spy on journalists.

Canada is falling behind other industrialized nations when it comes to access to information. According to the Centre for Law and Democracy, Canada ranked 59th globally for ‘Right to Information’ in 2015, down from 51st in 2012.

Compounding these frustrations, it’s a patchwork system with different agencies processing requests differently, and each province has its own rules. Entities subject to the Access to Information Act have several loopholes and procedural options at their disposal to withhold information and frustrate requesters.

Often, it’s only large media organizations that can afford the time and money to follow through with requests for information. As a result, information that’s in the public interest to expose never sees the light of day.

What the Liberals promised: Trudeau promised to amend the Access to Information Act to make government data more open, eliminate all access to information request (ATIP) fees, except the $5 filing fee, and give the Information Commissioner the “the power to issue binding orders for disclosure,” according to the Liberals’ campaign platform.

What’s actually happening: On May 5th, 2016, the government issued an interim directive through Treasury Board president Scott Brison to waive ATIP fees, but the other promises have yet to be fulfilled.

“They haven’t made [these promises] priorities,” says the CAJ’s Taylor-Vaisey, “and they keep promising a lot of things for a few months down the road.”

The day after winning a majority government, Trudeau went to the National Press Theatre to address and make nice with Canada’s media apparatus. In front of the assembled reporters, whose job it is to be critical of sitting governments, Trudeau committed to “an open and transparent government,” saying, “I think it’s important to underline the important role the media fills in public discourse and public life. And I look forward to continuing to engage with you all.”

The prime minister continues to make himself available to the media — a stark contrast to his predecessor, Stephen Harper, who met with the press infrequently and on his own terms. But making himself available to the press is the “bare minimum Justin Trudeau is expected to do,” says Taylor-Vaisey. “There are other, obviously more serious, issues like access-to-information reform, which is a press freedom issue. We expect the government, based on their own rhetoric and campaign promises to act . . . and we are still waiting on that action.”

At the end of the rally, the demonstrators arranged themselves in the shape of an eye while a volunteer climbed a batting cage to get a photograph. Their message: Trudeau, we’re watching you.

Image courtesy of the CJFE.