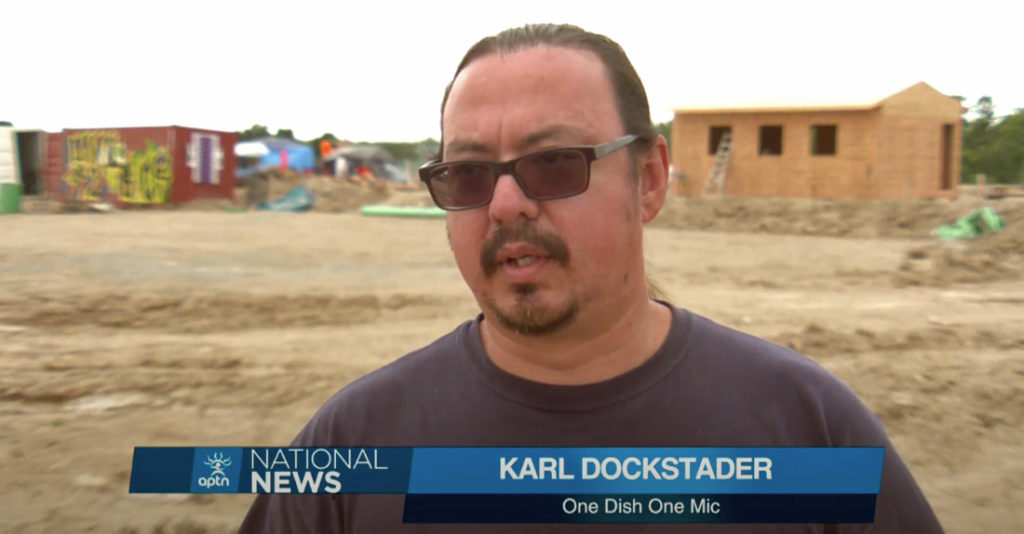 “It’s Either A Terrible Mistake Or Something More Sinister”

Karl Dockstader doesn’t know why he was arrested, either in a specific sense or a more general one.

In the specific: Dockstader says the Ontario Provincial Police (OPP) have yet to explain the basis for criminal charges laid against him on Wednesday for mischief and failing to obey a court order, other than that they are somehow connected to his presence at 1492 Land Back Lane. The Six Nations encampment and blockade in Caledonia is subject to an injunction, but he doesn’t know exactly what the police are accusing him of having done.

In the general: Dockstader — the co-host of One Dish, One Mic on Niagara’s Newstalk 610 and a contributor to CANADALAND — is a journalist. And while it’s not unheard of for journalists in Canada to be arrested in the course of reporting on protest actions, Dockstader had hoped that a recent court decision had clarified things somewhat.

Last year, in a closely watched case concerning reporter Justin Brake, the Court of Appeal for Newfoundland and Labrador affirmed a certain degree of protection for journalists who merely observe and report on (i.e., don’t actively assist in) a potentially illegal action. The judges approvingly cited an affidavit from Karyn Pugliese, then the head of news at APTN: “A court decision that does not recognize journalists as independent observers and reporters of events, but instead places them on the same footing as participants, imperils journalists’ required independence and will inhibit them from embedding with protesters during conflicts.”

Dockstader, one of this year’s CJF-CBC Indigenous Journalism fellows, had the Brake decision in mind while he was reporting from McKenzie Meadows, where land defenders have been blocking the site of a proposed housing development.

It’s less clear if the OPP did.

Asked if the force took into account Dockstader’s status as a journalist when deciding to charge him, a media relations officer for the Haldimand County detachment did not answer directly.

“The OPP is committed to the freedom of the press and respects the important role the media has in the community,” Const. Rod LeClair says in an email. “We value and strive to have collaborative relationships with our media partners.”

But, he adds, “Engaging in activities outside of their reporting purpose could subject media personnel to charges in relation to violation of a court order and other applicable offences.”

LeClair declined to outline what led to the charges in this case, as the matter is now “before the courts.”

On Friday, the Canadian Association of Journalists and Canadian Journalists for Free Expression put out a statement condemning Dockstader’s arrest “in the strongest possible terms.” On Saturday, they were joined by Bell Media, which owns Newstalk 610, and by Walter Sendzik, the mayor of St. Catharines, the largest city in Niagara Region.

We fully support the journalism of @KarlDockstader.
We deeply oppose his arrest and charges and have offered to assist him
in any way we can.

The Canadian Civil Liberties Association has pledged legal support for Dockstader as well as for Courtney Skye, a researcher at the Ryerson University-based Yellowhead Institute who was arrested after leaving the site on Thursday. Last fall, Yellowhead published a study examining the weaponization of injunctions against First Nations, compared to First Nations’ own limited success in obtaining such orders.

Canadaland spoke to Dockstader on Friday to learn about how this unfolded from his perspective. The following interview has been edited and slightly condensed.

The last live report from #1492LandBackLane by @KarlDockstader for this week. All people want here is to build a peaceful community on their land. It's been a week of stories, laughter, and songs. Why does it have to come to an end? pic.twitter.com/OTSugCKOqM

What was the last day you were at 1492 Land Back Lane?

Then the OPP contacted you on September 1st to indicate that they wanted to arrest you?

Yeah, they told me they were going to charge me, that’s right, on Tuesday, September 1st. They actually emailed me. That’s a first. Another reporter actually pointed out that they emailed my media account. So it’s not like it was a Hotmail. Like, they knowingly found my email address, perhaps when I gave it to OPP officers earlier in the week.

When you gave them your email address for reporting purposes?

Yeah. So I had encountered two officers earlier in the week, when I went to take a video of the OPP detachment that they had set up at a community centre in Haldimand. And when I did that, I was approached by two officers. They questioned me. I said I’m a member of the media. I gave them a card. They went away pretty quickly. They gave me the card of their boss. And then they just observed.

What did they specifically say in the email to you?

They didn’t say much. All they said in the email was that Det. Const. Bergeron needed to speak to me in regards to McKenzie Meadows, and she left her phone number at the OPP Haldimand Cayuga detachment.

I didn’t think much of it. I called her up just thinking, maybe it was about clarifying a detail or maybe because I was there earlier. Sometimes when I’ve made a mistake around the police, they like to have that cleared up right away. So I called her back. And she told me at that time that they intended to charge me with mischief and failure to obey the court order.

Was the “mischief” anything in particular or just your presence at the site?

They didn’t give me any details. She just said “in connection with McKenzie Meadows.” So she didn’t give me a specific date or any kind of information along those lines. So I told her, well, actually, I’m a member of the media, I’m a journalist, and I was documenting what was happening. I spent the week at McKenzie Meadows doing an immersive story, and that’s when she said, “Well, when we meet, you can give me your evidence.”

And as soon as she said “evidence,” that’s when it signalled, “Okay, the tone of this has changed.” Originally I thought, maybe I could just explain my situation to her, and I could go in and have a meeting, and she would sort of understand. But as soon as she said “evidence,” I realized that’s not what she was looking for. I contacted counsel, got some advice from colleagues in the media, and they all basically said, “Don’t go alone.”

Did they come and arrest you, or did you take yourself in?

I turned myself in. I went down to the OPP Haldimand office. My lawyer arranged it. She wasn’t actually there. So I went in and, on the advice of my lawyer, didn’t answer any questions. They didn’t really ask any questions, either.

I think once I had a lawyer, the tone sort of changed. They went from “friendly opportunity to have a discussion about my charges” to just going through the formality of arresting me. So they met me at the door. They processed me. Three officers were involved in processing. It was unusually nice. I’ve seen arrests go the way we sort of think they go, from watching Cops or whatever, and this was the opposite of that.

You think that that’s largely because you had a lawyer?

And did the the charge itself, the Information sheet or whatever they give you, explain specifically what was being alleged?

No, it’s awful. They gave me an undertaking, a Promise to Appear form, and it has almost no details on it. It simply lists the two charges of disobeying a court order and mischief. And then it just gives me the the conditions that they laid out and my next court date, which isn’t until November 24th.

And the conditions, are they mostly about keeping away from the camp? Or are there other ones?

Yeah, there’s two that are really quite problematic. Number one is not to go to 1535 McKenzie Road at all, which means I can’t cover the story, according to this.

And the other one is that I can’t contact the owners or employees of Foxgate Developments, directly or indirectly. So if they had a press conference, for example, and I wanted to go as One Dish, One Mic, then apparently I can’t do that. And even though I’d be covering that in my capacity as press, I’m technically prohibited from being in contact with their employees, which again, is a little ridiculous.

Did the Promise to Appear specify on what date or dates they allege the crimes were committed?

No, it doesn’t actually say that. And that’s a bummer. The only question I asked was when I could get my screening, so I could know how much of a penalty the Crown was going to ask for. And I asked for my disclosure, the details that the police keep on my file. And they said that they would not be able to give me my disclosure before the court date.

You were present at the camp, but you seemed to be conscious of the decision in the Justin Brake case last year, in terms of what the court in Newfoundland set out as what might distinguish a journalist from a protester. How would you characterize your presence or coverage in terms of the degree of your participation?

I 100% believed that because of the Justin Brake case, that as long as I kept my involvement to simply covering the story that I was at no risk of charges. That’s why when I clarified that I was a journalist to the police — who may have already known that at that point — that’s why I was really surprised that they proceeded with the charges.

Did they seem at all interested in or aware of the fact that you’re a journalist and/or that precedent?

It never got that far. Once they started to talk about evidence, that’s when I shut down. My experience with the police is they just want you to talk about anything, so that hypothetically they can get something to use.

Last week, APTN News misidentified you as as one of the organizers. Do you think that may have figured in this?

I don’t think it’s an element. I mean, APTN cleared it up pretty quickly.

Is there anything else you think people should know?

Not having access to my disclosure, being restricted from going to the site and from talking about it with Foxgate — I see all of those as direct tools of press suppression. And I’m not saying I’m so special that they actively said, “Let’s stop Karl.” I don’t think that I’m that known in OPP circles or anything like that.

But the idea that any reporter or any media person would be told “Don’t go to the story and don’t talk to any of the participants in the story” and that that’s perfectly legal… I mean, that’s baffling. It’s either a terrible mistake, or it’s something more sinister than that. And I actually hope it’s a mistake.

Top screencap from the August 26 edition of APTN National News.

Correction (September 29, 2020, at 5:40 p.m. EDT): This story originally said that Dockstader was charged on “Thursday.” He was in fact charged on September 2, a Wednesday.