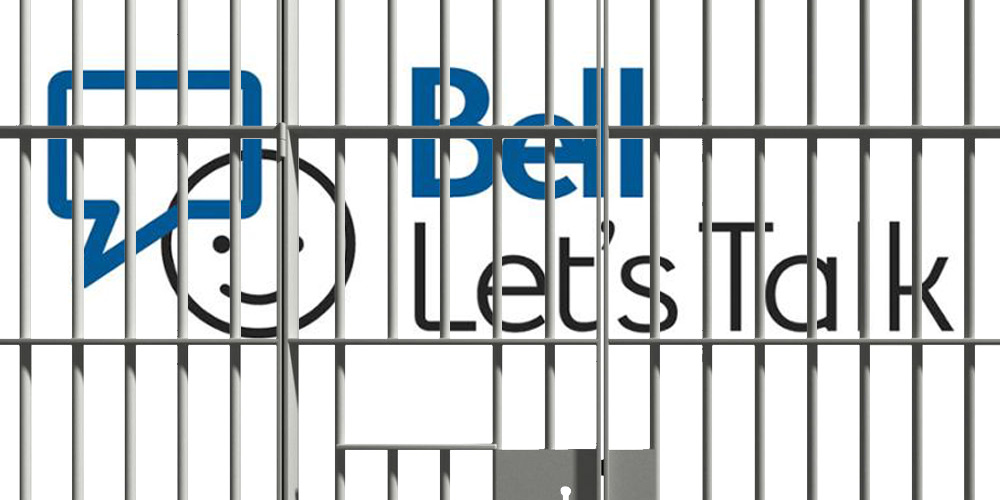 Bell holds the contract for a prison phone system described as "prohibitive, predatory, and outdated"
Article By CANADALAND
Share

This year, the Toronto Prisoners’ Rights Project (TPRJ) got ahead of the game with a viral thread calling out Bell for “destroying mental health conditions” in Ontario prisons through a phone-services contract described as exploitative of both inmates and their families:

Everyone knows that @Bell Canada’s #BellLetsTalk campaign has been raising money for mental health since 2011.

What few people know is that Bell has been destroying mental health conditions in prisons since 2013.

The thread drew from a recent report by the Criminalization and Punishment Education Project (CPEP), a group of Ottawa-based academics and activists, which advocates for the government to abandon a “prohibitive, predatory, and outdated” phone system that charges “astronomical” rates, with an undisclosed portion kicked back to the government [pdf].

That echoed a recommendation from the 2018 coroner’s inquest into the death of Cleve Geddes, who hanged himself at the Ottawa-Carleton Detention Centre after being unable to make contact with his family. The coroner’s jury said the system should be changed “to make it easier for inmates to make outgoing phone calls. Specifically, the phones available to inmates should be able to call cell phones and should not make only collect calls.”

For its part, Bell maintains that the terms of its current contract were specified by the government in 2013 and that “rates for operated assisted calls in Ontario correctional facilities are the same as Bell’s public rates.”

On Wednesday afternoon, the TPRJ and CPEP are holding protests at Bell’s offices in Toronto and Ottawa, respectively.

For this week’s episode of CANADALAND, Jesse Brown spoke to Souheil Benslimane, a co-author of CPEP’s report.

This is an edited and condensed version of that interview.

For prisoners, access to a telephone is a lifeline. And the prohibitive and outdated system that is in place, managed by Bell Canada, prohibits prisoners from talking to their families and their loved ones.

We know that a lot of people are criminalized because because of mental illnesses or mental-health conditions. And folks who find themselves in that situation are further isolated by the telephone system. We know, for example, in the case of a gentleman who passed away at the Ottawa-Carleton Detention Centre, Cleve Geddes, that he tried numerous times to ask the guard to allow him to make a phone call to his family. This person was incarcerated because he was experiencing mental-health distress. He wanted to talk to his family in order to alleviate some of that. But his requests were refused numerous times. And what happened is that he ended up dying by suicide.

We know that the isolation at jails and prisons either creates or exacerbates mental-health illnesses and conditions. And the phone system is one of those factors that has a compounding effect to that isolation.

Can you can you explain how that phone system works?

In the provincial jails, you have these telephones that look like public telephones. You have to dial a number that takes collect calls. And numbers that accept collect calls are usually landlines or pre-approved numbers. But if your family knows that you’re incarcerated and they direly want to talk to you and they have the resources, they can take up a third-party plan and pay for it on top of their cell phone plan to allow them to accept collect calls on their cell phones.

When you dial a number, you wait until the person on the other end of the line accepts the call, meaning that they’re going to have to pay for those charges. And then you’re limited to 20 minutes on each call. Families who accept the calls are billed on a monthly basis by their telephone providers. And those bills can range from a couple hundred dollars up to thousands of dollars a month, as we highlighted in our report, based on the bill that was shared with us by a mother of an incarcerated person who was at the Ottawa-Carleton Detention Centre for three months. The woman who was living in a retirement home was billed $6,000 to talk to her son for three months.

Why would Bell be the one to point a finger at in this case?

Because Bell is profiting from that. They’re making money. They’re not doing this benevolently. And it’s not the fault of Bell only, we have to make that clear. Bell is making money out of this project and they are giving kickbacks to the Ministry of the Solicitor General, which has an even a greater duty to ensure that people who are in human cages have the ability to call their families, their lawyers, and service providers.

You tell me that you were fortunate enough to have family that could take on those costs, which must have been a huge comfort to you. Did you witness people who did not have that same comfort? And did you see firsthand the impact on people’s mental health that that loss of communication had?

I saw people who lost loved ones, people who had partners on the outside but broke up because of the prohibitive and outdated telephone system. I know parents who were not able to talk to their children for months, sometimes years, while they’re at the Ottawa-Carleton Detention Centre because they cannot afford a landline.

However, I also saw a lot of beautiful moments, where people who are fortunate, who do have access to a phone, allow each other or cover the costs for each other, in order for them to alleviate some of those tensions. But the only problem with that is that it’s not a systematic way to approach the issue.

I have to imagine that for a lot of prisoners, there’s a lot of guilt and shame around the price to their kids and their families. And it seems like this system puts them in a position whereby they would be redoubling that burden by making that phone call — that if you’re feeling guilty and ashamed that you can’t provide money for your kids, well, you’re now a financial burden if you call them to hear their voices. And basically you create a financial incentive for people to be isolated.

It places the families as financial victims as well. They’re victimized by the state in ways because their resources are already stretched out and they have to go out of their way to cover for those bills, so they are therefore punished. Even if you don’t sympathize with prisoners, you have to remember that the families of people on the outside are also punished by the system. And this is unacceptable.

The only reason why I can imagine a collect-call system being in place is because the ministry gets a percentage of what Bell gets. So it does seem like an alliance to make money off of some very vulnerable people.

The prison-industrial complex is the way in which corporations are in collusion with governments in order to reap profits from the plight that incarcerated people face. I think that the ministry was not unaware that there are families who pay thousands of dollars a month to stay in contact. It’s hard, you know, not to say that it’s on purpose that this gouging has been happening.

What is your message to Bell? What do you have to say to Bell for looking good on mental health and trying to encourage people to take it seriously and give money to it and have conversations about it, while they themselves, in your view, are having such a destructive effect and profiteering on the backs of people’s mental illness?

I think that Bell Canada has to reconsider their approach. They have to sit down with their accomplice, the Ministry of the Solicitor General, and tell them that they have to make telecommunication cost-free, increase or eliminate the 20-minute mark, and allow people to call any cell phone or any landline in Canada. If they want to be real champions of mental health, they cannot discriminate: who are they going to champion the cause for?

In response to CANADALAND’s questions, Bell said in a statement: “The terms of service in our contract with the Government of Ontario were specified by the ministry in 2013. The contract expires in June, and we have submitted a new proposal in response to the current government’s request. We couldn’t comment further about this or any of our other business contracts, other than the rates for operated assisted calls in Ontario correctional facilities are the same as Bell’s public rates.”

By Taylor Lambert
Why is No One Talking About Steven Galloway?