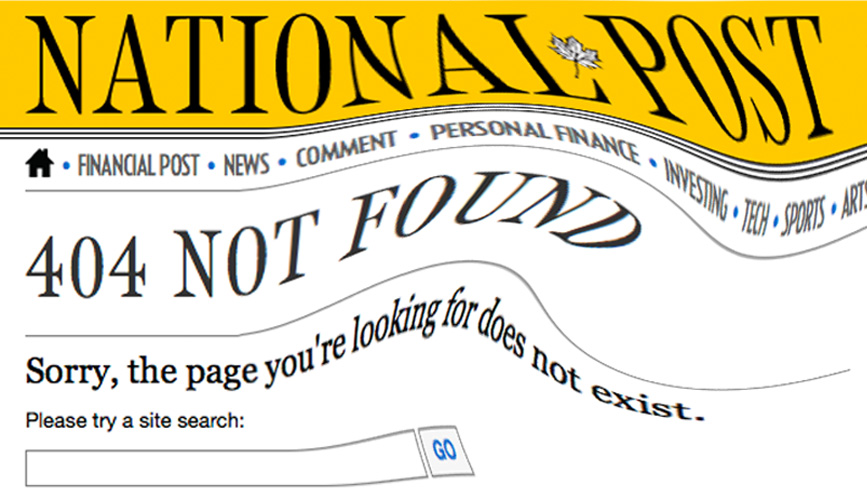 On Tuesday morning, the National Post published an op-ed on its website under the headline “Calling for The Daily Show’s Trevor Noah to pull out of Toronto event supporting Islamist intolerance.”

But by early evening, it was quietly removed without any explanation, and comment editor Kevin Libin did not respond to CANADALAND’s request to offer one. (It’s still available in Google’s cache.)

This morning, however, the Post republished a significantly revised version of the piece along with an editor’s note: “An earlier version of this article that had not been properly edited was posted May 9, 2017. The Post regrets any error that appeared in it.”

The article was penned by British anti-Islamic-extremism activist Sam Westrop on behalf of Islamist Watch, a project of American right-wing think tank the Middle East Forum. The Council on American-Islamic Relations considers the MEF to be “part of the inner core” of a U.S. “Islamophobia network.”

Both versions of Westrop’s piece call for Daily Show host Trevor Noah to withdraw from speaking at Islamic Relief Canada’s 10-year anniversary event taking place on May 20 in Toronto, because of perceived ties between Islamic Relief Worldwide (IRW) and extremists and terrorist organizations.

Westrop also argues in both versions that Noah should back out because of another speaker attending, Texas-based imam Nouman Ali Khan. In the original, Westrop wrote that “while Khan projects a moderate image, we have found evidence of him expressing repugnant views about homosexuals and abusing women.” The revised version, however, says that Khan is “a prominent American cleric who projects a moderate image, but who holds, in our view, repugnant views about homosexuals and women.”

The original was accompanied by four embedded YouTube videos, given captions such as “Khan justifying a case of physical abuse of a wife.”

Islamic Relief Canada spokesperson Reyhana Patel says they spoke with the Post on Tuesday to “outline all the inaccuracies and false information” in Westrop’s original piece. She declined to provide CANADALAND with a full list.

However, Patel explained via email that Westrop took videos out of context through “snippets of a much longer in-depth lecture … [Khan] does not believe in misogyny or any form of gender-based violence, and we would never invite him to share a platform with us if we found out otherwise.”

“These comments were dangerous to make. We are a registered charity in Canada and adhere to the Canadian Revenue Agency guidelines.”

One of the videos Westrop included with the original article shows Khan saying “it’s the scariest thing” that American guidance counsellors aren’t allowed to tell teens who think they’re gay that “there may be something wrong with that.” Another video, this one heavily edited, appears to show Khan supporting the Quran’s call for adulterers, prostitutes, and pornography actors to be “whipped 100 times.”

The original piece also tied Khan to one of South Asia’s leading Salafist preachers, Zakir Naik, because Khan had a picture on his Facebook page of the two — in Westrop’s words — “proudly meeting.” Westrop then wrote that Naik “advocates killing apostates and homosexuals,” that he has said “every Muslim should be a terrorist,” and was banned from entering Canada for his extremism. The new version removes any mention of Naik.

The new version also walks back the original’s claim of IRW being “financially linked” to terrorism. Instead, the piece cites two countries that banned Islamic Relief branches in 2014 due to such allegations. It adds in parentheses, however, that “that same year, IRW reported that an audit of the charity found no evidence to support these allegations, and launched a court action against the Israeli government to overturn the ban.”

Islamic Relief Canada’s Patel did not respond to a question about whether her organization raised the possibility of legal recourse in its correspondence with the Post.

This is not the first time a Canadian newspaper has pulled a piece drawing connections between Canada and Islamic extremism. As CANADALAND reported late last year, Postmedia removed a piece from its Sun websites following a lawsuit from a man who the article alleged had ties to the Muslim Brotherhood.

CANADALAND also reached out to Westrop, as well as Noah’s and Khan’s media relations people. None responded as of publishing. We will update if this changes.

The author of this story has had one column published by Libin and the Post but has only corresponded with him via email.