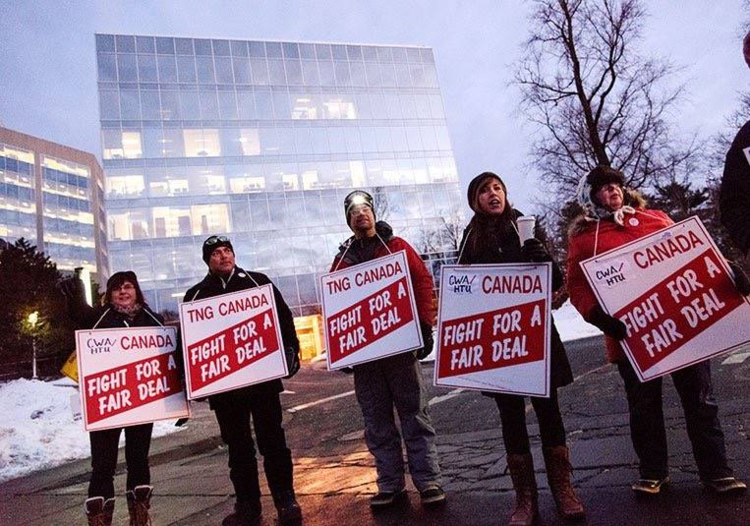 No End In Sight For Chronicle Herald Strike

For the last three months, 61 journalists at Nova Scotia’s self-described paper of record have been on strike. This is taking place at a time when print media in Canada is in deep, deep trouble.
By Robert Hiltz
Share

For the last three months, 61 journalists at Nova Scotia’s self-described paper of record have been on strike.

This is taking place at a time when print media in Canada is in deep, deep trouble. The industry is fighting a battle on multiple fronts as ad revenues evaporate, subscribers die off, and digital upstarts eat into what a decade ago was their exclusive territory. It’s a battle most papers are losing.

Jobs in the industry are precarious as employers try to cut as many people and assets as they can to try and keep from being dragged into the red. Few places have it easy, but perhaps none have it quite as tough as the Herald. It’s hard to say how dire the situation is for sure, but the company’s actions do not signal they are dealing with a healthy bottom line. Because the paper is privately held, it’s books aren’t made public.

The paper’s readership has been steadily declining. The average number of people reading the Chronicle Herald in print or online was 91,490 in 2014, according to the most recent study by industry group Newspapers Canada. This is down from 96,230* the previous year, and 109,210 in 2012.

Meanwhile, the Herald has been beset with a labour strife, leaving morale in the newsroom particularly low as the company looked to slash costs. Several striking workers described a once vibrant environment that turned noxious.

“It has not been a pleasant work environment,” according to long-time Herald reporter Mary Ellen MacIntyre.

She arrived in the paper’s Halifax newsroom in 2014, after more than two decades working at different bureaus around the province. “It just became a very sad place. A place where a lot of the creativity you would expect in a newsroom was kind of stomped down.”

It had taken time for things to turn sour, and the seeds had been planted long ago.

The Herald’s legislative reporter Michael Gorman said there was lingering bad blood dating at least as far back as 2009 layoffs. And then there was a round of buyouts a year and a half ago. “They weren’t necessarily laid off, but it was made pretty clear that things were going to be precarious for you if you stick (around),” he said. After that, a year ago, the company locked out staff at the paper’s printing press for several weeks before extracting major concessions from the workers.

In the current dispute, the company wants to change how the seniority system works and allow for the contracting out of design and production services of the paper. The Herald also wants to make changes to the pension plan. Union local vice-president Frank Campbell said these are issues he and his members see as undercutting their job security.

The Halifax Typographical Union, which represents Herald journalists, has offered concessions. But the company has said previously what they’re offering won’t be enough.

In any case, the two sides haven’t formally spoken in weeks. Campbell said they are in contact, but no bargaining is happening, making a settlement out of the question for the foreseeable future.

And so, the journalists keep walking the line.

While they’re outside carrying signs, inside the company is trying to carry on as best it can with dozens of employees off the job. Replacement workers — scabs, as they’re often called — have been brought in to write stories.

But on the Herald’s website, bylines are conspicuously absent. Just weeks before the strike began, the paper circulated a memo to the union saying the names of reporters would be removed from all stories “indefinitely,” according to a National Post report. Since then, no news report has included the name of the Herald reporter — replacement or otherwise — in the newspaper.

The union has outed some of the journalists working for the paper during the job action in the hopes of discouraging others from crossing the picket lines. But, some of those replacement workers previously told CANADALAND, they had little choice but take the jobs. Some of them are just out of journalism school and didn’t see any other option.

The issue of replacements came to the fore two weeks ago, when the Herald published a story on schoolyard violence anonymous mothers blamed on refugee children. The online backlash was swift. The paper first tried heavily editing the story before deciding to pull it entirely. The Herald then published a lengthy apology to readers, saying the story wasn’t up to the paper’s standards and promising to do better.

That the story wasn’t ready for publishing was obvious to many of the strikers, and the union jumped quickly on the issue as an example of how valuable they were to the paper. If they had been on the job, they say, the story wouldn’t have been published at all.

“Things like that happen and the paper loses credibility and relevance,” Campbell said. And it’s not something he sees as easy to come back from.

The union runs its own website, Local Xpress, where striking Herald journalists are still putting stories out regularly. “It’s a way for our people to keep the voice and do what they’ve always done very well,” Campbell said. It’s an outlet for their skills while they’re on strike, keeping their presence felt in the community.

Despite the general sense of optimism and solidarity, Campbell said there are some people who have left the picket lines, but not due to financial trouble. Many of them simply don’t want to work at the Chronicle Herald any more. “Because of the mood and the atmosphere that existed there before we went out, and the deteriorated mood that’s expected if we ever go back, they’ve decided to look elsewhere,” Campbell said.

Gorman was one who decided he was done working for the Herald. He said he loved his job reporting in the legislature for the paper, but he got an offer he couldn’t turn down. “The combination of being presented with an offer, the sense that things aren’t going to get resolved in the short-term, and concerns about whether or not we’ll just find ourselves in the position again in the not-too-distant future made it seem like it was the right time to go.” (Gorman couldn’t say what job he was leaving for as he said hadn’t been formalized, but he had given his notice that he would be leaving.)

But those not lured away by more secure jobs elsewhere aren’t wallowing in despair.

“Why would we despair? We would despair if we didn’t have a union. But, there is no despair,” MacIntyre said. Their strike pay is generous enough that she said she hasn’t felt the financial pressure that often accompanies a strike.

“You worry, to some extent, about the future,” MacIntyre said. “But, despair doesn’t enter into it — maybe speak to me this time next year.”

The Chronicle Herald did not respond to requests to comment for this story. If they do, the story will be updated.

Disclosure: One of the striking Herald copy editors is my cousin. She and I have never met, but her parents came to my grandfather’s funeral service several years ago. They were very nice. We shared some sandwiches. In any event, I didn’t speak to my cousin for this story, in an attempt to avoid any apparent conflict.

*This number is actually reported as 82,483 in the Newspapers Canada report for 2013. The discrepancy is in how they divide the total weekly readership. In the 2013 report, they divide 577,382 by seven, which spits out 82,483. But, the Herald doesn’t publish on Sundays. So, the average daily readers should be divided by six, which gives 96,230. I say “should,” because this is the method they used in the more recent 2014 report. To get 91,490 daily readers, they divided the weekly number, 548,938, by six. I used this formulation to keep the numbers broadly comparable. (None of this applies to the 2012 report, when the Herald still printed seven days a week.)