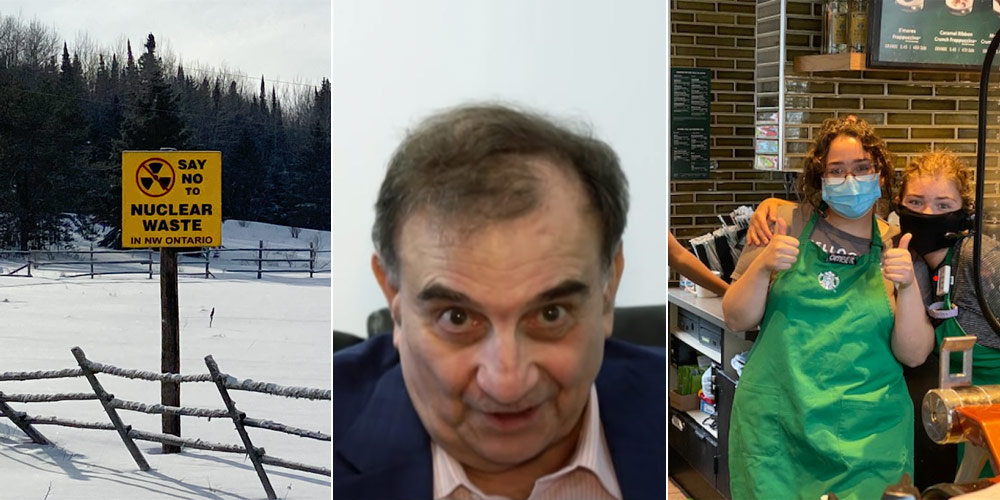 When crafting a story for CANADALAND’s Monday show, we always aim for a neat beginning, middle, and end.

The news itself, though, doesn’t always cooperate — real life has a habit of marching ever forward, indifferent to the niceties of narrative structure. As such, we occasionally revisit stories we’ve brought you in the past, offering updates on what’s happened since.

On this week’s CANADALAND, we return to two towns in Ontario that could become home to all of Canada’s high-grade nuclear waste, catch up with “the warlords’ favourite lobbyist,” and share the half-forgotten history of the real first unionized Starbucks in Canada:

• Sarah Lawrynuik follows up on “The Plan To Turn My Hometown Into A Nuclear Waste Dump” (originally aired January 24, 2022), in which she travelled to Ignace, near where she grew up in Northwestern Ontario, to learn about the divided reaction to a plan to stuff all of Canada’s high-level nuclear waste into a new kind of subterranean dump. But Ignace isn’t the only possible site; the Municipality of South Bruce, 75 km northwest of Kitchener, is also in contention. In her update, Sarah looks at how resistance in both areas is beginning to gain critical mass, and may come to a head in the municipal elections to be held in October. The organization in charge of the project has already deferred the date for a decision by a year, after the Nishnawbe Aski Nation, a collective of 49 First Nations from across Northern Ontario, passed a resolution against it.

• Jonathan Goldsbie follows up on “Interview With A Real-Life Bond Villain” (originally aired March 14, 2021), which featured an interview with Ari Ben-Menashe, an elderly Montreal lobbyist who’d just signed a $2 million USD contract to represent the generals who’d seized control of Myanmar in a bloody coup earlier that year. But the arrangement turned out to be short-lived. In his update, Jonathan explains how sanctions brought an abrupt end to the deal but not before Ben-Menashe arranged a controversial trip for CNN. And also how Ben-Menashe, who keeps busy, later returned to working for the military regime in Sudan, prompting pro-democracy protesters to pay visits to the Lobbying Commissioner’s office in Ottawa and his own office address in Montreal.

• Cherise Seucharan follows up on “The Baristas Vs. Starbucks” (originally aired June 13, 2022), which told the story of Canada’s first and only unionized Starbucks, on Douglas Street in Victoria. But we actually screwed that up. While it may have been the country’s only unionized Starbucks, it wasn’t actually the first. In her update, Cherise speaks to former MP and Canadian Auto Workers organizer Peggy Nash about the wave of unionization that hit Starbucks stores in Vancouver shortly after the chain first arrived in Canada in the mid-90s — and how the company ultimately beat it back, using tactics similar to those they’re deploying now.

Top image includes Sarah Lawrynuik’s photo of an anti-nuke sign in Northwestern Ontario, a screencap of Ari Ben-Menashe from a (no-longer-available) video on a YouTube channel whose name translated as “Tunisia National Youth Movement,” and a pic of employees at the unionized Starbucks in Victoria, courtesy of the United Steelworkers.