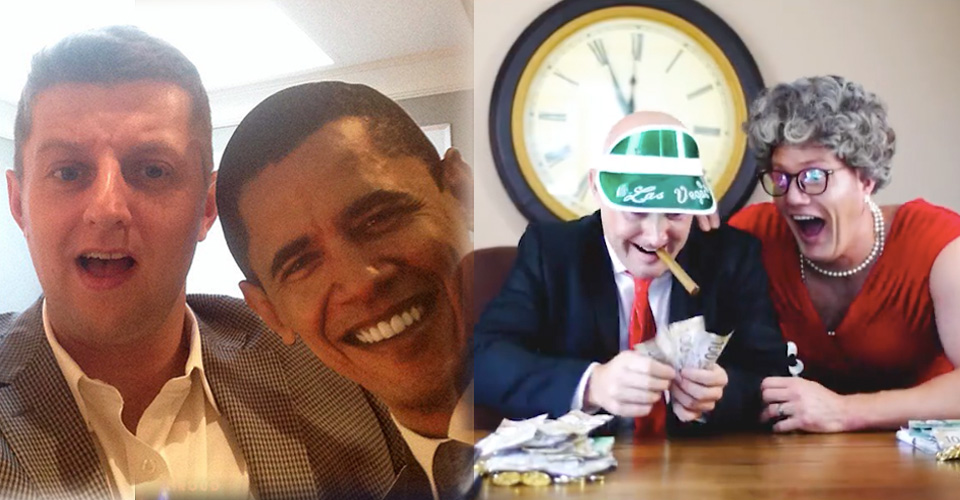 The King Of Canadian Conservative Shitposting

Published Wednesday, the musical attack video — with the designed-to-go-viral refrain “Where’d my money go? It went to Hydro!” — was just the latest elevation of anti-Liberal shitposting from Ontario Proud, a registered non-profit whose primary activity is cranking out low-quality, highly shareable anti-Wynne memes on Facebook. The video also shows the Kathleen Wynne character stealing a wallet from, tying up, and gagging a “Joe Schmoe,” as well as basking in bundles of cash, smoking cigars, and drinking champagne alongside another actor portraying the Hydro One CEO as a villainous crook.

? Everyone in Ontario needs to see this! ?We've teamed up with The Wack MC'S to produce a parody music video about paying hydro bills.Spread the word if you're sick of getting ripped off on hydro!

An official third-party advertiser in the upcoming provincial election, Ontario Proud knows how to weaponize social media platforms in the same way that has proven effective for the successful populist movements of Brexit and Trump. Its Facebook page now boasts over 289,000 likes, which — if the vast majority are indeed Ontarians, as founder Jeff Ballingall asserts — would translate to one in every 47 Ontario residents following the page. That’s more likes than the respective pages of Premier Wynne, the Ontario Liberal Party, Progressive Conservative Leader Patrick Brown, the Ontario PC Party, NDP leader Andrea Horwath, and the Ontario NDP — combined. The Ontario Proud page also gets more Facebook engagement than the the Toronto Star and Globe and Mail pages together, something Ballingall is fond of gloating about.

Another great week for Ontario Proud on Facebook! #onpoli pic.twitter.com/LaY2ogEGPr

Ballingall explains that he’s trying to reach people who are only “moderately interested” in politics.

“How do I reach the woman who works at the Honda dealership in Oshawa? You reach her through Facebook, not through Twitter,” he says in a sit-down interview.

The rapid growth of Ontario Proud

Thirty-two-year-old Ballingall has gained a lot of experience in the art of political messaging and communications over the past decade. Up until the middle of last year, he worked as a consultant for Navigator, the public strategies and communications firm known for behind-the-scenes crisis management work for high-profile clients including Michael Bryant and Jian Ghomeshi (the latter of whom they ultimately dropped). Before that, he worked as a political aide for the Harper government and Toronto city councillor John Parker, and for the now-defunct Sun News Network.

It was at Sun News that Ballingall says he learned about Facebook’s “power to reach the general public.” Ballingall ran the digital side of Sun News up until December of 2013, boasting that he “tripled their web traffic.” Canadian comedian and commentator Dan Speerin would later criticize Sun News’ Facebook likes as mostly fake clicks bought from India, but Ballingall says “there was huge confusion with Sun News in India, so I know that was a challenge after I left.” India has its own Sun News brand, which apparently led many Indians to mistakenly like the Canadian Sun News page. “I built it up, and then they ran with it when I left.”

(Ballingall says Facebook has completely changed since then and “you have to constantly adapt to beat its algorithm.”)

Despite his conservative bona fides, Ballingall claims that Ontario Proud “is nonpartisan and is promoting strategic voting.” He says he’ll vote for the NDP candidate in his own riding, because the NDP has the best chance of beating the Liberals there.

Ballingall says he created Ontario Proud back in February 2016 “just for fun,” after he saw a close friend had success with an Alberta Proud Facebook page. He says his page organically earned 100,000 likes in the first year. Then from April until November of this year, he says the organization spent close to $200,000 in advertising — primarily on Facebook — to promote further growth. He estimates that it now takes up 60 per cent of his time, the rest spent managing BC Proud and doing social media consulting.

Ballingall bought the rights to the rap video from a group of comedians calling themselves The Wack MC’s, based out of London, Ontario, who produced it and then sought out Ontario Proud in the hope of selling it to them. It was viewed 99,000 times and reached 218,000 people in the first 30 hours it had been up, but some of Ontario Proud’s previous posts have performed much stronger, with hundreds of thousands, over a million, or, in a few cases, several million views on the social media juggernaut. Beyond attacking Wynne, Ontario Proud also routinely goes after Prime Minister Justin Trudeau, interspersing the attacks with the odd upbeat video appealing to Canadian national pride.

CANADALAND reached out to BuzzFeed News media editor Craig Silverman — who’s been at the forefront of covering the spread of fake and hyper-partisan news and disinformation on Facebook since the tail end of the US election — to analyze Ontario Proud’s rapid rise over the last year and a half.

“It is possible and very easy to buy fake fans for a page, or fake members for a group. But if you do that, then you will not see engagement on your page that matches your number of fans. But [Ontario Proud] does seem to be getting engagement, and it ebbs and flows as if it’s real,” he says in an email, upon examining the page via CrowdTangle.

“It’s certainly possible that this page has grown thanks in part to running ads on Facebook to attract new fans. These result in real likes from real people, though fans who come via ads do tend to be less engaged than ones you acquire organically. This is a common strategy, and many page owners in fact will say that it’s increasingly hard to grow a page from scratch without paying for ads.”

A new form of third-party political campaigning in Canada

Back on Monday of this week, Ballingall showed up at Wynne’s public town hall meeting at Toronto’s Concert Hall and sat in the front row. When questions were opened up to the floor, Ballingall made sure he got to spar with Wynne over how Hydro One CEO Mayo Schmidt got nearly $4.5 million in compensation last year.

Accompanying Ballingall was another Ontario Proud employee, filming footage of several disgruntled Ontarians questioning Wynne to be used for their page, and the Ontario Director of the Canadian Taxpayers Federation, Christine Van Geyn, who has been featured on camera in over a dozen Ontario Proud videos.

“I’m just friends with Christine Van Geyn. We have like-minded interests and mutual friends. But no, [the Canadian Taxpayers Federation] is not involved [with Ontario Proud] whatsoever,” says Ballingall.

It wasn’t the first time Ontario Proud has gone outside of Facebook to aggressively attack the premier. Earlier this year, they showed up at other public events Wynne attended and also paid for an airplane to fly over downtown Toronto during a marathon with a banner reading “ANYONEBUTWYNNE.COM.”

Ontario’s Liberal government put new restrictions on third-party advertising late last year in a bill reforming campaign finance laws. Unions took full advantage of the old rules, which allowed unlimited spending, and were responsible for 94 per cent of all third-party advertising in the last three elections, including the lion’s share of the almost $9 million spent in the 2014 election, largely aimed at the PCs. Under the new rules, however, third-party campaign groups can spend only $100,000 on advertising during an election period and a maximum of $600,000 on advertising in the six months beforehand.

Ballingall registered Ontario Proud as a third-party advertiser on the opening day of registration, November 9, ahead of the Ontario election coming on or before June 7, 2018. The name on the registration belongs to personal-injury lawyer Ryan O’Connor, who sits on the organization’s board alongside Ballingall and Chris Spoke, another Sun News alum, who works in tech.

Pressed on who funds Ontario Proud, Ballingall says, “No massive donors. It’s not like one group or another. Small businesses, a lot of people giving $100 or $200, $300, that kind of thing.”

Despite the tightening of the rules, third-party advertisers aren’t required to disclose donor contributions until after an election is over. The new campaign finance rules also don’t cap third-party spending on staff, polling, and door-to-door campaigning.

Ballingall says they intend to spend the maximum advertising amounts if they can raise that much.

Similar to Rebel Media, Ontario Proud has amassed a large email and postal code database of 88,000 supporters by asking viewers of their video content to sign petitions and take a pledge to vote out Wynne next year. The petitions and pledge require an individual to provide their email address and postal code. Also like The Rebel, Ontario Proud uses the popular campaign software NationBuilder to compile this information.

Ballingall also brags that the most recent videos on the Ontario Proud page are getting tens of thousands or over a hundred thousand views without any advertising spending.

“Facebook is incredibly important for getting around the media filter, to get around the political filter and speak to voters directly — and it’s so cheap to do so.”

The difficult act of gently stoking the anger of Ontarians

Back in June, Wynne’s office told CBC Toronto, “We’re not going to comment on a website that supports profane, hateful, and abusive comments.”

The spokesperson was referring to comments on Ontario Proud’s Facebook page at the time, documented by CBC’s Mike Crawley, which included: “That ugly nasty greedy no good money grubbing snot faced witch”; “The ugliest human dyke who ever existed”; and “I’m surprised that no one has shot her but maybe the bullets cost to much.”

Ballingall says that they’ve since curbed the use of slurs and derogatory comments by implementing a community guidelines policy, which “encourages respectful discussion. Personal attacks, racism, misogyny, homophobia, other forms of discrimination and harassment will be deleted without warning.” Ontario Proud also now filters out comments that contain any of the words on a list of over 900 banned terms.

In spite of this, Ballingall admits that obscene and inappropriate comments do get through the filter and that his team can’t monitor thousands of comments every day.

Wynne spokeswoman Jennifer Beaudry declined to comment on the “It Went to Hydro” rap video but referred CANADALAND to comments the premier made “about similar content in the past.”

“It’s not that I am worried about myself or being thin-skinned,” she told reporters in January about the river of hateful comments she gets on Twitter and Facebook, “but I do believe that the kinds of things we’re seeing on social media, as I say, undermine community, undermine civil debate, and you know, even more worrisome than that is that I think it discourages people from even entering politics.”

MUST WATCH: Kathleen Wynne held a Facebook Live town hall yesterday. It was an utter disaster for the premier.Like what Ontario Proud is doing? Join us: www.ontarioproud.ca/join

Ballingall describes his focus on attacking Wynne almost as a vendetta over how he believes the premier has hurt the province.

“Honestly, what is going on in Ontario is insane. I don’t like to see [that] in 2015, 59,000 families had their hydro disconnected… I grew up in Sarnia, and the last stat I saw they lost 20 per cent of their jobs in the last decade,” says Ballingall. “My wife’s family is paying egregious hydro bills. It’s personal to me.”

Premier Wynne intends to have more town hall events across Ontario, and Ontario Proud intends to encourage its supporters to attend. Whether or not all of their supporters will keep to civil discourse in non-virtual reality remains to be seen. 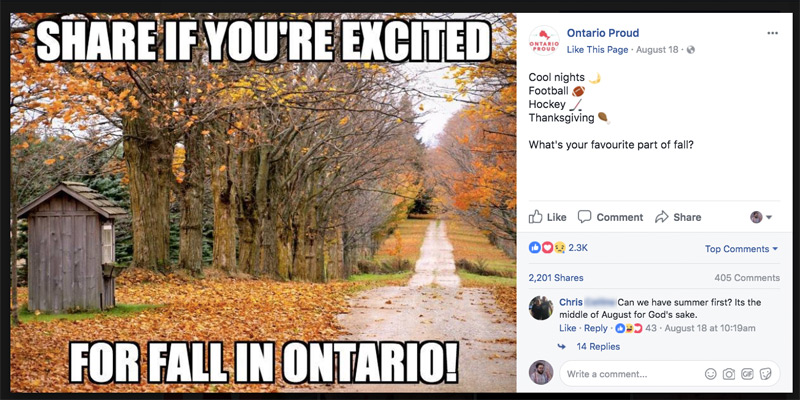 Top photo of Jeff Ballingall with a cardboard cutout of Obama courtesy of Ballingall.