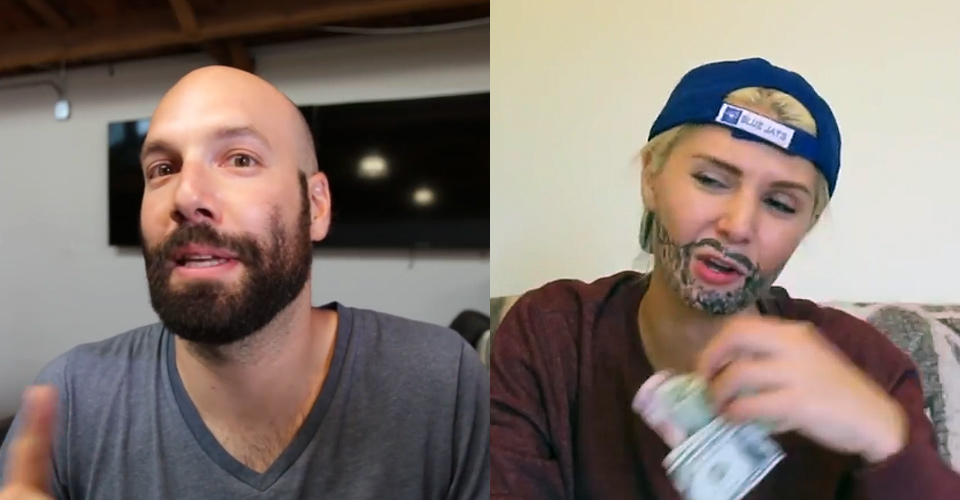 He says she'll be able to appeal, once they establish a process for doing so.
Article By Graeme Gordon
Share

When CANADALAND first reported on crowdfunding platform Patreon banning alt-right vlogger Lauren Southern for engaging in actions “likely to cause loss of life,” the company declined to elaborate on what those were. “We try to avoid commenting on specific creator situations,” a spokesperson told us last week.

Since Friday, however, the company’s approach has changed.

“The very specific action was pulling up boats in front of one of the NGO’s boats, so literally just blocking one of these boats from being able to move. That was the action,” Patreon co-founder and CEO Jack Conte explained in an interview with CANADALAND on Monday.

Southern, a Canadian and former Rebel Media personality, has recently been embedded with Defend Europe and other far-right “Identitarian” groups attempting to stop the flow of migrants and refugees into Europe by intercepting rescue ships in the Mediterranean. She has claimed to be merely covering the groups’ activities, not participating in them, but evidence has suggested otherwise.

On Friday, Conte — who is also half of the band Pomplamoose — released a YouTube video to explain the reasoning behind the ban and to address concerns from others who rely on the platform for their income. Patreon is used by independent media creators, including CANADALAND, to build up financial-support bases from “patrons” who pledge recurring payments.

In his video, Conte showed several clips recorded by Southern during a mission she took part in a couple of months ago, where she was aboard a small craft directing the skipper to move in front of a large NGO vessel that had recently unloaded refugees and migrants in Italy, because doing so would legally compel the vessel to stop.

In one clip, Southern said, “So this is the boat Aquarius, that has been illegally bringing in migrants from the Libyan ocean for the last while, and they just headed out to bring in more illegal migrants, and we are going to stop them.”

“Our conclusion,” Conte explained in his video, “was that their actions, if they continued to do what they were doing, were likely to inhibit rescue operations and potentially lead to people dying in the oceans,” which he said was a violation of Patreon’s content policy.

In his video, which has garnered over 5,000 thumbs down on YouTube (more than twice the thumbs up), he also shed light on the subsequent ban of pro-anarchist outlet It’s Going Down, which Conte said had doxxed individuals (posted their personal information online) and “published articles that demonstrated and encouraged pouring concrete over railroad tracks.”

Southern and others had pointed to It’s Going Down’s Patreon account as proof of a double standard.

Conte said that claim is false.

“In Lauren’s particular case, you know, I don’t really know when the reports started coming in, but I think at some point, weeks ago, people started filing reports, which is why we started looking at them and prioritizing them,” he said over the phone from Los Angeles.

“I looked into that personally, and [It’s Going Down’s] page was already in our queue of pages that needed to be evaluated before we actually took down Lauren. So, one thing Patreon is not going to do is batch politically opposing pages together and take them down just to act like we’re being fair, that’s just not how we operate. We operate with a queue, and we take things down in the order of urgency. … That’s just not true that this was a cover-your-ass kind of move.”

Evidently not assuaged by Conte’s video explanation, Southern caustically responded on Sunday with her own video called “Exclusive Footage of Jack Conte Board Meeting,” in which she mocked his reasoning by way of a sketch in which she appeared as Conte and several of his colleagues.

In that video, she claimed Patreon caved “to the lobbying of extreme left-wing organization HOPE not hate,” showing a screen capture of the CANADALAND story in which the British anti-extremism charity took credit for getting her and other Defend Europe figures removed.

But Conte tells us, “I didn’t even know there was pressure from that organization about that page. It literally was not something on my radar until I read a tweet about it yesterday.

Sarcastically assuming the persona of a Patreon staffer, she said, “We completely misrepresent the Defend Europe mission and ignore anything in their policy that says they’re going to save people and bring them to the closest port instead of European ones. And then we say they are going to kill a bunch of Syrian babies.”

Southern then goes on to cite articles showing that people, including the head of the EU border agency, believe that NGO boats incentivize human trafficking.

Conte responded with an extended analogy about threats to burn down a DMV but summed up his point: “So in Lauren’s case, you know, she said over and over again, ‘We’re going to stop the boats.’ They laid out a plan to buy bigger boats, to continue buying boats, and then she filmed this livestream where she successfully stops a boat. And we looked at all of this, and we said, ‘Is this a credible threat that she could actually stop more of these boats in the middle of a rescue operation?’ And we said, ‘Yes, this is a credible threat.’ And so we made the determination that it actually was credible and it could actually lead to loss of life.”

Southern was incensed when Patreon suddenly terminated her account without warning or an opportunity to appeal, “eviscerating the majority” of her income.

In Conte’s video response, he acknowledged the seriousness of taking away someone’s livelihood and made several commitments to improve the process and communication of future decisions, including the ability to appeal.

Asked if the coming appeals process would be available to Southern and others already banned, Conte said it would be.

“Will we have an appeals process in the future? Yes. Will Lauren be able to appeal then? Of course. In the meantime, look, I think people need to be talking right now. So I’m not going to tell someone I’m not going to talk with them.”

It appears Southern is open to talking.

Cool let's chat @jackconte – you won't do it publicly though I suppose? #RubinReport

However, whether or not the two can bury the hatchet remains to be seen. Since being banned, Southern bought the website patreonsucks.com to start recovering her lost subscriber base and has been blasting the crowdfunding site ever since.

"Patreon would never ban someone for their views on immigration"

Give me a break. https://t.co/QxXFOcoH0O

Just before speaking with CANADALAND, Conte appeared on The Rubin Report to answer questions about the controversy and Patreon’s new commitments to its creators. The YouTube talk show, itself funded through Patreon, has often played host to far-right figures, including Southern, who defended white nationalist Richard Spencer in her March appearance.

Top screencaps of Conte and Southern-as-Conte (the latter expressing a fondness for “shekels”) from their respective videos.