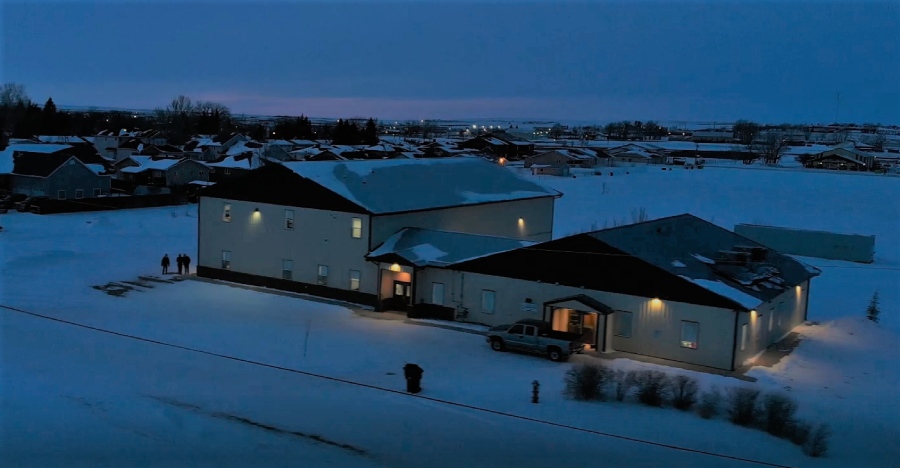 A reclusive religious sect, which has faced controversy abroad, is now being investigated by RCMP for allegations of historical sexual abuse in Saskatchewan. Several Canadian former members of the church have come forward about the church’s “cult-like” rules, even alleging the church has surveilled them after they left.

A spokesperson for the Plymouth Brethren Christian Church, Merrick Grimshaw, denied any knowledge of the alleged sexual abuse or of the ongoing police investigation.

“Sexual abuse is a crime which is in no way tolerated by the church,” Grimshaw wrote.  “If anyone has allegations of this nature they should report them to the Police. To our knowledge, no member of the church has been contacted by any law enforcement authority concerning these matters.  The church encourages members to cooperate with law enforcement in all matters”

Canadaland has spoken to former members of the Plymouth Brethren Christian Church who described a restrictive upbringing and separation from the outside world. One former member, Cheryl Hope, filed a police report alleging years of sexual abuse during her childhood in the Maple Creek Brethren community. In an interview with Canadaland, she characterized the years of alleged abuse as human trafficking.

Who are the Brethren?

The PBCC traces its roots back to the 1800s in the town of Plymouth, UK, and now has about  50,000 followers globally. They are an Evangelical Christian sect with communities in Canada, Australia, England, and New Zealand.

Their “doctrine of separation” is based on an interpretation of the Bible where believers must separate from non-believers. Bible passages referring to the separation of darkness and light, and good and evil, are interpreted as evidence of this commandment.

“We make a commitment to eat and drink only with those with whom we would celebrate the Lord’s Supper – that is the basis of our fellowship,” their website says.

According to the PBCC spokesperson Merrick Grimshaw, the Plymouth Brethren are not a cult. Grimshaw confirmed that, as with other religions, Brethren members can only marry other Brethren members. Grimshaw said that members do not vote or make political donations, but they do use mobile phones, play sports and dance.  Grimshaw said that Brethren have no formal hierarchy, no centralized control, and no paid clergy – in fact, it has no employees at all.

Your story does not have to be like mine to come forward. There is NO story insignificant to any of this. Please find strength in knowing this is unfolding. This hurts. There’s many tears! But I truly believe if we hold hands doing this- we change our history!#MeTooPBCC

Many ex-members have described being part of the Plymouth Brethren as being in a restrictive society, and living by traditional ways of life separated from the secular world. Former members say that they had to live in Brethren-only communities, socialize with and marry only other Brethren members, and work only for Brethren-owned businesses.

One ex-member who has been particularly outspoken is Richard Marsh, who was born into the church community in the UK and left at the age of 46. Marsh, who now lives in Canada, told Canadaland that while he was growing up he was restricted from participating in normal life, even while living and going to school with non-believers..

He also said that members are not allowed to attend university, and must live in a “separate” home – that is, a standalone house that shares no walls with other houses.

Marsh was married at 21, and subsequently had five children. He met his now ex-wife through the church and, due to community pressure to marry young, proposed quickly – he said they had only “spoken for about 5 minutes”  before getting engaged.

Former member Cheryl Hope, who grew up in the PBCC community in Maple Creek, Sask, describes a traditional upbringing in a reclusive community, only socializing with other Brethren.

According to former brethren and experts on PBCC history, the church has changed over time with each new person who assumed leadership. A focus on business and centralization came about, experts say, in the last few decades when the Hales family took over leadership, first with John Hales and now with his son Bruce Hales.

The PBCC also denies that they have a formal hierarchy, however their website lists Bruce Hales as the Church’s  “most senior leader”.

According to media reports and investigations into the Brethren, Hales is a multimillionaire who is known by other titles within the Church, including “supreme leader,” “Man of God,” and “elect vessel.”

In the early 1990s, the Brethren established their own private school system, called OneSchool, which now has schools around the world, including in Canada.  According to a Youtube video on the PBCC’s channel, OneSchool is “one of the largest schooling systems in the world,” which is “financed by the Brethren through contributions and fundraising” and schools are “registered and accredited by the relevant educational authorities.”

Ex-members also say that Brethren are encouraged to do their shopping at Brethren-owned grocery stores – specifically, a supermarket chain called Campus&Co, which has over 200 stores globally.

Another former member who left the church at 18, Lane Admiraal, said on the podcast Get a Life: Ex Cult Conversations that the PBCC also has centralized apps, such as one called “Community Trade-Link, their version of Kijiji  for members to buy and sell things,” and an “attempt at Spotify called Trove, where it’s only PBCC music allowed.”

The Brethren Church denies that its members are under any obligation to use those services, and they deny that the Church or Bruce Hales profits from them.

In March 2022, five former members of the church were featured in a documentary called Breaking Brethren, detailing allegations of psychological harm, abuse, and even surveillance from the church.

Many former members of the Plymouth Brethren talk about practices called “shutting up” and “withdrawing from,” in which members are shunned to different degrees, the last of which is being completely excommunicated from the church. According to former members, it is common for Brethren to be instructed to shun members of their own family, even while continuing to live together in the same home.

Former members say that can happen for many reasons, often if a member is seen as defying church rules. However, some also say someone can be shunned after something bad happens to them, for example if they are a victim of an accident, which can be taken as a sign that God is punishing them for their sins.

“Once you are shunned, you are as dead,” says Marci McDonald, a journalist and author of The The Armageddon Factor, The Rise of Christian Nationalism in Canada. She cited cases of suicides from those who have been shunned.  In 2015, the Sydney Morning Herald reported that Bruce Hales has suggested in a meeting that a member in contact with former members should commit suicide.

The Brethren Church denies shunning occurs in their communities. They say it’s up to individual families to decide if they want to communicate with members who have left, and that the Church itself would never stand in the way. They did not directly answer questions about whether members are ever instructed to shun members who still live within the community.

Marsh says that while living in a Brethren community in Regina, Saskatchewan, he experienced being “shut up.” He says he had blacked out while driving, and ended up in a car crash in which another driver passed away. He says he was seen by the community as having deserved this punishment. Marsh became depressed, and he sought help from the church –  but instead he says he was shunned.

“The way the brethren mentality or religion works is that they read into everything that happens. And if something bad happens to you, then God is disciplining you.”

Allegations of surveillance and harassment of former members

Several members allege that after leaving the church, they were spied on by the church.

In 2021 Radio New Zealand published a report about the Exclusive Brethren hiring private investigators to spy on former members, saying that the church had detailed files on 20 other ex-members.

Former member Dennis Wragg, said in the Breaking Brethren documentary that he fears being surveilled, because he was asked to do surveillance on others while in the church.

Marsh also alleges that after he left the church and moved back to Canada, he was also surveilled and tracked by the PBCC.

Allegations of abuse of minors and RCMP Investigation

One of the other reasons why people have left the Plymouth Brethren is because of alleged abuse.

Carmen Drever moved to Maple Creek, Saskcathewan at 18, after marrying a man from that community. Coming from a PBCC community in North Dakota, she said she found the Maple Creek community particularly restrictive. She says she became aware that children and young adults were leaving the community. She says she saw how some children would become the target of church leaders, and would be punished repeatedly, until the leadership would decide to “shut them up.”

“They would shut the kids up, take all the rest of the family out of the house, and the kids would be at home with the parents and they couldn’t eat with each other and they couldn’t talk to each other,” she said. Drever says that the “shutting up” period would last weeks or months.

Excommunication of minors, she says, put parents in the position of having to either leave the community or abandon their own children. According to Drever, some chose the community, and excommunicated children then became homeless. Drever says that she saw this happen to minors as young as 13. She says she couldn’t let this happen to her own kids – so she left, eventually deciding to leave the church completely and move to the U.S.

She is now part of a small online community speaking out about the church, which includes Cheryl Hope, who Drever knew as a child in Maple Creek.

Hope, now in her 40s, says that she experienced sexual abuse starting from when she was a child. She says it was required for adults to attend church meetings six times on Sundays, and during those times she would be dropped off at the homes of different members.

Hope accuses two Brethren men in Maple Creek of repeatedly abusing and trafficking her during those times. She alleges that she was sent to many homes and locations to meet with various men, and that sometimes, money was exchanged. She alleges she was drugged at least once. One of the men, she says, was particularly brutal.

“As soon as I became the age to explore… he pounced on me.”

Cheryl Hope finally left the church at 17, and has since married and had children. She recently decided that it was time to go public about her story, out of concern for her young family members still in the Church. In May 2022, Hope filed a police report about what happened to her as a child, growing up in a Plymouth Brethren community. She then told her story on the Blackballed podcast, which has featured several interviews with former Brethren members.

They also said that due to Privacy Act concerns, details could not be given. So far, no charges have been laid.

For more about the PBCC and the allegations from former members, listen to the Episode 2 of Ratfucker: https://www.canadaland.com/shows/ratfucker/