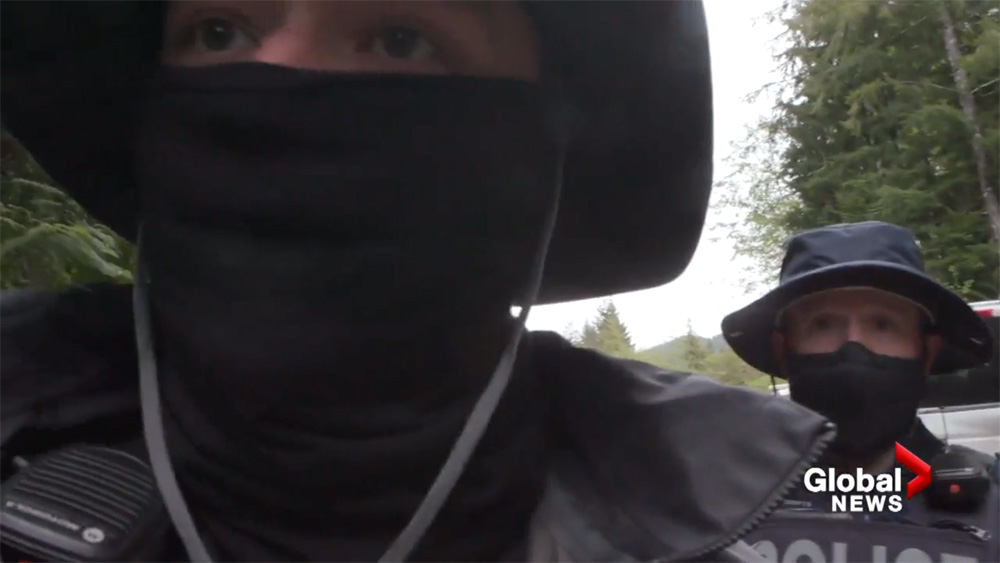 At Fairy Creek, RCMP efforts to restrict media can devolve into theatre of the absurd
Article By Jonathan Goldsbie
Share

On Thursday afternoon, Global News posted video of a BC RCMP officer threatening to arrest one of its journalists.

“Don’t put this in my face,” the officer told the cameraperson. “You will be arrested if you do not comply.”

“Just stop, man,” another pleaded with the press. “Come on. Have some professionalism.”

Here’s how the B.C. RCMP have been prohibiting the working news media at the Fairy Creek blockade. They insist their exclusion zone gives them the power to control the movements of journalists on public land and pick and choose what journalists can cover.https://t.co/HrT64sZaTJ pic.twitter.com/Jve6rIlUcc

The Global journalists had been hoping to cover the blockades organized against old-growth logging on a part of Vancouver Island known as Fairy Creek. On questionable authority, the RCMP has been tightly controlling media access to the area, when not denying it outright.

Earlier Thursday, the Canadian Association of Journalists (CAJ), along with Canadian Journalists for Free Expression and a group of mostly smaller and alternative news organizations (Global not among them), announced they’d be pursuing legal action against the RCMP to enforce the right to report on the blockades.

On this week’s CANADALAND, Cherise Seucharan takes a look at these efforts, why the RCMP’s behaviour seems so familiar, and why independent outlets are once again at the forefront of this fight.

But while it’s no surprise that police can be pushy, threatening, or worse, their hostility toward the media can just as often take a different form.

On May 17, Jimmy Thomson, the managing editor of Capital Daily, recorded his own encounter with a pair of RCMP officers at the edge of the same area. (Capital Daily is a venture of Andrew Wilkinson, whose foundation is an investor in Canadaland.)

The Victoria-based outlet is among those attached to the CAJ’s legal challenge; Thomson also happens to the BC regional director of the CAJ, although he recused himself from the organization’s deliberations on the matter.

His five-minute clip is a vivid illustration of the banal circularity that characterizes many police interactions with the press, where a veneer of politeness masks obstructive intransigence, and manufactured excuses loop around on themselves.

“Speaking with those officers on the ground was really frustrating,” Thomson tells Seucharan, “because they clearly didn’t have, really, any idea of what media do, what the rights of media are, or any interest in it. They saw me as just… being another protester, just another person to be kept out.”

Much of the recording is included in today’s episode, but we’d also like to share a complete transcript, because sometimes such exchanges can be more fully appreciated in writing.

I'd like to share how my day shaped up when I tried to visit the #FairyCreek blockade to observe how the injunction is being enforced.

A country road. Many trees.

Officer 1: How are you doing?

Thomson: Good, thanks. How are you doing?

Thomson: Media, yeah. And I’m hoping to get through to the blockade.

Officer 1: You have to contact Cpl. Manseau with RCMP media relations.

Thomson: I’ve spoken with Cpl. Manseau — not today. Do you guys have — like, obviously, there’s no cell service out here — is there any way to get in touch with him from here?

Officer 1: Not from here. So nobody’s going through today. But you have to get in contact with him.

Thomson: Okay… So you’re not even letting media in…

Thomson: …at this point.

Thomson: Why is that?

Thomson: I didn’t see that in the injunction.

Officer 1: It’s part of the operations, right now. It’ll be in place tomorrow.

Thomson: Can you explain that a little bit more?

Officer 1: You can drive back to cell service and give him a phone call.

Officer 1: No, we’ve been told to advise people that he’s available by phone and tomorrow.

Thomson: So he doesn’t have any way to contact you guys?

Thomson: So how would you know if he had told me that I can go ahead?

Thomson: I would really appreciate if you could check with them, because, I mean, that doesn’t seem reasonable, to not be letting media in.

Officer 2: Do you have, also, any piece of ID so we can verify? Do you have your accreditation or (inaudible)?

Thomson: I have a business card.

Officer 1: No, a media accreditation.

Thomson: It’s not a real thing.

Thomson: There’s no, like, a media accreditation body in Canada. I’m on the board of the Canadian Association of Journalists.

Thomson: There’s no such thing as, like, a card that says “I’m the media.” So…

Officer 1: So you want our command to tell you verbally that you can’t come in?

Officer 2: And do you have a piece of ID with your name and everything else? Like a photo ID?

Officer 2: So we can check with the name and everything else?

Voice from police radio: Yep, 10-4. (inaudible) They’re all instructed to deal with stratcom.

Officer 1: Stratcom, which is Cpl. Manseau.

Thomson: Okay. And there’s no way of contacting him from here?

Officer 1: Not from here.

Thomson: Not by me and not by you?

Thomson: So if I drove five minutes back down that way, and then drive back here and say I just talked to Cpl. Manseau, then… (laughs)

Officer 1: It would come through our command post, if he gave you instructions. But we know that there is no instruction for media today.

Officer 1: So the instructions is to contact Cpl. Manseau.

Thomson: But that’s the thing. It’s like, why, the RCMP doesn’t really have the authority to instruct the media when this is an issue of…

Thomson: But I’m not here to obstruct the work that is…

Officer 1: But if you come past here, it’s an obstruction, yes.

Thomson: The obstruction of the loggers is the arena for the injunction, not the observation of logging activities.

Officer 1: Right now, you’re not gonna come through here today. You need to talk to Cpl. Manseau. And get further direction from him.

Thomson: But I can’t talk to Cpl. Manseau…

Officer 1: You can drive down and get cell service. It’s not a (inaudible).

Officer 2: So our understanding is that, up to this point, all the media have already received their instructions and what are the steps to be taken…

Officer 2: Okay, so everybody knew — because you’re not the only one that’s coming from the media today.

Thomson: And where are they right now?

Officer 2: And we had lots of other people. And they were explained, and it’s like, “Yeah, okay, we got it.” Everybody’s been instructed. So that was our directions that we have. We just checked with our command post, again, for you, like right now. And these are the directives that we are giving to you. You need to get in touch with the liaison for the media. Okay? And I don’t know, maybe get your name on a list or something like that? And that would be transmitted to us. But right now, we are not letting anybody going in there.

Thomson: Right. So there’s enforcement action happening right now that you’re not allowing the media to be there to witness or to report on.

Officer 1: But there is no enforcement action right now.

Thomson: So you’re enforcing the injunction.

Thomson: Right. As a result of the injunction… (sighs) Okay, well, thank you both for your time. Appreciate it.

Thomson wrote that he then drove back to town to place a call to Cpl. Chris Manseau.

“He didn’t answer the phone.”