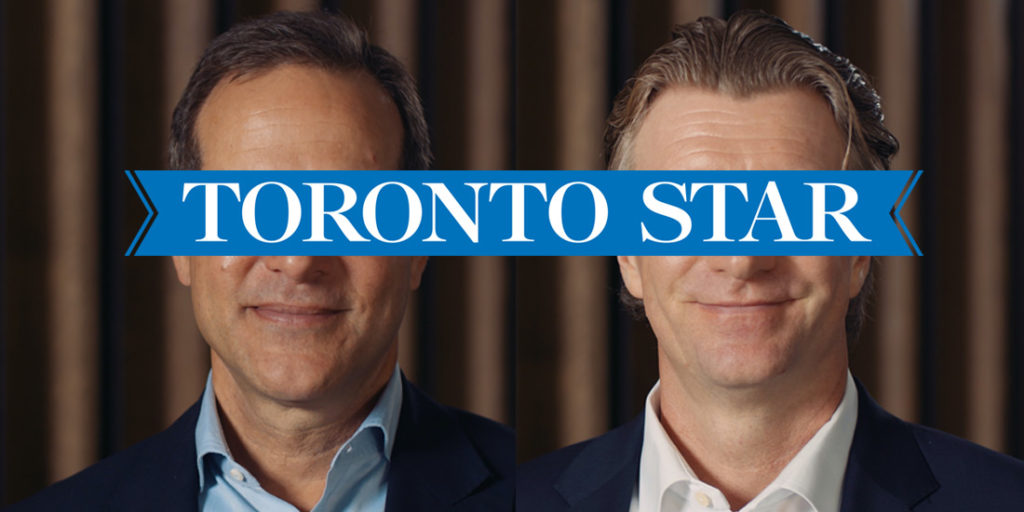 Just before 8:00 Tuesday evening, Torstar sent out a news release announcing its own sale. After years of its share price and management flailing in full view of the public, the TSX-listed company that publishes the Toronto Star, Hamilton Spectator, and dozens of other newspapers will be taken private in a $52 million deal.

The new owners? A recently established company called NordStar Capital LP, registered in Manitoba less than a month ago, with the Toronto office of law firm Norton Rose Fulbright as its official address. The nordstarcapital.ca domain was registered on Sunday afternoon, with nordstarcapital@gmail.com as the email contact.

Tuesday’s news was accompanied by a glossy website, whose home page states four times that NordStar intends to retain the Star‘s “commitment to progressive positions and fearless journalism.” The press kit neatly packages NordStar principals Jordan Bitove and Paul Rivett with bios, portraits, and (almost) perfectly trimmed sound bites. If you want to know who Bitove and Rivett are, there’s plenty of info there about how they, respectively, helped found the Raptors and ran Fairfax Financial. (Ubiquitous crisis-management/PR/lobbying firm Navigator provided NordStar with “strategic counsel,” according to a release.)

They’re the exact kind of people you’d imagine buying the Toronto Star. Except one thing.

But Bitove and Rivett are Conservatives, at least as evidenced by their extensive records of political donations over the past decade. Rivett’s recent contributions include the maximum allowable amount to each of three contestants in the Ontario PC Party’s 2018 leadership race, including Doug Ford, as well as the maximum amount to Maxime Bernier for his 2017 bid for leadership of the federal Conservatives. While Bitove has supported the Liberals on a couple occasions — such as when Bill Blair was fighting to take Scarborough Southwest from the NDP — he made the maximum donation to Erin O’Toole’s Conservative leadership campaign just three months ago.

Perhaps for this reason, Bitove and Rivett will be bringing on former Ontario Premier David Peterson, a professional Liberal power-broker, as vice chair of the Star. It’s not immediately clear what his role as the paper’s de facto mascot may entail, but Peterson’s salary will almost certainly remain secret; with Torstar becoming a private company, it will no longer be obligated to disclose the compensation paid out to its executives and board members.

Your periodic reminder that David Peterson, soon to be vice-chair of Torstar, once sat on the board of a made-up company that was just a front for the Russian mafia. https://t.co/O6wWrtaO26

Asked on Wednesday morning about the impact the new owners’ political leanings might have on the company, Torstar CEO Boynton told an employee town hall meeting that he hoped their connections across the board could be helpful.

“It’s no doubt that they have strong connections in Ottawa,” he said. “And we would hope that they could start using those connections to help us in Ottawa with some of the systemic issues, especially that we have with FANG — Facebook, Apple, Netflix, and Google — in trying to level the playing field that Canadian companies have dealing with American companies that are treated better than we are.”

Asked about the new owners’ Conservative donations at a virtual town hall this morning, Torstar CEO John Boynton said he hoped their political connections could be helpful: pic.twitter.com/gqLMBgRLEq

Here are the political donations from Paul Rivett and Jordan Bitove recorded in the Elections Canada and Elections Ontario online databases:

Elements of top image via NordStar’s super useful press kit. Post updated on May 27, 2020, at 10:52 p.m. EDT to include Boynton’s comments at the town hall meeting, and again on August 6, 2020, at 9:05 p.m., to include Rivett’s May 29 donation to Peter MacKay’s leadership campaign and clarify that Bitove’s February 24 CPC donation went to Erin O’Toole’s.

By Taylor Lambert
Why is No One Talking About Steven Galloway?