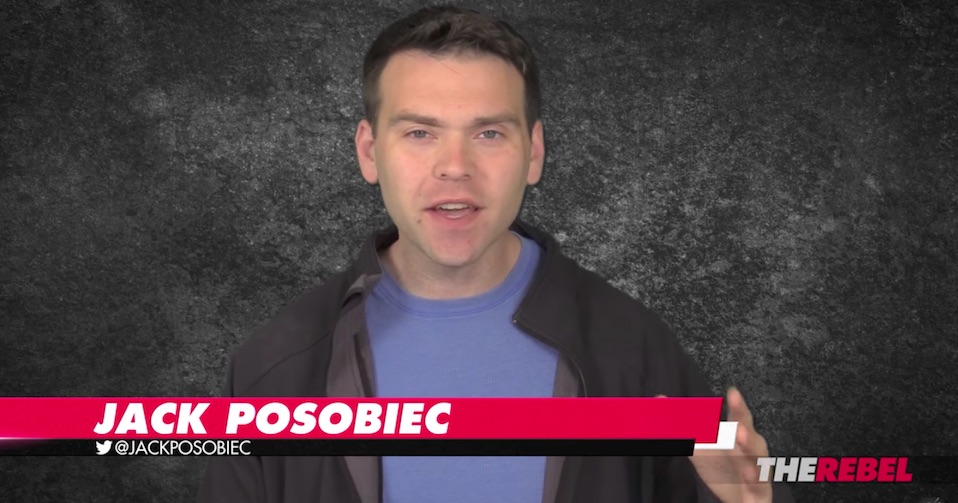 The Rebel has admitted that its former Washington correspondent, Jack Posobiec, plagiarized the work of an extreme-right American activist in one of his videos while still with the Canadian-based alt-right media outlet.

Early on the morning of June 19, freelance journalist Jason Kessler — who has been profiled by the Anti-Defamation League and the Southern Poverty Law Center as a white supremacist and an extremist, respectively —  tweeted, “Several instances of Jack Posobiec making a buck off my content.” The tweet was accompanied with three links to sections of a video Kessler made in the middle of March juxtaposed with three nearly identical clips from a Rebel video Posobiec published a month later.

In one section of Kessler’s video, he says:

“While there are thousands of smaller extremist groups around the country with many different names — Serge, Answer, WWP, and so on — when they come together in a mass demonstration or riot, they are effectively Antifa. Some of them may refer to themselves as ‘Black Bloc,’ although technically Black Bloc is a tactic and not an organization. It refers to agitators dressing all in black, wearing masks or scarves over their faces and marching together in hordes. The reason that they do this is to make it hard to identify any particular member who has done some illegal activity like break a window, start a fire, steal a camera, or pepper-spraying an innocent victim.”

“Now, there’s thousands of smaller extremist groups across the country with many different names — like Serge, Answer, WWP, whatever — but when they come together in a mass demonstration or a riot, they’re effectively Antifa. Check out gotnews.com for more on that. The call their masks and dark ISIS-like uniforms formed up altogether a ‘Black Bloc.’ So the Black Bloc is a direct-action tactic primarily used by Antifa to resist or engage police or opposition forces. It refers to the agitators dressing all in black, wearing masks or scarves over their faces, and marching together in the hordes. The reason they do this is to make it hard to identify any particular member who’s done some illegal activity like breaking a window, starting a fire, stealing a camera, or pepper-spraying one of their innocent victims.”

Two other sections of the videos are also nearly word-for-word the same.

Shortly after Kessler’s tweet, Rebel Media owner and self-dubbed “commander” Ezra Levant told American right-wing news outlet The Daily Caller that he was “shocked” and that he “immediately reached out to Mr. Kessler” to “correct matters.”

The Rebel video now includes an apology, added the following day, saying that Kessler has been given “all advertising revenues earned from this video,” which has racked up over 200,000 views.

Kessler had first called out Posobiec on Twitter the day after The Rebel published the copy-cat video in April but didn’t bring it to Levant’s attention.

“I notified Jack that I’d seen the plagiarism a few months back. At the time, I decided to keep mum, but after seeing the way he viciously denounced the June 25th Free Speech Rally in Washington DC I’m attending because he disagreed with some of the speakers, I felt like folks should know that Jack’s idea of speech includes plagiarism,” Kessler told CANADALAND by email in late June. He did not respond when asked about the value of the advertising revenue shared by The Rebel.

Posobiec, a navy veteran, political operative, and former head of Citizens for Trump, did not respond to a request for comment, but did claim to The Daily Caller that he had “permission” from Kessler’s editor.

Another tweet by Posobiec seems to suggest that he has a nonchalant attitude toward plagiarism:

Every master's thesis is plagiarized https://t.co/y4nBbxPec6

CANADALAND reviewed a few more of Posobiec’s Rebel videos and found another instance of what appears to be plagiarism. In a video about the #MacronLeaks — a data dump of documents from then-French presidential candidate Emmanuel Macron’s campaign, which Posobiec helped spread and make viral without first verifying their authenticity — Posobiec draws heavily from the work of Disobedient Media’s William Craddick, who he does mention in the video but doesn’t attribute when quoting. He uses sentences nearly word-for-word from two of the author’s articles.

A bit later in the video, Posobiec doesn’t properly cite another sentence by Craddick, though he does show an unattributed image of the text. Posobiec says, “French prosecutors described the leak as — quote — a suspected attempt to tar presidential candidate Emmanuel Macron — and have opened a probe into the origin of the leaks after Mr. Macron filed a complaint.”

The original article reads: “French prosecutors described the leak as ‘a suspected attempt to tar presidential candidate Emmanuel Macron’ and have opened a probe into the origin of the leaks after Mr. Macron filed a complaint.”

Some right-wing commentators were skeptical of Rebel Media hiring Posobiec in the first place because of his past work in purveying disinformation and fake news as a political operative.

Right-wing vlogger and journalist James Allsup created a video questioning The Rebel’s hiring of Posobiec by going over his dubious past as a conspiracy theorist and political trickster.

In reviewing previous deceptions by Posobiec, Allsup pointed out that Posobiec was behind the phony anti-Trump protester holding the infamous “RAPE MELANIA” sign to smear real protesters shortly after the U.S. election.

Before joining The Rebel, Posobiec was also known for having stoked the flames of the Pizzagate conspiracy theory by doing a live-stream from inside the restaurant at the centre of it. He was asked to leave the premises, but then went on Alex Jones’s Infowars to continue casting aspersions on the pizzeria.

“Rebel knew who they were hiring when they hired Jack, but evidently it didn’t bother them that much. To me, this indicates that The Rebel and Ezra Levant were cool with a known hoax artist. They’re fine with giving a platform to someone who will deceive their hundreds of thousands of YouTube subscribers,” said Allsup at the end of his video.

Posobiec was hired by Rebel Media in early April and received White House press access on at least one occasion. By the end of May, Posobiec and The Rebel parted ways, with his last video posted on May 26. Although a rumour circulated that Posobiec had been fired for promoting the conspiracy theory that Democratic National Committee employee Seth Rich was assassinated for leaking DNC emails to WikiLeaks, Levant denied that was the reason.

Earlier in the month, Rebel posted a video of Posobiec apologizing to a former Rebel colleague, French Canadian journalist Eric Duhaime, for falsely claiming that Duhaime had been “instrumental in helping translate the [Macron] documents and my reporting.” Duhaime denied ever helping Posobiec and — according to Frank Magazine — threatened legal action. Posobiec soon explained the lie as “trolling” the media.

Asked to confirm whether he threatened The Rebel and Posobiec with a defamation suit, Duhaime told CANADALAND only that he “did not threaten The Rebel.”

Duhaime has not appeared in a Rebel video since mid-May.

While Posobiec was still with The Rebel, he also made appearances on Infowars positing conspiracy theories such as that Macron’s wife had originally seduced him so the state could control him. “It may be a way that they found this guy very young and a way to essentially turn him into a puppet, turn him into a marionette, and now they’re plying him with drugs — keeping him drugged up — and getting him to do whatever they want… The way that they are controlling him, the same kind of mind control they use for celebrities, for actors, for musicians we see around the world.”

Jesus christ, the #MacronLeaks guy is on Infowars saying Macron's wife may have seduced him so that govt could "mind control" him with drugs pic.twitter.com/LE6XycSTDU

Update (8/12/2017, 5:35 p.m.): The first two paragraphs of this piece have been revised to more accurately describe, and offer additional context concerning, Jason Kessler.