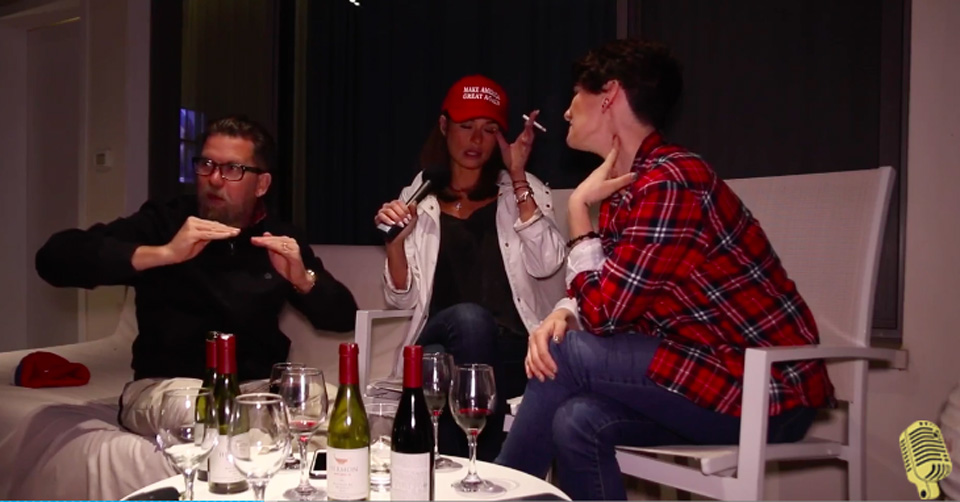 On Tuesday morning, a day and a half after denying he hates Jews, The Rebel Media’s Gavin McInnes posted a video entitled “10 Things I Hate About Jews.”

But within 12 hours, and after receiving some blowback, The Rebel made the unusual move of changing the title to “10 Things I Hate About Israel.”

“I chose both headlines,” Rebel head Ezra Levant tells CANADALAND in an email. “I liked the first one because it was provocative; but then I changed it to the second one because it was more descriptive. I should probably have stayed with my first instincts.”

The original certainly was provocative — but it’s hard to argue on behalf of quasi-ironic shock value when McInnes really, really seems to enjoy telling anyone who might listen that he is not a fan of Jews.

10 THINGS I HATE ABOUT THE GODDAMN MOTHERFUCKING JEWS! https://t.co/yb98E8FQYF

On last Thursday’s edition of The Gavin McInnes Show — the guy’s other gig, whose daily episodes are kept behind Compound Media’s paywall — the Vice co-founder sat down with Rebel colleagues Faith Goldy and Sheila Gunn Reid in a hotel-like room at a kibbutz near the Golan Heights. Accompanying them were four bottles of wine, three of which had been emptied prior to cameras rolling.

The first half of the 56-minute video consists of McInnes pushing a deeply uncomfortable Goldy to talk about her personal life and why at 27 — and in spite of her firm belief in “breeding” for the sake of “the West” — she has yet to have any children. In particular, he’d like to know why her boyfriend has yet to propose to her after five years — to which a mortified Goldy, on the verge of tears, can only offer that “feminism is cancer.”

But the second half is politics talk, with McInnes repeatedly steering the conversation back to the pressing topic of why he doesn’t like Jews. At one point, Gunn Reid suggests, “Can we talk about the settlements for a second?” and they seem relieved to move on to something less controversial.

Here are some more excerpts from that bigoted black hole of paid right-wing content down which we have recently fallen:

The Rebel crew on…

Gavin McInnes: We’re here in Israel, where we’re supposed to be brainwashed by Kim Jong-Ezra Levant…

McInnes: The Jewnicorn is supposed to…

McInnes: He wants us to love the IDF and be mad about the Holocaust and all that stuff. Um, and I think it’s had the reverse effect: if there’s one thing that I’ve learned when I’m here on this propaganda tour, it’s that I’m mad at Jews.

McInnes: And I’m mad at Jews for the same reason I’m mad at Christians for, and it’s ethno-masochism. And—

McInnes: Can I say something that’s kinda controversial?

McInnes: If you’re announcing you’re gonna bomb Muslims — and I’ve been amongst them for a week now — can you also announce deodorant?

Goldy: <laughs> We actually have a really good plan! Okay? Do you want to tell [the viewers]?

McInnes: Why don’t you send… You know, there’s a bomb that they send to the house they’re gonna blow up that’s just a beeping thing…

McInnes: …it doesn’t do any damage. Like boop boop boop. If that could have deodorant in it… and be like “Boop boop boop, grab deodorant, we’re gonna bomb you.” Because… I’m sorry if this comes across as anti-Muslim, but… they reek.

Goldy: I dunno, I’m like a Western Mediterranean, I got Greek blood in me.

Goldy: I’ve been on the bus with some of my countrymen, and let me just tell you it’s not a pleasant experience. But let’s really get to the crux of the matter, and that’s the fact that we need to launch the next Crusade and reclaim Bethlehem.

McInnes: So we’re essentially going through a sort of a holocaust, and as we go through it, the white people, the ethnic Christians are rolling their eyes and going, “Oh yeah, sure, I’m so scared.”

…the relative merits of Jews:

McInnes: But what the fuck is the matter with Jews?

McInnes: They’re fundamentally, they have the same, like, Judeo-, people who say Judeo-Christian values are, it’s a myth to try to unify the two, we both have the same flaws. Jews are smarter than Christians — generally. But—

Goldy: Thomas Aquinas. We had a couple of stars.

McInnes: We’ve had a few stars.

Goldy: They have Albert Einstein.

McInnes: But they both have this same suicidal mentality, which is, “I suck. Everyone else is smarter. If someone has a beef with me, they’re right.” And um, Jews are — even in Israel, where they’re at war — they don’t want guns.

Goldy: <to the camera> We’re in a kibbutz right now, people.

Goldy: But I don’t get it. No, but why here? Like, I understand, like, abroad, most of the Jews, especially in big cities, are giant Democrat-donor losers, who don’t understand that that party stands against their interests, especially when it comes to Israel and taxing them, because by and large, they’re frankly wealthier and smarter than us; that’s just, like, a fact. But I don’t understand where you get the, like, hate for the Aryans, so to speak.

McInnes: Well, we’re at the Holocaust museum, and we’re being told, “The Germans did this. The Germans are horrible people…”

Goldy: You want to talk about how Jews hate white blonds.

Goldy: I think that’s based on nothing.

Goldy and Gunn Reid together: Yeah!

Gunn Reid: I think that’s just a feeling you have.

McInnes: You girls are insane.

Goldy and Gunn Reid together:: No!

McInnes, signing off: I think that most of my colleagues have been brainwashed on this trip, and that Palestine has been trying hard to survive, but they keep getting extinguished by money from big Jewbags, who are funding them not being able to survive. So, I just want to make it clear. Thanks for tuning in to the show. And Jews are ruining the world with their lies and their money and their hooked-nose, bagel-eating faces.

And lest you think, “Oh, he’s sympathizing with the Palestinians,” you might recall that the day before he referred to them as “stupid Rottweilers” who demand to be (figuratively) punched in the face.