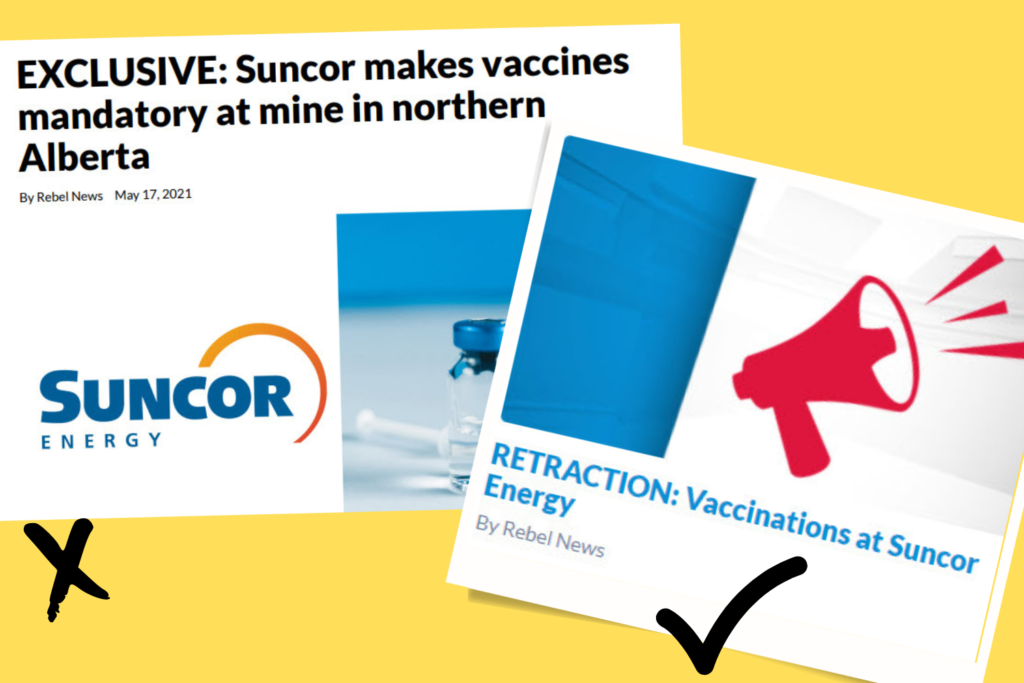 On May 17, The Rebel posted an “EXCLUSIVE” story — citing an “internal letter,” the far-right site reported that the Canadian energy company Suncor would be forcing Moderna vaccinations on workers at a Northern Alberta mine. Without proof of a COVID-19 vaccination, the letter stated, they would be denied entry to the worksite after June.

The article has since been removed from the site, and a retraction has been posted.

The letter appears to have been fabricated. Canadaland obtained a PDF copy of The Rebel’s story from a listener, Derrick Becking.

The article included a photo of the letter in its entirety. 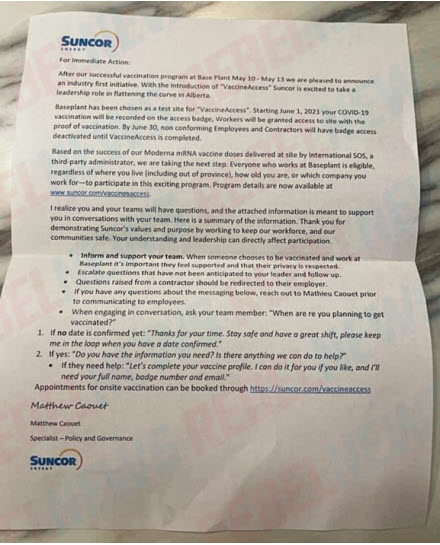 “Baseplant has been chosen as a test site for ‘VaccineAccess,’” it said. “Starting June 1, 2021 your COVID-19 vaccination will be recorded on the access badge. Workers will be granted access to site with the proof of vaccination. By June 30, non conforming Employees and Contractors will have badge access deactivated until VaccineAccess is completed.” (sic)

Suncor sent out a tweet at 6:05 p.m. EDT saying that there was misinformation being spread and that worker vaccinations are in fact not mandatory.

We are aware that there is some misinformation being shared about Suncor’s approach to vaccinations. Vaccinations are not mandatory for our workforce.

The seemingly fabricated letter was signed with the name “Matthew Caouet,” whom it identified as a policy and governance specialist (and whose given name was offered elsewhere in the document as “Mathieu”). There does not appear to be a LinkedIn profile for anyone named Matthew Caouet who works at Suncor, or any other digital trace of a Suncor employee named Matthew Caouet.

Suncor could not immediately be reached for comment about whether an individual with this name is employed at their business.

Suncor has publicly shared information about on-site vaccination clinics where they partnered with Alberta Health Services to provide a limited number of Moderna mRNA shots to employees. The site does not indicate that vaccines will be mandatory.

As vaccine clinics for workers at our Base Plant wrap up, we’ve expanded them to our MacKay River, Fort Hills and Firebag sites. Vaccines are an important layer of protection for our workforce and the communities where we live and operate. https://t.co/I6hgiOLpQh #ymm #RMWB pic.twitter.com/XyVOtaGrex

The Rebel did not immediately respond to Canadaland’s questions about what steps, if any, they took to verify the letter before publishing it.