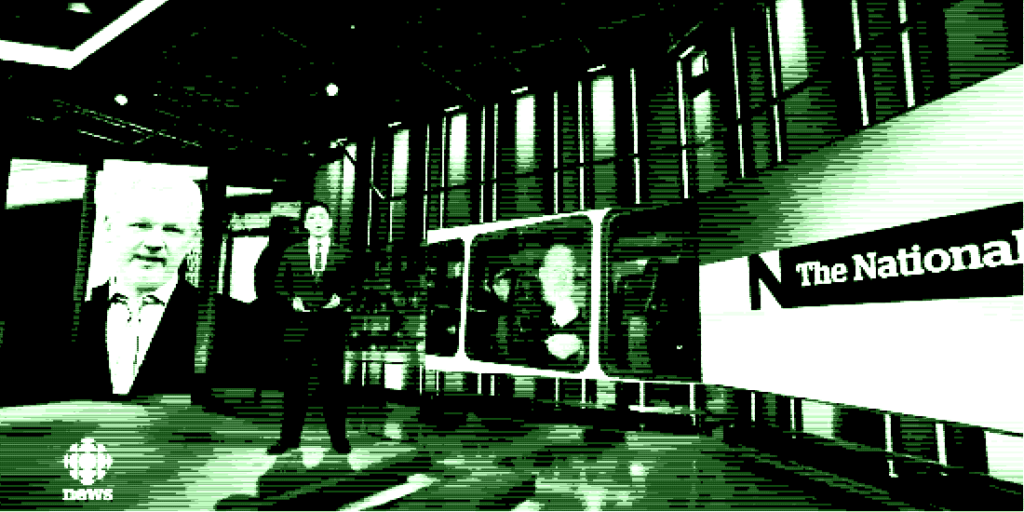 In Smearing Julian Assange, Our Press Have Become Hypocrites

Now that Wikileaks founder Julian Assange has finally been carted off to a high-security London prison, just as he said he would be, it’s been an eerie spectacle watching the fourth estate discredit and smear the man who once helped them set the table so they could partake, publish, and profit. News consumers can only reach these conclusions: Assange is a narcissistic man with hygiene issues; a Russian pawn who steals government secrets; someone who deserves to be arrested for running away from sexual-misconduct investigations; and, besides, he’s not really a journalist.

Calling out the state for taking a giant step towards criminalizing journalism hasn’t yet worked its way into mainstream Canadian news cycles, let alone lit up debates around pundit tables.

The preoccupation with maligning Assange’s character and not bringing context and analysis to what his arrest might mean to press freedoms is un-journalistic at best. Reporters are not just violating “Journalism 101” best practices, but are trampling on the public’s right to know. The anti-journalism ranges from subtle and not-so-subtle fact omissions to broad-brush tarnishing.

Here are some examples:

“In 2012, the Australian activist sought refuge at the Ecuadorian embassy on a completely unrelated case. He had been accused of sexual assault in Sweden. That case has been dropped. In recent years, he stayed to avoid what happened today.”

Assange wasn’t hiding from sexual-impropriety investigations as Filippone implies, he was hiding from US extradition. Public records show that Assange repeatedly made himself available to Swedish authorities for questioning in Sweden and in England, but he was never interviewed. Only when Sweden and Britain refused to guarantee they wouldn’t hand him over to the US did he jump bail to seek asylum in the Ecuadorian embassy. Now that Swedish prosecutors have reopened the case a month after Assange’s arrest and before the statute of limitations expires in 2020, Wikileaks posted a statement saying that restarting legal proceedings will “give [Assange] a chance to clear his name.”

“Assange tried to shine a light on what my boss calls the dark corners. And that is also what journalism at its best is. But I don’t think Julian Assange is a journalist.”

Wikileaks publications have a 100% accuracy record. Blatchford reaches into a dark corner of her own: “He looked like a madman, as I guess would be expected,” she reports. “According to unnamed sources in The Times of London, he smeared feces on the wall, he rollerbladed up and down the halls, he had an endless procession of celebrity guests, et cetera.”

Independent Australian journalist Caitlin Johnstone suggests these claims epitomize the overarching establishment narrative. “It’s a completely unsubstantiated claim designed not to advance a logical argument about the current facts of Assange’s situation but to provoke disgust and revulsion towards him, so that when you think of Julian Assange you don’t think about press freedoms and government transparency, you think about poo.”

Jim Turk, director of Ryerson University’s Centre for Free Expression told Canadaland that the efforts to vilify Assange have proved successful. “It’s not surprising that those who want to hide things, be they governments or corporations, take a very dim view of and go to great lengths to denigrate people like Assange,” he says.

“I suspect, but don’t know for certain, that the [mainstream media’s] recoiling from Assange is because they are now embarrassed that they courted him so ardently before,” Jeffrey Dvorkin, the director of the journalism program at the University of Toronto Scarborough Campus, told Canadaland.

“What he showed was that mainstream news organizations were desperate and willing to take his content. In a hollowed-out digital environment, the [mainstream media] contracted out their own willingness to do investigative reporting.” Dvorkin agrees that Assange “has shown some journalistic tendencies” but sees Assange “as a political player with a willingness to undermine liberal institutions, much like The Intercept and Greenwald.” Glenn Greenwald and The Intercept news organization he co-founded are responsible for publishing NSA whistleblower Edward Snowden’s disclosures about global surveillance.

Much of the reporting around Assange’s arrest ignores or minimizes US war crimes by leaving unacknowledged the vital role Wikileaks played in the releases of the Afghan War Diaries and the Iraq War Logs, which include “Collateral Murder,” the helicopter-gunsight video of unprovoked slayings of a Reuters reporter and his rescuers.

US military analyst Chelsea Manning, who first offered the video to The Washington Post and The New York Times (both turned it down), describes in leaked audio from her 2013 court-martial why she leaked it: “The most alarming aspect of the video for me, was the seemingly delight of bloodlust they [the pilots] appeared to have. They dehumanized the individuals they were engaging with, and seemed to not value human life in referring to them as ‘dead bastards,’ and congratulating each other on the ability to kill in large numbers.”

Andrew Chang, co-host of CBC’s The National shows a clip of the video, but it’s silent and none of the 12 or more killings are shown. “It was a side of the Iraq war the US public hadn’t seen,” Chang says.

Canadians also discovered another side of the Iraq war courtesy of Wikileaks. “The same day Canada publicly refused to join the 2003 US-led invasion of Iraq, a high-ranking Canadian official was secretly promising the Americans clandestine military support for the fiercely controversial operation,” reported Greg Weston in a 2011 CBC story based on diplomatic memos released to the broadcaster by Wikileaks.

None of the details of Wikileaks’ most sensational publications makes it into the CBC newscast. Chang throws to CBC Washington correspondent Keith Boag for the US perspective. Boag says: “Assange really does seem to focus on US secrets rather than those of other countries such as Russia or China.”

Not so. With two clicks, anybody can access tens of thousands of Russian and Chinese documents on the Wikileaks website.

Boag adds: “And in the 2016 election he seemed clearly to be a Russian tool in the dissemination of the Clinton campaign e-mails.”

This is an unsubstantiated claim made frequently by officials and repeated by reporters for which no evidence has been produced, including in the Mueller report.

“It is worth noting that Mueller declined the offer to hear Julian’s testimony [about the Clinton e-mails],” WikiLeaks editor-in-chief Kristinn Hrafnsson says in a Der Spiegel interview.

Boag also said that Assange “even had his own show on Russian state television for a while,” without giving the context that Assange’s 2012 show The World Tomorrow was produced by his own production company, Quick Roll Productions, in association with independent UK documentary producer and distributor Dartmouth Films. The episodes were licensed to RT America.

“The Assange arrest is scandalous in several respects,” said Noam Chomsky on Democracy Now! in April. “One of them is just the effort of governments — and it’s not just the US government. The British are cooperating. Ecuador, of course, is now cooperating. Sweden, before, had cooperated. The efforts to silence a journalist who was producing materials that people in power didn’t want the rascal multitude to know about — that’s basically what happened.”

Hrafnsson, an Icelandic investigative journalist who reported on the collapse of Iceland’s Kaupthing Bank using WikiLeaks documents, says the campaign for Assange’s freedom is the biggest press freedom struggle of the century. “If you are a journalist and you are not fighting for information freedom, for accountability and transparency, then you are not a journalist in my eyes.”

Jeffrey Dvorkin disagrees and suggests there’s no proof for “the argument that Assange needs to be defended by anyone other than by his own lawyer.”

The Canadian Association of Journalists quietly released a statement on its website after Assange was arrested. “The CAJ shares the concerns raised by Amnesty International, the Freedom of the Press Foundation, the Knight First Amendment Institute at Columbia University, and the American Civil Liberties Union (ACLU) about Assange’s arrest.” Writes CAJ president Karyn Pugliese: “Encouraging sources to leak information that is in the public interest to the media is a basic practice of journalism which must be defended. Journalists and whistleblowers have a role to play in protecting citizens in a democracy.”

Turk says the CAJ statement is commendable, but he doesn’t understand why more are not rallying behind it. “What I tried to sort out: Is it that the journalists don’t have the values? The journalist community and the media should be up in arms.”

When I asked Ryerson’s School of Journalism for comment on Assange’s arrest and asked whether Wikileaks should be debated in journalism classrooms, none of its educators or administrators were available. “It’s a tough time of year as professors are just scrambling to mark exams,” writes media relations officer Lauren Clegg in an e-mail.

Pugliese says her organization includes reporters with a wide spectrum of opinions on Assange and Wikileaks. “I recognize that there is a very broad view from people who are absolutely in support of him to people who aren’t sure about him,” says Pugliese in a phone interview. “We do understand that he’s had an important impact on journalism, and I think that’s something all journalists agree on. What we’ve come to a consensus on is that what’s happening is wrong, that whistleblowers need protection. Whether you consider him a whistleblower or a journalist, he has still, as we say, committed an act of journalism, and that needs protection.”

The fact that the US can extradite Assange, an Australian citizen, and prosecute him under US law is a problem for Pugliese and the CAJ. “If Canadians got a leak and they used it in a way the US government didn’t feel was fair or it embarrassed them, are they going to come after Canadian journalists?” asks Pugliese. “You’re getting on a slippery slope. We have whistleblowers in democracies for a reason.”

Extraterritorial application of US law took an ominous leap yesterday when the US Department of Justice unsealed 17 Espionage Act charges against Assange that carry 175 years in prison. Edward Snowden, also charged under the 100-year-old act, tweeted: “The Department of Justice just declared war — not on Wikileaks, but on journalism itself. This is no longer about Julian Assange: This case will decide the future of media.”

The Obama administration went after whistleblowers like no other administration via the Espionage Act, but his Department of Justice concluded that there would be no way to prosecute Assange for publishing classified documents without also prosecuting The New York Times, The Washington Post, The Guardian, and other media outlets for doing the same thing.

Many sections of the 1917 US Espionage Act that gave postal officials the authority to ban newspapers and magazines from the mails, are still law. The National gave the latest superseding indictments against Assange 15 seconds before launching into a panel on electoral wedge issues.

Now that the fig leaf is off and the charges are no longer about hacking, will Canadian news outlets stop taking shots at the messenger and instead report on the clear and present danger to press freedoms? If journalism by innuendo and character smear continues to dominate legacy media coverage around Assange and Wikileaks, surely the notion that media can hold power accountable is as dead as Monty Python’s parrot.