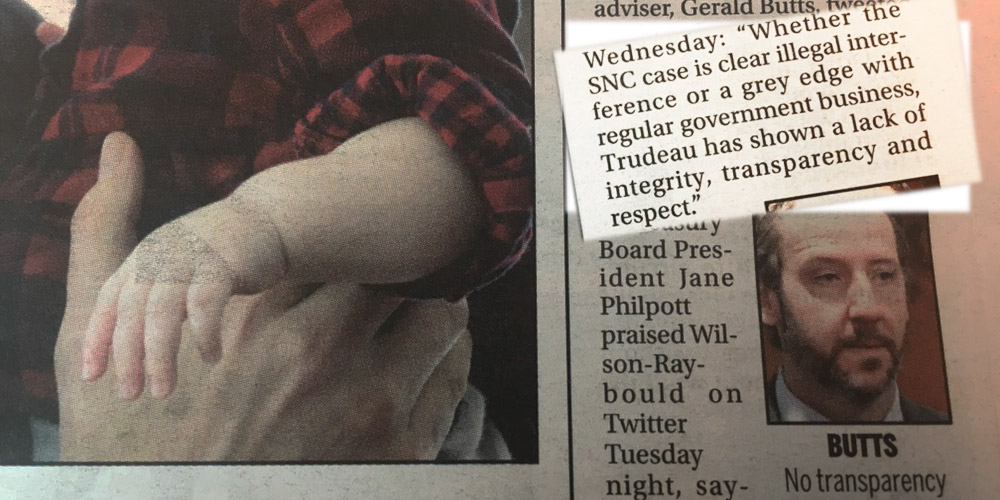 If you got your news this morning from a Sun paper in Toronto, Ottawa, Calgary, or Edmonton, you might be under the impression that Gerald Butts, Justin Trudeau’s most trusted and senior advisor, has shockingly broken ranks with the PM over the SNC-Lavalin case, thrown his support behind former Justice Minister Jody Wilson-Raybould, and publicly denounced his boss for “a lack of integrity, transparency, and respect.”

Of course, Gerald Butts has said no such thing. A fake twitter account with the handle @GeraldButtts (note the three “T”s) is responsible for that quote.

#standwithjody @Puglaas has taken a principled approach that many politicians won't risk votes or status for. Whether the SNC case is clear illegal interference or a grey edge with regular government business, Trudeau has shown a lack of integrity, transparency & respect 1/2..

#standwithjody @Puglaas .. the Liberals should be taught a lesson at the polls this fall that there are consequences. Ask your MP candidates of the other parties (and the party leaders) how they will specifically restore public confidence in national governance 2/2.

Any casual observer of Ottawa politics is familiar with @gmbutts, the verified account of the real Gerald Butts. Whoever wrote Postmedia’s copy — the piece ran without a byline, credited only to “Postmedia Network” — was evidently not.

In Toronto, Ottawa, and Edmonton, the misquote ran under the headline “Liberals in turmoil? MPs break ranks,” along with a picture of Butts. In Calgary, it was simply “Liberals break ranks.”

The error also appeared in online versions of the story published by other Postmedia papers, including the Melfort Journal, Vermilion Standard, and North Bay Nugget, but has since been scrubbed chain-wide, without any correction notice.

On Twitter early Thursday, Lorrie Goldstein, an editor and columnist for the Sun chain, acknowledged the parody account:

For the record, this is a PARODY ACCOUNT. It is NOT @gmbutts who is the Principal Secretary to @JustinTrudeau and he did NOT say this about @Puglaas. #standwithjody #cdnpoli https://t.co/jo3WANXDdI

We’ve reached out to Goldstein and Toronto Sun editor Adrienne Batra and look forward to updating this post if we hear back.

Update (Friday, February 15, 2019, at 11:59 a.m. EST): The four Sun papers that ran the erroneous story published corrections in their Friday editions. There remains no online acknowledgement of the error.