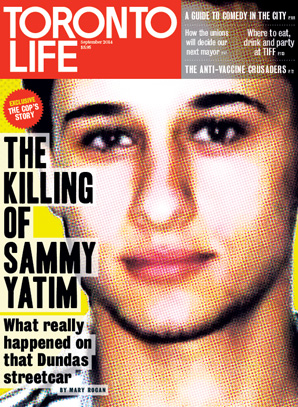 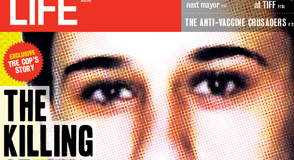 Mary Rogan’s cover story in this month’s Toronto Life promises to deliver “the untold story of the cop who pulled the trigger” in the shooting of Sammy Yatim.

Indeed, a detailed biography of police officer and accused murderer James Forcillo is presented, with his childhood, his stylish wife, his years of service and his “shy, quiet” personality all described. A photo of Forcillo pushing his baby daughter in a swing is included. But before that, Rogan provides a quick account of Sammy Yatim’s last moments unlike any other that has appeared in the press to date.

According to Rogan, Sammy Yatim tried to slash a woman’s throat shortly before he was shot to death by Const. James Forcillo. He also lunged at a streetcar driver with his blade, she writes, and could have reached Forcillo “in one leap” had the officer not shot him. What’s more, if Forcillo had allowed Yatim to exit the streetcar, innocent bystanders would have been in the line of police gunfire, and so Forcillo’s actions, Rogan’s piece suggests, were consistent with his training.

“That’s absurd,” says lawyer Peter Rosenthal, who has represented the families of people killed by police, and who has followed the Yatim case closely.  “The video speaks for itself and speaks very loudly. Yatim wasn’t exiting the streetcar. We can see that he was not in a position to harm anyone. His killing can’t be described as anything but a methodical execution.”

Rosenthal also takes issue with Rogan’s explanation of the “21-foot rule,” an aspect of police training that defines a danger zone between an officer and an armed suspect within which lethal force might be justifiable.“ Forcillo stood roughly 12 feet from the streetcar door, writes Rogan, with Yatim not far behind it, placing the teen well within the danger zone.

“But (the 21 foot rule) only applies if the officer’s gun is in its holster,” says Rosenthal. “She doesn’t mention that.”  Forcillo’s gun was of course drawn, and aimed directly at Yatim throughout the standoff.

Peter Rosenthal isn’t the only one challenging the Toronto Life story.

CANADALAND has spoken to reporters assigned to the Yatim story who say that Mary Rogan’s account of events is indistinguishable from defense statements made by Const. James Forcillo’s lawyer. Due to a publication ban on evidence and testimony from the trial, these reporters have chosen to withhold their names.

At Forcillo’s preliminary hearing, his lawyer Peter Brauti made an opening statement that bears “an uncanny resemblance” to the account found in Rogan’s article, says a reporter who was present in the courtroom. Another reporter wonders if Rogan, who was not present at the preliminary hearing, may have skirted the publication ban if Brauti presented his version of events to Rogan outside of the courtroom. Rogan did indeed interview Brauti for the piece, but she writes that he couldn’t discuss specifics of Forcillo’s case. Nevertheless, Rogan confirms to CANADALAND that Brauti was present whenever she interviewed Irina Forcillo, the wife of the accused officer.

Irina Forcillo, unlike her accused husband, is not prohibited from speaking to the press about the case. But for months, she declined every interview request. She broke her silence for Mary Rogan, assumedly with the blessing of her husband and of Peter Brauti. CANADALAND asked Mary Rogan why Irina Forcillo would speak to her and no-one else.

“I’m not sure,” Rogan answered.  “It’s a question I’ve been asked many times before regarding other pieces. Who knows why people ever decide to talk?”

Rogan says that no terms were placed on the interview by Forcillo or Brauti. She stands by her story, saying she is “confident that what I’ve written in my piece is accurate and was thoroughly fact-checked.” Toronto Life editor Sarah Fulford (FULL DISCLOSURE: I am a former Toronto Life columnist and a friend of Fulford’s) also supports the story. “I can say with confidence that Mary’s description of what happened on that streetcar is correct,” she writes.  “Her sources are good”.

But who are these sources? Where did Rogan get her information from, if not from Forcillo and/or Brauti? Was her detailed account based on video evidence the public has not yet seen? One reporter who has viewed unreleased footage says that it does not confirm Rogan’s account. “It’s unclear what’s going on (in the tape)” says CANADALAND’s source.

CANADALAND asked Mary Rogan how she could be so sure that Yatim did what she says he did. None of the eyewitness accounts quoted in the press to date seem consistent with her telling. One witness on the streetcar, Aaron Li-Hill, told the Toronto Star that Yatim was moving too slowly to seem like a real threat. Did Rogan speak to other eyewitnesses who felt otherwise? Or did she rely on police officers and their lawyers for her information?

“I am not prepared to reveal sources,” writes Rogan, who declined to answer the majority of CANADALAND’s questions.

One source Rogan certainly did not rely on is Julian Falconer, the lawyer representing the Yatim family in their civil suit. If he, or the Yatims, have a different version of events, it is not included in the Toronto Life piece. In fact, Rogan never interviewed Falconer.

CANADALAND reached Julian Falconer by phone. He wouldn’t comment directly on the Toronto Life story or the case, but he did say this:

“In cases like this, there are real incentives to provide narratives and counter-narratives. I’d rather deal with solid evidence in court”.

Did you approach Irina Forcillo directly, or was your access to her arranged through a lawyer?

Peter Brauti was present for my interviews with Irina to ensure the publication ban was not violated.

Irina has turned down every other media request, I believe. Why did she talk to you?

I’m not sure Jesse. It’s a question I’ve been asked many times before regarding other pieces. Who knows why people ever decide to talk?

Were any terms discussed/agreed to, with Irina or Peter Brauti?

On to the piece itself…

Most of the questions that follow from here can be answered yourself, with research, or were gathered from various sources, fact checked and I’m not prepared to reveal those sources.

You write: “Yatim had a stiletto switchblade and had tried to slash the woman’s throat.” This is a major new piece of information in this story, which I believe has not been previously reported.

Can you provide any context at all on how you know this?

Were you present for the opening statements of the preliminary trial?

I did not attend the preliminary hearing

Did you see the TTC surveillance tape?

Did you speak to any of the firsthand witnesses?

Are you confident that this is fact, that Yatim’s intent was to slash her throat, or is that an interpretation of his intent?

This Toronto Star story quoted a man on the streetcar who didn’t feel Yatim was a threat. Did you talk to this witness, or other streetcar passengers who felt differently?

You write: “The driver bolted just as Yatim lunged at him with the knife.”  Who was your source on this? Did you speak to the driver?

Is there any question in your mind as to whether or not Yatim was actually trying to stab the woman and the driver, or just menace and intimidate them?

You write: “He could have reached Forcillo in one leap.” Is this your interpretation of the physical circumstance, or someone else’s?

You write: “If he jumped out into the crowd with his knife, Forcillo wouldn’t have been able to use his gun without endangering bystanders.” Is this your reasoning/observation, or someone else’s?

You write: “Yatim turned away and stepped back into the interior of the streetcar, then appeared to make a decision.” Appeared that way to whom? What was that decision?

Why is Julian Falconer not quoted in the piece?

Because I didn’t interview him

Is it accurate to describe your piece as James Forcillo’s side of the story?

I’ll let reader’s decide how they want to see this story. For my part, I wanted to push past the predictably polarized interpretation of what happened and create a broader discussion. I hope I’ve done that.

Reporters tell CANADALAND that Toronto Life’s version of he story is indistinguishable from defense statements made by Const. James Forcillo’s lawyer.