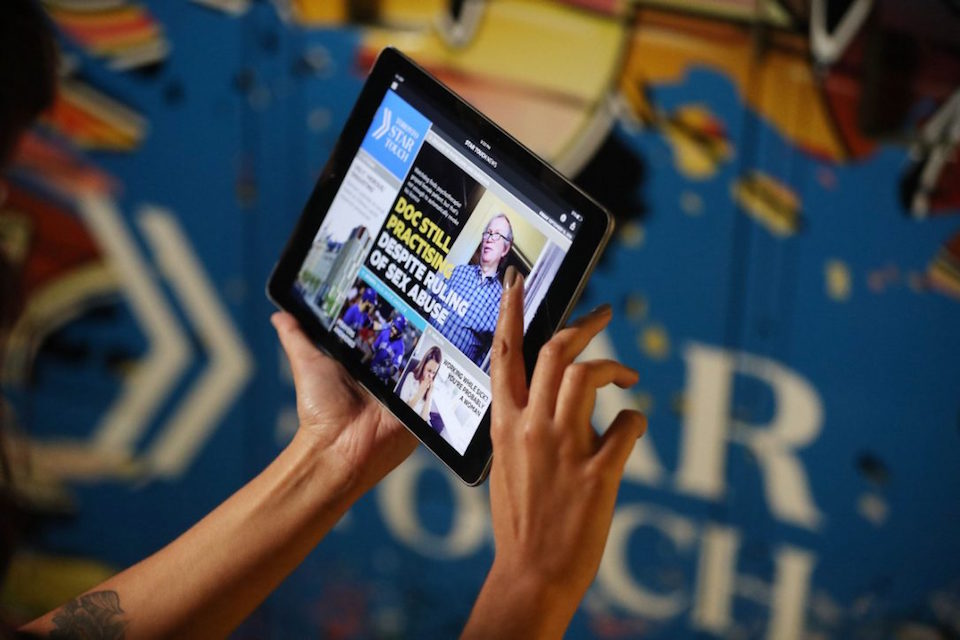 In a pair of internal memos late Monday afternoon, the Toronto Star‘s leadership informed staff that it will be shutting down Star Touch at the end of July, to be replaced by “a new universal app that operates on both smartphones and tablets.” Twenty-nine full-time and one part-time staff will be affected.

Launched in September 2015 with titanic fanfare, the Star‘s tablet app was a product that few asked for and few wanted, sucking up 10s of millions of dollars in the process, including a reported $14 million prior to its debut. A March 2016 Ryerson Review of Journalism feature carried the inevitable headline “Out of Touch.”

Star Touch was modelled on the tablet app from Montreal’s La Presse, which recently announced it will be ceasing all print operations and going digital-only at the end of the year.

After much research, we are announcing today that effective August 1, 2017, we will be replacing Toronto Star Touch with a new universal app that operates on both smartphones and tablets.

This decision was made after an in-depth review of options for apps operating on mobile devices and tablets. The universal app will be available for tablet users by the end of July in the App Store and Google Play.

While Toronto Star Touch is an editorial success and has developed a loyal audience since its launch in 2015, the overall numbers of readers and advertising volumes are significantly lower than what the company had forecast and than what are required to make it a commercial success.

Based on our need to allocate the company’s resources as cost effectively as possible, it’s our intention to simplify and better integrate our digital efforts in an app that feeds both mobile and tablet. The universal app, which is being developed by the people on our digital team, will offer users constant updates, more content, easy navigation and searches as well as easier sharing of content, all of which our customers have requested.

The move will affect a total of 29 full-time and one part-time staff, of which 17 are represented by Unifor. We have formally advised Unifor representatives of this decision. The affected employees have been sent written notification of this decision along with an explanation of their severance entitlements, which will be in accordance with the collective agreement for Unifor-represented staff. Additionally, transition support services will be provided for departing staff.

Although we are obviously disappointed with the financial results of Toronto Star Touch, we can be justifiably proud of the innovative and award-winning product that we created.

Our staff showed great skills, professionalism and creativity in designing and producing a unique daily edition for tablets that allowed us to develop a new way of story-telling that engaged our readers and presented our journalism to its highest potential.

We also had a great partner in La Presse and its platform provider, Nuglif, which it created in 2016, and great vendors who helped us build and operate Toronto Star Touch.

Importantly, we have gained much knowledge over the past two years with Toronto Star Touch.

We learned fast and we learned we could undertake a vast amount of work quickly and efficiently. This fast pace of learning and product development will bode well as we accelerate our efforts to build an agile workplace culture.

As we continue to adapt and transform our company for a more digital future it’s essential that we learn both from our successes and our failures.

Some critical learnings from Toronto Star Touch include understanding how to better create screen-based journalism, how to better visually and graphically portray content, and a better understanding of customer reading habits, including their increasing use of smartphones as their primary source of news. We also proved that the Star can effectively ramp up development of new large-scale startup initiatives in a short timeframe, with application of effective project management governance disciplines.

Using these learnings, we feel the new app will be able to serve customers who want to consume Star news through a tablet app. At the same time, the app will provide a consistent user experience across all digital devices. We have found the overwhelming majority of digital users are multi-platform, and the new app will allow us to start to identify, track and deepen relationships with users no matter how they access content.

Also, we need to simplify our business and having three downloadable apps, namely a tablet app, a mobile app and PDF, confuses consumers and is resource intensive, complex and costly. Having just two apps will simplify this.

We will launch a promotional campaign in July to encourage readers, especially existing Toronto Star Touch users, to download the universal app. At the same time, we will meet with our advertising clients and agencies to introduce them to the universal app. As well, we will be reminding readers about our replica edition, which is a paid product.

As we are all aware, digital is our future and we must evolve – and rapidly – to provide our customers with news and information where and when they want it. I am confident that we have the staff, the talent and the skills to do just that.

On behalf of the executive team, I want to thank everyone who worked on Toronto Star Touch for their contribution and dedication.

And the one from editor-in-chief Michael Cooke:

By now you will have read CEO+Publisher John Boynton’s email.

The news that our tablet product will cease operation in a few weeks is terrible.

There’s no way to spoon honey on to that.

We tried something big and ambitious and expensive.

I thought it would work and we all did our damndest to make it so. Star Touch was an editorial success of which we remain proud. It was named a best news app by Apple and the engagement numbers remain stunning.

But the audience is too small to be sustained as a business.

In committing to the tablet, the Star was deeply informed by the experience of LaPresse+ in Montreal, where a similar product (though in French, of course) was launched earlier, and remains, by accounts as recently as last week, a success — to the point LaPresse is exiting print completely, something that was not contemplated with our launch, and which is not happening here.

Throughout the diligent work before, at and after launch, Star executives and managers, and really all of us, knew there was significant risk that the Montreal experience might not translate to the GTA — arguably the toughest, most saturated media market in North America.

Truth is, we learned a lot, and that is what the digital world is all about as we move forward.

This afternoon is a day for saluting the Touch staff. It is a relief that some will be staying at the Star. To those who are leaving us in several weeks’ time, my sincere professional salute and warm thanks and best wishes.