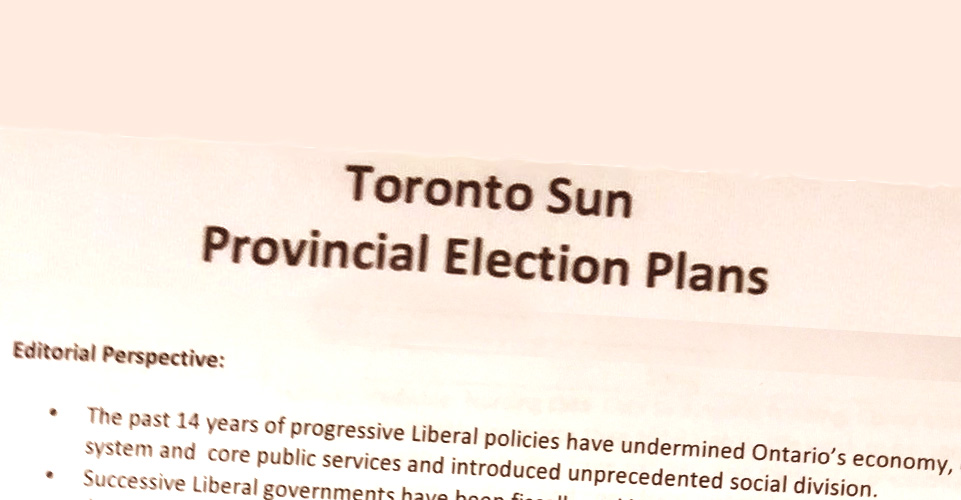 These Appear To Be The Toronto Sun’s Provincial Election Plans

There’s nothing surprising about the fact the Toronto Sun might take an anti-Liberal line heading in to the June 7 Ontario election. What’s somewhat more remarkable, however, is that they’d feel the need to set that down on paper.

A three-page document shared with us by a tipster outlines what appear to be the Sun’s plans for covering the upcoming provincial election. It is headed, appropriately, “Toronto Sun Provincial Election Plans,” and sets out a detailed strategy to take on the Liberals.

“Our focus will focus on exposing the Liberal record during the campaign and advocating for change that addresses the critical need to responsibly address chronic and growing problems in health, education and economy,” reads a section at the top summarizing the “Editorial Perspective.”

The document also takes an explicitly anti-equity standpoint, blaming the Liberals for fuelling division in the “Culture Wars” through efforts “to create equal outcomes over equal opportunity.”

In another section, it highlights “Diversity, Division, Free Speech” as an election issue, declaring that “No government in the history of Ontario has done more to undermine diversity than Ontario’s Liberals. Although they routinely virtue signal their good intentions, Ontario has never been more divided. Instead of focusing on those things we have in common, this government practices race, gender and sexual politics for ideological and political gain.”

It is not clear what the document considers “sexual politics” (as distinct from gender politics). The Sun does not have the most noble track record in this regard.

Neither Toronto Sun editor-in-chief Adrienne Batra — who served as director of communications for Rob Ford’s 2010 mayoral campaign and later as his press secretary — nor James Wallace, VP of editorial for the Sun papers, have responded to our requests for comment.

Below is the full document, followed by a transcription. 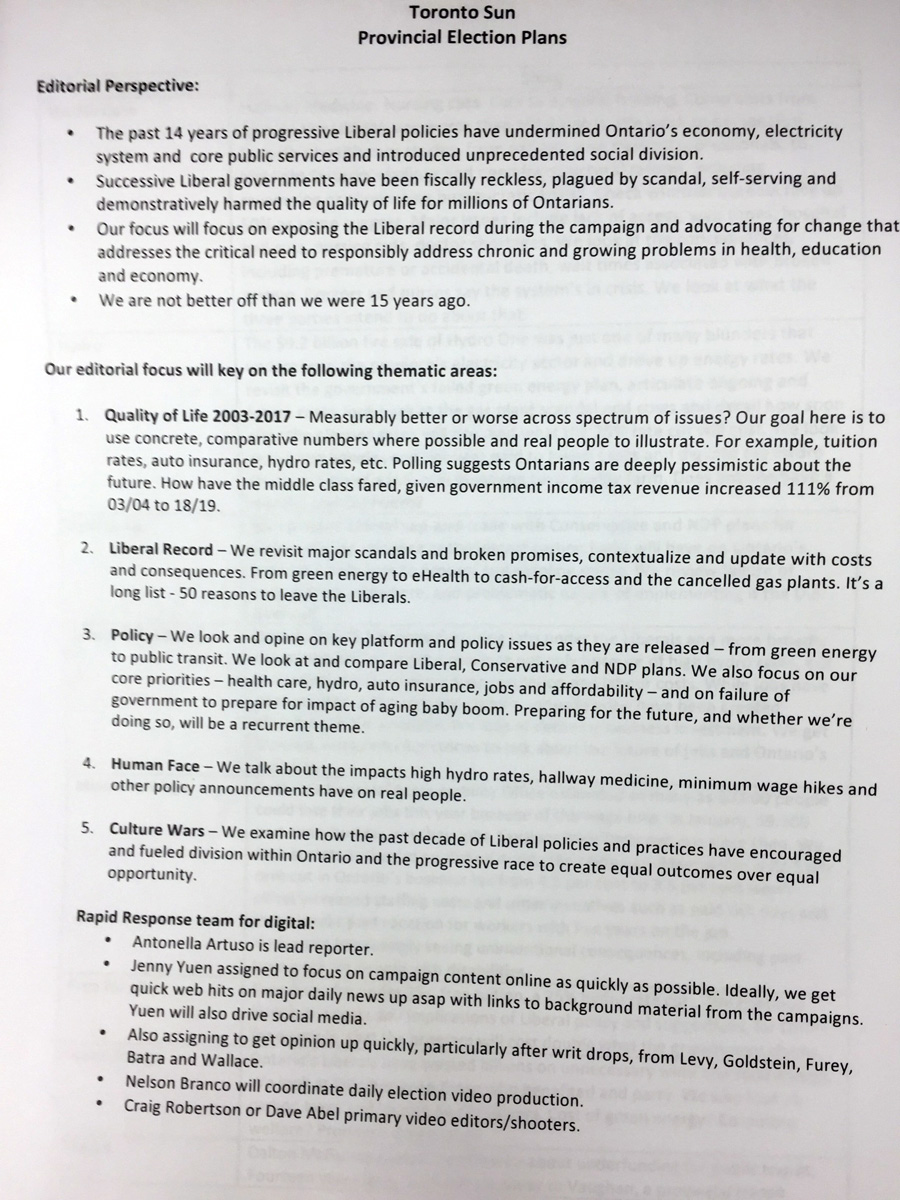 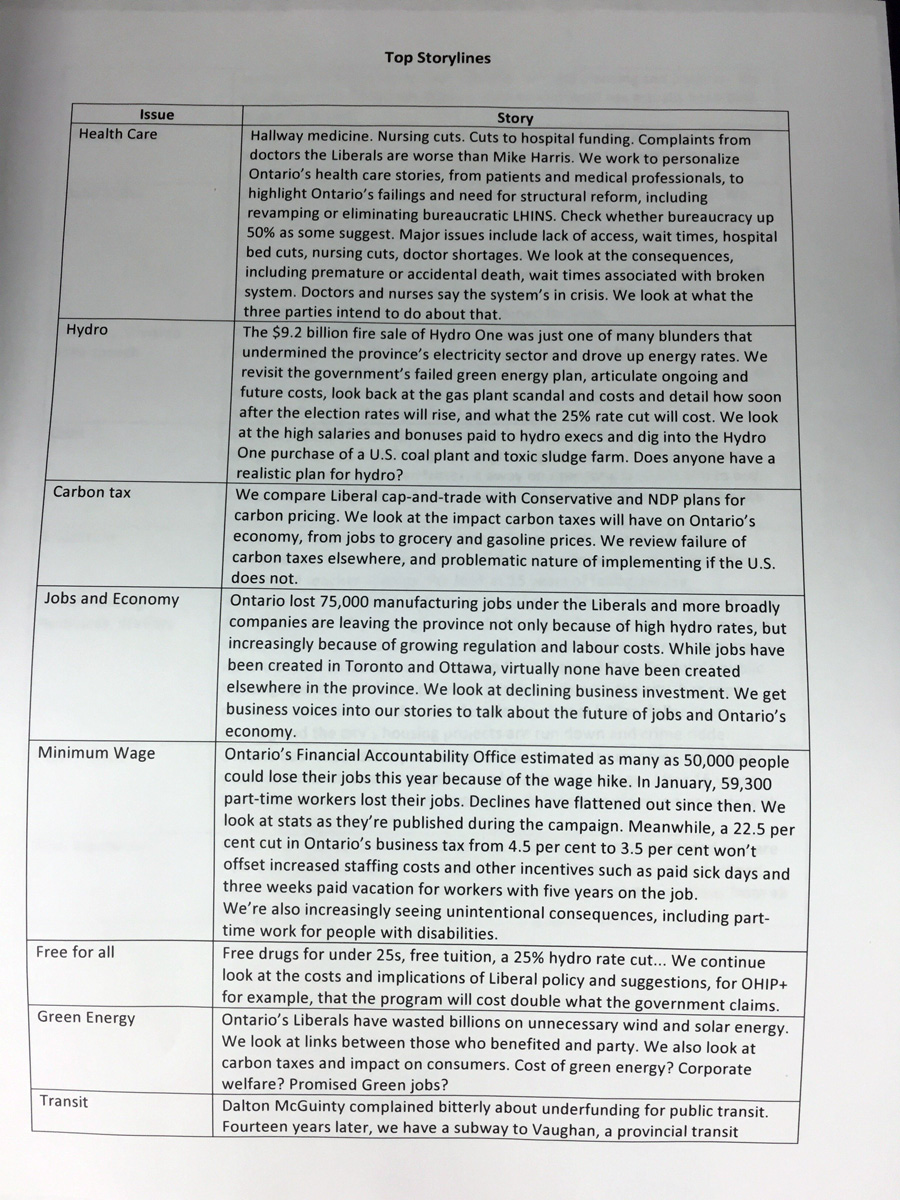 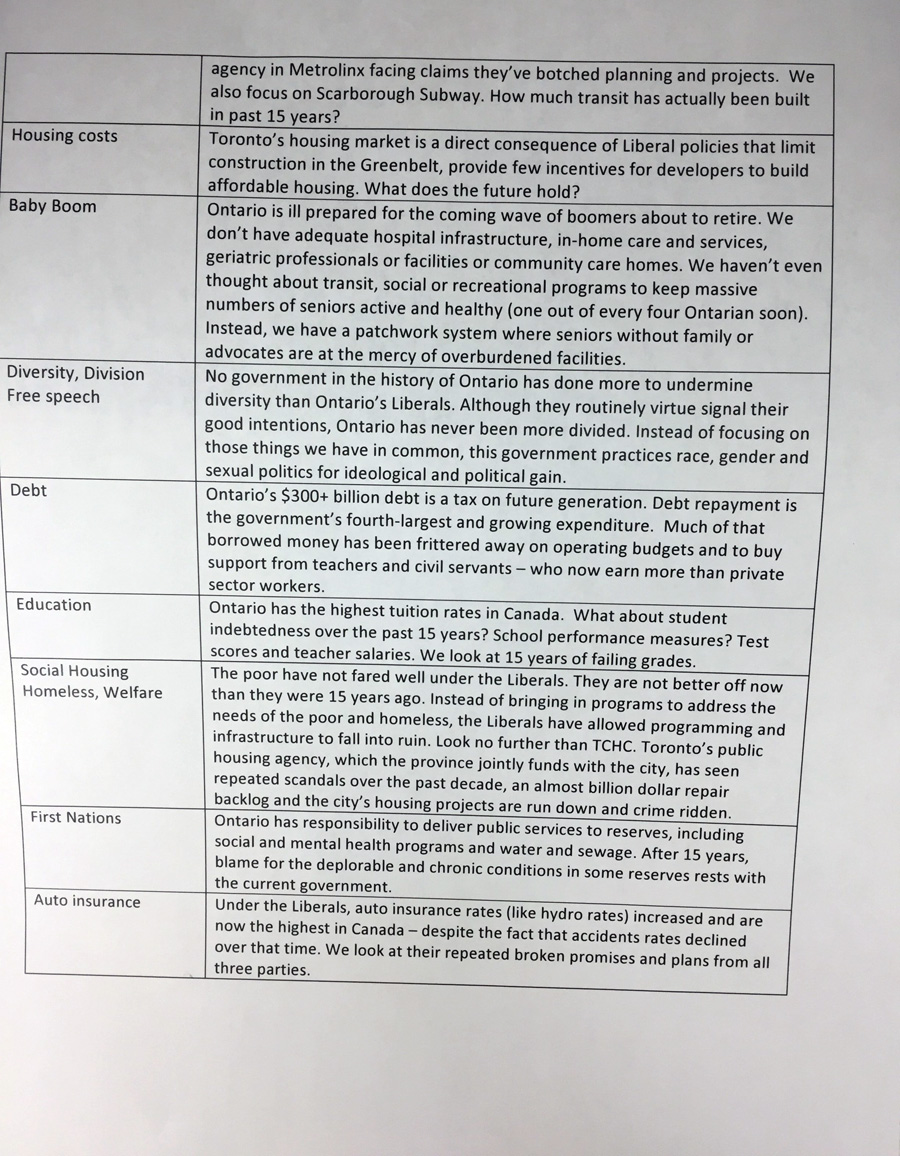 Our editorial focus will key on the following thematic areas:

Issue: Health Care
Story: Hallway medicine. Nursing cuts. Cuts to hospital funding. Complaints from doctors the Liberals are worse than Mike Harris. We work to personalize Ontario’s health care stories, from patients and medical professionals, to highlight Ontario’s failings and need for structural reform, including revamping or eliminating bureaucratic LHINS. Check whether bureaucracy up 50% as some suggest. Major issues include lack of access, wait times, hospital bed cuts, nursing cuts, doctor shortages. We look at the consequences, including premature or accidental death, wait times associated with broken system. Doctors and nurses say the system’s in crisis. We look at what the three parties intend to do about that.

Issue: Hydro
Story: The $9.2 billion fire sale of Hydro One was just one of many blunders that undermined the province’s electricity sector and drove up energy rates. We revisit the government’s failed green energy plan, articular ongoing and future costs, look back at the gas plant scandal and costs and detail how soon after the election rates will rise, and what the 25% rate cut will cost. We look at the high salaries and bonuses paid to hydro execs and dig into the Hydro One purchase of a U.S. coal plant and toxic sludge farm. Does anyone have a realistic plan for hydro?

Issue: Carbon tax
Story: We compare Liberal cap-and-trade with Conservative and NDP plans for carbon pricing. We look at the impact carbon taxes will have on Ontario’s economy, from jobs to grocery and gasoline prices. We review failure of carbon taxes elsewhere, and problematic nature of implementing if the U.S. does not.

Issue: Jobs and Economy
Story: Ontario lost 75,000 manufacturing jobs under the Liberals and more broadly companies are leaving the province not only because of high hydro rates, but increasingly because of growing regulation and labour costs. While jobs have been created in Toronto and Ottawa, virtually none have been created elsewhere in the province. We look at declining business investment. We get business voices into our stories to talk about the future of jobs and Ontario’s economy.

Issue: Minimum Wage
Story: Ontario’s Financial Accountability Office estimated as many as 50,000 people could lose their jobs this year because of the wage hike. In January, 59,300 part-time workers lost their jobs. Declines have flattened out since then. We look at stats as they’re published during the campaign. Meanwhile, a 22.5 per cent cut in Ontario’s business tax from 4.5 per cent to 3.5 per cent won’t offset increased staffing costs and other incentives such as paid sick days and three weeks paid vacation for workers with five years on the job.
We’re also increasingly seeing unintentional consequences, including part-time work for people with disabilities.

Issue: Free for all
Story: Free drugs for under 25s, free tuition, a 25% hydro rate cut… We continue look at the costs and implications of Liberal policy and suggestions, for OHIP+ for example, that the program will cost double what the government claims.

Issue: Green Energy
Story: Ontario’s Liberals have wasted billions on unnecessary wind and solar energy. We look at links between those who benefited and party. We also look at carbon taxes and impact on consumers. Cost of green energy? Corporate welfare? Promised Green jobs?

Issue: Transit
Story: Dalton McGuinty complained bitterly about underfunding for public transit. Fourteen years later, we have a subway to Vaughan, a provincial transit agency in Metrolinx facing claims they’ve botched planning and projects.  We also focus on Scarborough Subway. How much transit has actually been built in past 15 years?

Issue: Housing costs
Story: Toronto’s housing market is a direct consequence of Liberal policies that limit construction in the Greenbelt, provide few incentives for developers to build affordable housing. What does the future hold?

Issue: Baby Boom
Story: Ontario is ill prepared for the coming wave of boomers about to retire. We don’t have adequate hospital infrastructure, in-home care and services, geriatric professionals or families or community care homes. We haven’t even thought about transit, social or recreational programs to keep massive numbers of seniors active and healthy (one out of every four Ontarian soon). Instead, we have a patchwork system where seniors without family or advocates are at the mercy of overburdened facilities.

Issue: Diversity, Division
Free Speech
Story: No government in the history of Ontario has done more to undermine diversity than Ontario’s Liberals. Although they routinely virtue signal their good intentions, Ontario has never been more divided. Instead of focusing on those things we have in common, this government practices race, gender and sexual politics for ideological and political gain.

Issue: Debt
Story: Ontario’s $300+ billion debt is a tax on future generation. Debt repayment is the government’s fourth-largest and growing expenditure.  Much of that borrowed money has been frittered away on operating budgets and to buy support from teachers and civil servants – who now earn more than private sector workers.

Issue: Education
Story: Ontario has the highest tuition rates in Canada. What about student indebtedness over the past 15 years? School performance measures? Test scores and teacher salaries. We look at 15 years of failing grades.

Issue: Social Housing
Homeless, Welfare
Story: The poor have not fared well under the Liberals. They are not better off now than they were 15 years ago. Instead of bringing in programs to address the needs of the poor and homeless, the Liberals have allowed programming and infrastructure to fall into ruin. Look no further than TCHC. Toronto’s public housing agency, which the province jointly funds with the city, has seen repeated scandals over the past decade, an almost billion dollar repair backlog and the city’s housing projects are run down and crime ridden.

Issue: First Nations
Story: Ontario has responsibility to deliver public services to reserves, including social and mental health programs and water and sewage. After 15 years, blame for the deplorable and chronic conditions in some reserves rests with the current government.

Issue: Auto insurance
Story: Under the Liberals, auto insurance rates (like hydro rates) increased and are now the highest in Canada – despite the fact that accidents rates declined over that time. We look at their repeated broken promises and plans from all three parties.

Post updated at 5:22 p.m. EDT to draw particular attention to the mention of “sexual politics.”