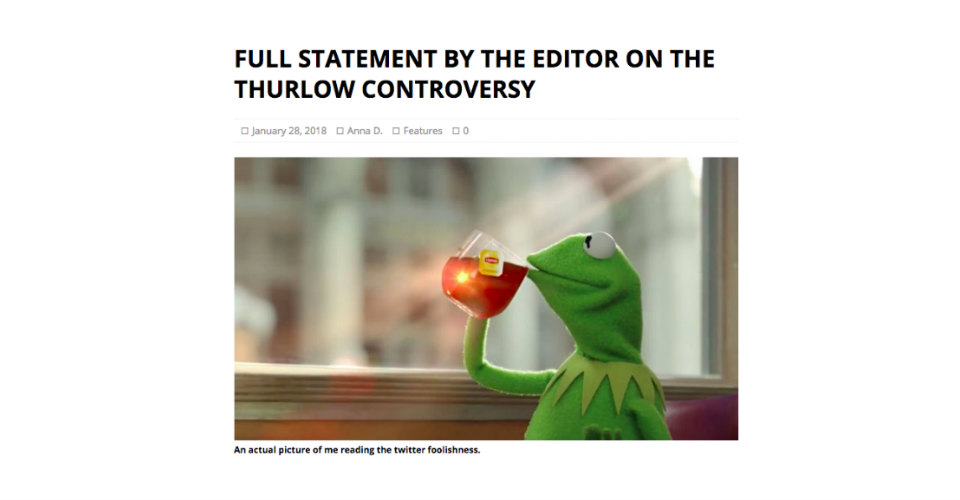 The online student newspaper of the University of New Brunswick’s Saint John campus has been left in a state of upset after its editor-in-chief published an op-ed defending her decision to run an unedited opinion piece from the leader of a white supremacist group.

Anna De Luca, whose last name is no longer listed on The Baron’s site, has been the publication’s editor-in-chief since the start of the month, and on January 25 published two pieces — a Q&A she conducted with Michael Thurlow, the leader of the National Socialist Canadian Labour Revival Party, and a 2000-word anti-Semitic and anti-Indigenous “commentary” penned by Thurlow.

Thurlow’s piece for The Baron came after his group claimed responsibility for a series of racist posters found on the UNB Fredericton campus two weeks ago, and discussed, among other things, his extensive theories about Jewish people and claims that Indigenous people benefitted from residential schools.

The Baron is an independent campus publication, but is funded by student fees. The school collects about $10 per full-time student per term and remits it to The Baron, says David Stonehouse, senior manager of media relations for the school. (The Baron also raises money by selling ads.) UNB posted a statement on its website on January 30, condemning the racist posters and addressing The Baron controversy.

“The internet is full of sensationalized and unserious commentary. In my view, it is a mistake for a student newspaper to publish such views and we will express our concerns to The Baron. I encourage others to make their views known – in a respectful manner,” said the statement from Eddy Campbell, president and vice chancellor of UNB.

After receiving backlash for publishing Thurlow’s apparent hate speech, De Luca wrote an op-ed on January 28 stating that her goal as editor-in-chief was to welcome different kinds of opinions.

“In this age of extreme polarization, I saw gaining captainship of this publication as an opportunity to provide a diverse collection of contributors the ability speak their truth – Whatever that truth may be. I promised myself that I would never censor, never correct or challenge,” De Luca wrote in her statement, which was taken down on Tuesday.

It was the last sentence of that quote that caught the attention of campus newspaper reporters and editors of major publications from across the country.

Many pointed out that exercising editorial judgement — and challenging and questioning statements — is a crucial part of an editor’s job. The paper’s disclaimer at the top of Thurlow’s op-ed described it as “unedited and uncensored commentary.”

“So you are saying editorial roles have to remain static across every single publication?” De Luca writes in an email to CANADALAND, when asked if she knew that editorial judgement was part of her job description. “Ah, no wonder I’m in so much trouble with you folks! Because somewhere I missed in my job description where it told me to be biased and only publish content certain people agreed with.”

De Luca also tells CANADALAND that she is “not groovy” being told what her job should include.

“I see my role as constituting a single thing: publishing. I will help writers develop their thoughts, and offer some minor criticism when asked to do so,” De Luca says. “I want to see articles go up, people debate and engage with them, and that process of deliberation lead to new articles that then repeat the cycle. IE: Dialogue!”

But the “dialogue” from this controversy has caused staff members of The Baron to leave the publication. At least three people have quit because of the incident.

“I originally saw the article where Anna had interviewed him, and read through in shock. It is totally against everything I stand for, and I couldn’t believe that we had used our platform as reporters to present such an awful person’s writing,” says Kenya Plut, who quit The Baron immediately after Thurlow’s piece was published.

“When you google me, the Baron comes up.. I’m really nervous that someone will one day associate me with that, you know?” Plut tells CANADALAND over Facebook Messenger.

Plut says that what Thurlow wrote goes against her personal beliefs and values, and while she enjoyed her time as a reporter for The Baron for two years, she could not be part of an organization that publishes hate speech.

Liam Floyd, the editor-in-chief of The Baron until December 2017, says he’s disturbed that the two articles would be passed off as free speech. Floyd remained a contributor but quit when Thurlow’s op-ed was published.

“To publish the entire interview was a poor decision, as the bigoted opinions said by Thurlow were given a free pass and he faced no scrutiny. It read much more like a personal blog than it did a news report,” he says in a Facebook message.

Jessica Raven, former copy editor for The Baron, says a fellow student alerted her to Thurlow’s “commentary.” Raven had left her position a few days prior to the controversy, for unrelated reasons.

“I was completely horrified. I couldn’t figure out how a publication that I had been proud to work for, for quite a long time, had suddenly become a platform for such hateful language to be displayed,” Raven says in a message.

Raven and Floyd spoke out against publishing Thurlow’s piece on social media before De Luca’s statement went up, and were two of the three people she named in it who had spoken out against the articles.

“My sole intent in posting what I did was to draw attention to the fact that we can’t publish articles such as Thurlow’s on their own; they need to be accompanied with something critical in order to achieve true non-bias,” Raven says.

De Luca asserts that other news sites have no desire to review the complexities of certain issues and that, unlike the story published about the racist posters by sister UNB paper The Brunswickan, what The Baron did was present an unbiased view.

“The Baron is extremely proud to have sparked this important debate on the nature of free speech in media and on university campuses. We can’t wait to continue our important work empowering our student writers to engage with the most significant and controversial issues of the day,” she says.

UPDATE (January 31, 2018, 5:30 p.m. EST): The Baron‘s board of directors has issued a statement apologizing for “the negligence and oversight” involved in publishing both the interview with Thurlow and his op-ed, stating it will neither support nor tolerate “the publication of what is, at the very least, content deemed as hate speech towards any group.”

The board also alludes to, but does not describe, “corrective measures” that it has taken. De Luca’s name, however, has been removed from the masthead, replaced with an interim editor-in-chief, and the two pieces have been taken down.