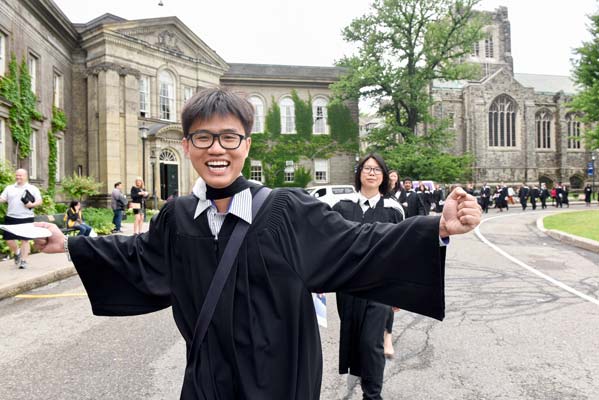 In what world is a top university student having to live in a homeless shelter treated like a success story? Welcome to Canada in 2015.
By Luke Savage
Share

In what world is a top university student having to live in a homeless shelter treated like a success story? Welcome to Canada in 2015.

I first heard of Anh Cao earlier this week, when friends on social media began sharing a news release put out by my alma mater, the University of Toronto.

An academic whiz kid, he won a scholarship worth more than 100K in his native Vietnam and came to Canada to study molecular bio. Thanks, among other things, to sky high international fees of $33,000 a year, he eventually ran out of money and had to live for several months in a homeless shelter before eventually finding a friend’s den to squat in. During his time at U of T he worked at an immunology lab and also did a placement at Sunnybrook Hospital. Cao put in volunteer hours cleaning at a palliative care home and frequently had to rely friends for food.

From where many of us are sitting, this is simply appalling. U of T’s official press release didn’t quite put it this way, of course.

Rather, Cao’s convocation “marked the culmination of an incredible journey both in distance and sacrifices made.” The Toronto Star’s story didn’t differ in style or substance. It follows a familiar arc, celebrating a unique person’s talents, hard work, and eventual triumph over adversity:

“How this impish gifted student from Vietnam overcame economic odds to become a molecular biology whiz, a dazzling researcher and a teaching assistant so talented he now trains other tutorial leaders, speaks to his grit, to Canadian kindness and the fact it can take a village to raise an academic rock star.”

This kind of mushy, press release-ese disguises quite a lot.

Rather than be outraged that a young person of such potential had to endure these conditions to obtain a Bachelors degree, we are asked to rejoice merely because he’s survived the ordeal. That U of T’s stratospheric tuition costs and inadequate support mechanisms were actually the reasons for this ordeal somehow doesn’t enter the picture.

Instead of reflecting on the fact that a top student had to rely on other people’s generosity and live in a homeless shelter, we are invited to celebrate the horrendous conditions of his education and to treat his experience as an affirmative, inspiring one.

And if only Anh Cao’s story were an isolated one.

As an international student, it should be said, Cao had it even worse than a domestic one. Tuition for a domestic undergrad at U of T ranges from $6,000 – $15,000 a year depending on your program and whether you live in residence (that cost has risen by 40% in the last seven years alone). There are at least 300,000 international students in Canada, many of who have paid a small fortune to get here – often tens of thousands before they’ve even boarded for the plane trip over.

Though international students are definitely worse off, it’s not exactly a great time for those working or studying domestically either.

Aside from the tuition fees that never seem to stop rising, the labour market looks very bleak indeed. Unemployment among young workers, at 13%, is higher than the national average. In May of this year, 29% of young people were underemployed. A shocking number of students have to rely on food banks, and half of those considered to be the working poor have a postsecondary degree.

As conditions for students and young workers – even the most educated – worsen, stories like Cao’s are increasingly served up as affirmations of a kind of competitive aspiration we’re all expected to pursue. This narrative, in much the same way as the official version of Cao’s story, doesn’t exactly hide the terrible conditions students and young workers face: high tuition, low wages, a precarious job market.

But instead of encouraging them or anyone else to respond to these conditions critically, young people are increasingly asked to adapt themselves, and their expectations, to the demands of a society which is quite systematically leaving them behind.

Can’t afford skyrocketing tuition fees? Take a McJob on the side and if your education suffers, so be it. Can’t find a job despite investing tens of thousands in a degree? Work for nothing and you’ll have a shot, maybe.

It is in this context that U of T’s official news service earnestly packages an experience like Anh Cao’s as a success story. The subtle implication is that every student might succeed in spite of it all if they just reformed and applied themselves.

Getting angry or (heaven forbid) organized around issues like high tuition isn’t an option.

Young people of my generation don’t just face high tuition, a precarious job market, or universities and employers who treat us more or less like cash cows. We also face a veritable cottage industry of Gen-Y bashing in the op-ed pages of the nation’s newspapers where complacent representatives of our parents’ demographic cohort continue to insist, against all evidence, that we’re just a lazy and entitled rabble.

“I’ve been through some difficult times, but I’m not complaining”, Cao told U of T News. Though I wish him the best of luck, I respectfully disagree with this sentiment.

Instead of resigning themselves to the crumbling of their educations and job prospects, or a society telling them to just suck it up and live with them, students and young people should be complaining.

Luke Savage is a writer who has contributed to places like Jacobin and Maisonneuve magazines. He is the former editor-in-chief of The Varsity, the University of Toronto’s student newspaper. Follow him on Twitter @lukewsavage.