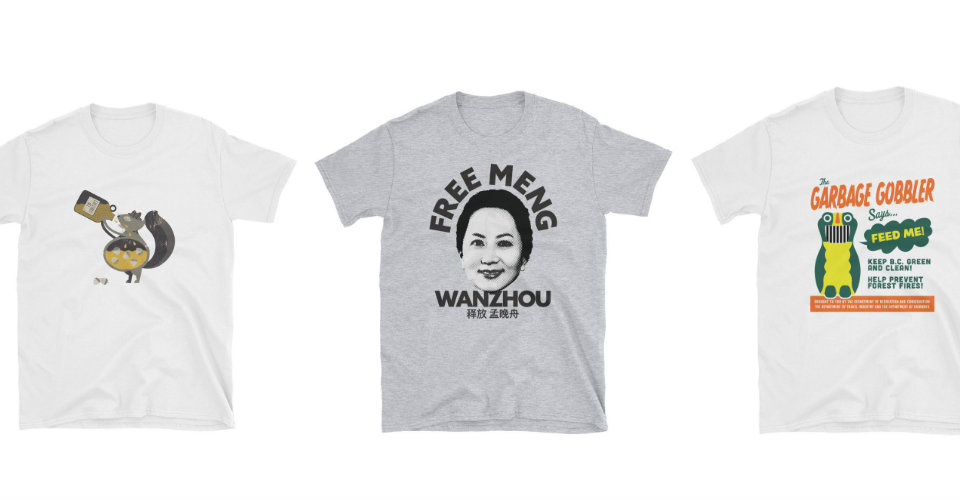 Everything Is Awesome
News Brief By Jonathan Goldsbie
Share

Vancouver Is Awesome is a hyperlocal blog focusing on the city’s lifestyle and culture. It gets about a million visits a month, and its most popular post of 2018 concerned a possible impending snowfall, because, the site explained, “SNOW, OMG!”

Since Thursday morning, they have also been selling t-shirts demanding that the Canadian government “FREE MENG WANZHOU,” the Huawei executive who was arrested in Vancouver on December 1 and is now out on $10-million bail, awaiting possible extradition to the United States on charges of fraud.

“It is widely believed,” claims the site’s sister store, BC Is Awesome, “that Wanzhou is a pawn in a political game being played by Donald Trump’s government.” The store pledges that $1 from each shirt sold will go toward sending her pizza, “like she recently did for media who were camped outside her home.”

We're producing this t-shirt in support of calls for the immediate release of political prisoner #MengWanzhou. $1 of the proceeds of each shirt sold will go to a meal fund, to send Ms Meng pizza at her home. #freemeng #freemengwanzhou #Huawei https://t.co/RsjCijeyIk pic.twitter.com/oiGS3hRTmT

Four and a half hours after the tweet announcing the Meng t-shirt and fundraiser, and upon getting heavily ratioed, the site attempted a partial course correction with the grace of Kang wading into the abortion debate:

By popular demand, we’re also producing this t-shirt in support of calls for the immediate release of political prisoner Michael Kovrig, detained in a heinous retaliatory response by China. $1 from every sale will go to his family. #china #michaelkovrig https://t.co/YxxrYuVESy pic.twitter.com/LMMPpdtmbY

The other 85 items sold by BC Is Awesome depict retro logos, local animal-themed in-jokes, and, at their most political, entreaties to cease clearcutting.

Meng’s arrest has angered the Chinese government, and some in Vancouver’s Chinese community have offered her support, even serving as sureties.

Since her arrest, three Canadians have been detained in China, which some experts in foreign affairs suspect is a form of retaliation, and which Vancouver Is Awesome has now explicitly declared as such. Former Canadian diplomat Michael Kovrig was the first, followed by Michael Spavor and Sarah McIver, given secondary shout-outs on Vancouver Is Awesome’s secondary shirt.

Huawei is the world’s second-largest smartphone maker, but many countries have said it has close ties with the Chinese government and that its equipment could be used for espionage. The U.S. and Australia have banned the company’s products from being used to build out their 5G telecom networks, and have pressured Canada to do the same. Huawei, which advertises on programs like Hockey Night in Canada and Sportsnet Central, denies that its products are used for spying. In addition to being its CFO, Meng is the daughter of the company’s founder.

Last year, Vancouver Is Awesome was acquired by Glacier Media, which owns more than 100 business and community publications across Western Canada.

Vancouver is Awesome didn’t immediately respond to a request for comment, but we will update if they do.

With additional reporting by Jaren Kerr. Also shown above: BC Is Awesome shirts depicting a Drunken Squirrel and the Garbage Gobbler.