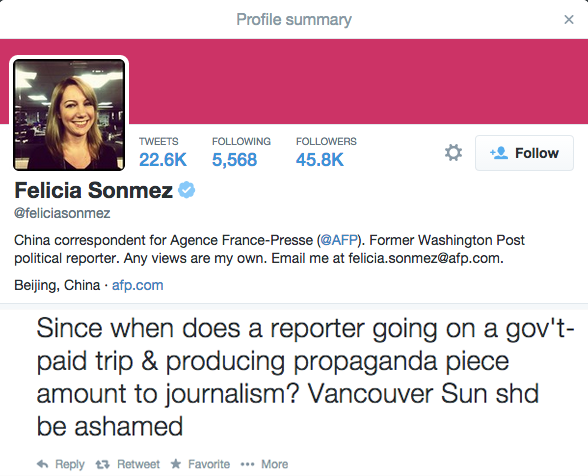 In fact, Chiang wrote two pieces about his recent trip to Tibet- the piece cited by Sonmez, which appeared as a column by Chiang in The Sun’s business section, and this column, which ran in the travel section under the hed “Tourism, government spending boost Tibet’s living standard”.

Both articles describe a thriving Tibet, free from political tension, conflict and oppression. Chiang paints Tibet as a province with a booming economy and “overwhelmingly content” citizens, none of whom are quoted. Chiang praises Tibet’s environmental and cultural protections,”exploding” tourism and religious freedom. The Dalai Lama is described by Chiang’s sources (government officials and government-provided academics) as something of an international celebrity, out of touch with the realities of modern Tibet. Chiang quotes Chinese government figures about “unprecedented” spending by Beijing on Tibet’s modern infrastructure.

Beijing spent money on something else: Chuck Chiang’s journalism. A disclaimer under each article reads:

“Chuck Chiang’s travel inside China, and most of his accommodation in Tibet, was provided by the Chinese government.”

While subsidized expenses are common in the travel sections of many newspapers, including those of Postmedia, which owns the Vancouver Sun, it’s rarely seen in business sections, and never, to CANADALAND’s knowledge, accepted by opinion columnists from the subjects of their editorials. When trips are subsidized for travel journalism, the money typically comes from foreign tourism boards. In this case, the money seems to have come directly from the Chinese government.

Chiang’s columns ran in The Vancouver Sun earlier this summer, on July 28th and August 5th, respectively. But they only caught the attention of AFP China correspondent Felicia Sonmez yesterday, after one was picked up by The Global Times, an English language tabloid published under the auspices of The People’s Daily, the official newspaper of the Chinese government. When Chiang’s piece ran in The Global Times, no disclaimer was included, and the section mentioning the Dalai Lama was removed.

Felicia Sonmez tweeted yesterday about the article’s funding, its inclusion in The Global Times, and then posed the question: “Since when does a reporter going on a government-paid trip & producing propaganda piece amount to journalism? Vancouver Sun should be ashamed”. 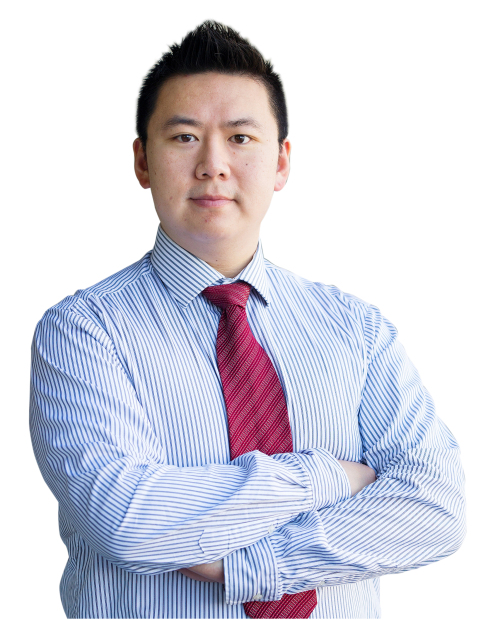 CANADALAND asked Chuck Chiang if he is in fact ashamed, and if he has anything to say in response to Sonmez’s criticism. Here’s his reply:

“We will not be engaging in the debate on social media, but we welcome all opinions through letters to our editors.”

CANADALAND asked Chiang’s editor, Vancouver Sun editor-in-chief Harold Munro, if he is ashamed of the piece, or if it is now The Vancouver Sun’s policy to accept government sponsorship for opinion pieces. Here’s his reply:

“The Vancouver Sun, like other major dailies, occasionally accepts offers of travel on the condition that there are no restrictions placed on questioning by reporters and columnists and stories resulting from such trips always run with a disclosure for our readers. Chuck Chiang asked tough questions about the Dalai Lama and raised issues in his columns such as the violent unrest that plagued Tibet in advance of the 2008 Beijing Olympics. He wrote fairly and accurately on his experiences in Tibet. As it is our policy to fully disclose any assistance with travel that we receive, a tagline flags this at the bottom of the story.”