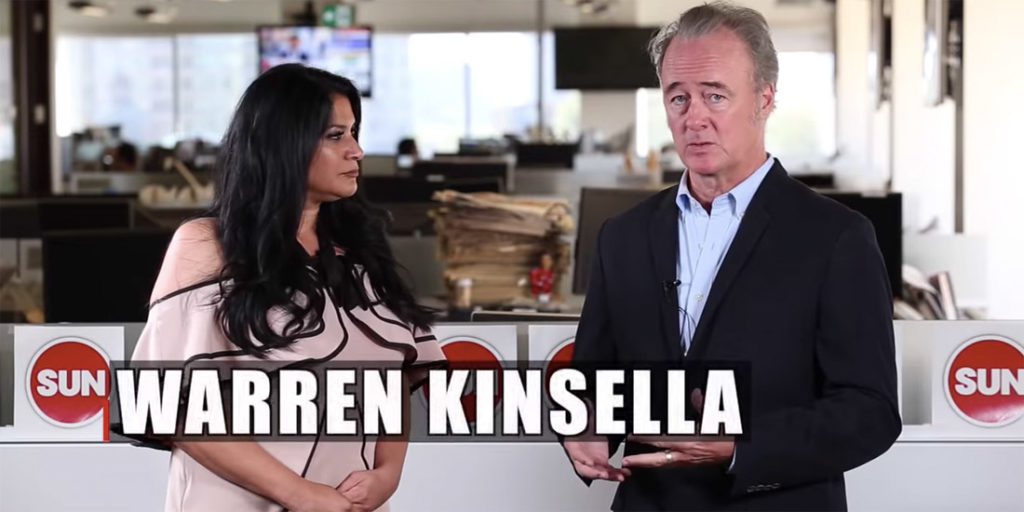 Kinsella, Postmedia, And The Paid Campaign To “Seek And Destroy”

Secondary goal of Project Cactus was to deflect attention from Conservatives' own candidates, says source
Article By Jonathan Goldsbie
Share

At 9:04 a.m. on Wednesday, May 29, an employee of Warren Kinsella’s Daisy Consulting Group sent a message to colleagues in a group chat: “FYI – Warren wants to do the campaign update as soon as he finishes his column for the Sun, so be ready!”

The WhatsApp chat group, known as “🌼 War Room,” had been created a couple of weeks earlier to facilitate collaboration on “Project Cactus,” a Daisy campaign to discredit Maxime Bernier and his People’s Party of Canada (PPC) by placing a focus “on the prejudice and hate” associated with them. According to internal Daisy documents obtained by Canadaland (and previously reported on by The Globe and Mail and CBC), one method to achieve this would be a “public relations, media, and social media awareness campaign that targets Maxime Bernier, the PPC, its members, and supporters.” May 29th would have fallen within the campaign’s “seek and destroy” period.

Later that day, the Toronto Sun published the latest of Kinsella’s regular freelance contributions, in which he took great issue with what he called the “dishonest” efforts of Prime Minister Justin Trudeau to portray Conservative leader Andrew Scheer as racist.

“If Trudeau wants to denounce real bigotry — and he, and all of us, should — he should train his sights on Maxime Bernier’s People’s Party,” Kinsella wrote in the newspaper. “Bernier and his cabal have devolved into the porch-light of Canadian politics, attracting all the bugs and the creepy-crawlies.”

A source with knowledge of Project Cactus says the Conservative Party of Canada (CPC) was the client paying Daisy for the work and that members of the firm were in communication with party representatives. A secondary goal of Project Cactus, the source says, was to deflect attention from the Conservatives’ own problematic candidates, including ones who’ve expressed Islamophobic views.

Both Kinsella and the Conservatives spent the past weekend refusing to confirm or deny the party’s involvement, with Scheer repeatedly telling reporters on Saturday that his party won’t comment on “vendors that we may or may not have.”

This is echoed by party spokesperson Simon Jefferies: “We do not comment on vendors or suppliers we may or may not use.”

My colleague from The Canadian Press tallied up the questions to Scheer today about the mudslinging story — he dodged the question and related questions on that story 23 times.

Project Cactus began in early March and, as of the spring, was intended to run “both leading up to the writ and during the 2019 national campaign.” In a post on his blog on Saturday, Kinsella said, “The work we were doing ended many months ago. It was always going to be disclosed, by law.”

Kinsella started as a Toronto Sun columnist in mid-March and has averaged one and a half pieces a week since, with the most recent being published last Friday. Of his 40 columns for the paper, 21 mention the Conservatives, two mention the PPC, and all but a handful are explicitly critical of Trudeau, the Liberals, and/or their supporters. (He’s also recorded a handful of videos for the Sun.) The two columns that touch on the PPC were the aforementioned May 29th missive suggesting that Trudeau was going after the wrong target by denouncing racism among the CPC instead of the PPC, and another published two weeks later that described Bernier as having gone “full alt-Right” and “thereby consigned himself to the margins of Canadian politics, and the dustbin of history.”

The paper has described Kinsella as part of its “team” providing election coverage, and invited him to participate in its October 8 editorial board meeting with Scheer, where he asked the Conservative leader how, as prime minister, he would handle U.S. President Donald Trump.

Sun management did not respond to questions about whether they were aware of Kinsella doing paid work on behalf of the Conservatives, but a spokesperson for parent company Postmedia says in an email, “Postmedia is unaware of any financial arrangement that Warren Kinsella might have had with a political party while writing a column for the Toronto Sun. If we had been aware of such an arrangement, we would have disclosed that relationship, as is our standard practice.”

Asked whether he made his editors aware of paid work he was doing during the election, Kinsella told Canadaland, “We don’t discuss client matters. However, we are always proud to be associated with efforts to oppose racism and intolerance.”

He did not answer follow-up questions asking for clarity on whether his policy to not discuss client matters extended to discussions with his editors. He does, however, say, “It is deeply ironic that a web site that is the very epitome of bias is making inquiries about bias.”

After deactivating his Twitter and Facebook accounts on Saturday afternoon, Kinsella posted a statement to his blog, writing that he is “proud to oppose bigots like Bernier, paid or not. And the client who wanted to expose and oppose bigotry? They deserve credit, not criticism.”

But in the chat group, a Daisy staffer expressed disappointment that Project Cactus might not hold Conservative supporters to the same standards as those of the PPC.

At the beginning of June, Scheer removed Michael Cooper from the House of Commons Justice Committee after the Conservative MP responded to committee testimony from the president of the Alberta Muslim Public Affairs Council by reading a portion of the Christchurch shooter’s manifesto into the parliamentary record. Some PPC supporters were not happy about Scheer’s action, and discussion in the WhatsApp group turned to how that might be used to go after Bernier’s party.

But, one staffer wrote, “Seeing as CPC members are upset about this temporary removal from a committee as well, I wonder if calling out the PPC on this one doesn’t engender some risk for the client. In an ideal world, both would be called out.”

In August, Postmedia’s Calgary Herald published a message to readers after it was discovered that political columnist Licia Corbella had been an active member of Alberta’s United Conservative Party and voted in its leadership election. The newspaper removed from its website at least a dozen columns she wrote about the party while holding a membership.

Neither Postmedia nor the Sun responded to questions about whether Kinsella would continue as part of the team providing election coverage.

“If you hire Warren, you hire his mouthpiece. You get access to the Toronto Sun by hiring Warren,” says the source with knowledge of Project Cactus. “This is why you hire him.”

We've got this covered. #elxn43 pic.twitter.com/cE3IpDw2hu

It is deeply ironic that a web site that is the very epitome of bias is making inquiries about bias. The first time I encountered you, at Divisional Court, you stated that I emitted a “stench.” How could anyone consider you without malice?

And this: we will always defend our reputation, so you should ask your source if she is prepared to testify on your behalf about falsehoods.

Don’t communicate with me again. Thanks.

[Note: He appears to have been recalling this 2013 tweet from the Divisional Court’s hearing on the appeal of the decision to remove Rob Ford from office for violating Ontario’s Municipal Conflict of Interest Act.]