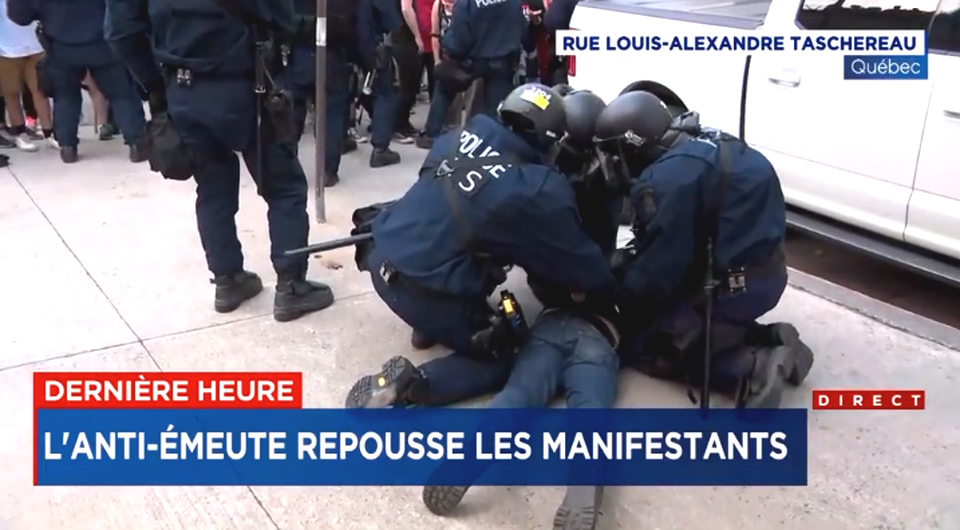 What Journalists Should Keep In Mind Covering Anti-Fascist Protests

The moment Global TV’s camera hit the ground, the August 20 protests in Quebec City became about violence. For too many journalists that afternoon, it was now personal.

The white-supremacist group La Meute organized a rally. Anti-racist protesters organized counter rallies. When the dust settled and the news came out, La Meute was widely reported as being “peaceful” and having “won” the air wars. Anti-racist protesters were either painted as violent or ignored entirely. News outlets chose to feature masked protesters in their photos, and to focus on violence: two or three fireworks shot at police (who responded with tear gas canisters), a scuffle among about 15 people, and a smashed camera. Most of these things happened within a span of 15 minutes.

From about 40 feet away, I watched fewer than 10 people throw chairs and pint glasses at police. They were at the head of a rally of several hundreds of people. Young and masked, they employed Black Bloc tactics against the police, who stood back.

I exchanged looks with Dan Spector, one of the Global reporters covering the rally. We’d never met, but in that moment, our glances said: what the hell? Then he ran towards where the rally was moving, and I stayed put and watched the police. I wasn’t there to cover the rally; I was there to oppose La Meute.

Moments later, the Global crew was in the thick of the action. Journalist Mike Armstrong later admitted that maybe they were too close to it: “I put myself in a dangerous position. If something happens, that’s on me,” he wrote.

The rest of his account is imbued with shock and anger that someone had laid hands on him and his team’s equipment. They were just doing their jobs. How did he become a symbol of what these folks were protesting against?

As I read Armstrong’s account of being shoved and jostled, I immediately thought of my own experiences being shoved, hit, and jostled. I’ve never experienced it covering a protest, as I’m almost never in protests as a neutral observer. But I have experienced it at the hands of police. Once in Toronto and once in Quebec City.

Video shows that Singh was quite aggressively arrested. Compared to Armstrong’s account of what happened to him, Singh experienced more violence at the hands of police than Armstrong did from the masked guys. Neither man should have experienced what they did, but how reporters covered these events was very different: the attack on Armstrong was unequivocally bad but Singh’s arrest was routine, mundane, and even worthy of celebration.

What’s the difference between these men? Sure, race and employment status are at play, but also many journalists see themselves as a protected class of citizen that should necessarily remain free from intimidation or force. They’re telling our stories, after all.

Singh’s arrest was an egregious attack on free expression by the state. He was arrested, thereby forcibly removed from the protest. He was held without charge for an hour, and then released on the other side of town. Nine days later, he was re-arrested in Montreal, transported to Quebec City, and held overnight in a cell to face charges for impersonating Quebec Nordiques star Michel Goulet and obstructing justice (by impersonating Goulet). For the next three weeks, no other charges were laid in connection with the protests. (News broke Tuesday morning that two young men were arrested at their homes.)

Singh’s arrest captured headlines and changed the narrative of the protests in an instant. If the police had arrested him just to take hold of the media narrative, they had a stunning victory. Violence, anarchy, Jaggi Singh, and journalists being attacked formed the bulk of the news coverage of August 20.

The attack on Armstrong was an unjustifiable assault. No one should face violence while doing their job, including journalists. But the implications that Singh’s arrest has for citizens and journalists are much more serious than the implications of the attack on Armstrong. The latter was illegal, and logic follows that there should have been consequences for it, especially if the state protects freedom of the press. And yet Singh was the only one arrested that day.

There is a direct line that can be drawn between state repression of social activists and other freedoms, like expression and a free press. During the 2010 G20 in Toronto, far too many journalists were surprised to find out that their press passes were effectively meaningless.

Their special status means nothing when the state is in full-on repression mode.

Over-policed communities experience limits to their free expression all the time, especially if they are rising up to confront their oppression. Carding, racially-driven spot checks, and the Indian Act all place highly unreasonable conditions on the free movement and free expression of individuals and communities. Tactics such as legislative limits on movement or speech, municipal bylaws, intimidation, and/or harassment are common when the state is looking to quiet down activists, or control and subvert collective organizing.

There exists a conflict between how the world operates and how we believe it should operate. Of course, journalists should be immune from state repression. But in a free and fair democracy, progressive activists should be immune from state repression, too. In reality, neither are. And if you’re covering a sensitive topic — like Vice’s Ben Makuch reporting on Canadians who left Canada to fight with ISIS — you face repression, as he has.

Journalists need to cover these events with more regard for the broad implications and the context in which they unfold. Armstrong himself has every right to express what happened to him in whatever ways he feels he must. But a camera being smashed shouldn’t immediately draw battle lines for all other journalists to follow.

In the coverage of the August 20 protest in Quebec City, the violence became the story. It obscured the fact that nearly a thousand people marched together without incident. That among the crowd were a Liberal MP, the leader of Option Nationale, more than one bishop, and dozens of congregants who had left various churches that morning to come to the rally together. People came from out of town. We outnumbered La Meute.

Journalists shouldn’t lose a critical eye even if one of their own is attacked, and that certainly shouldn’t become the main story of a protest if, on the balance of the news, it’s less significant than the wider circumstances. In a city where six men have been murdered while praying in their mosque, the president of the same mosque has had his car torched at his home, racist flyers are routinely dropped in neighbourhoods surrounding mosques, and where neo-Nazis are doing street patrols, plastering campuses with posters, and opening up their own white-nationalist boxing club, the stakes are way too high for journalists to get distracted, or to make the news about themselves.

Nora Loreto is a writer based in Quebec City. She’s the editor of the Canadian Association of Labour Media and is a proponent of punching Nazis (with her words).

Correction (Sept. 14, 2017, 12:30 p.m. EDT): This piece originally stated that Jaggi Singh was “summoned” to Quebec City to face charges 10 days after the August 20 protest. In fact, police re-arrested Singh in Montreal on August 29 and transported him to Quebec City, where they kept him in custody overnight to face a judge the following day.