Wynne Waters Down own Bill, Benefiting own Libel Suit

A recent change to legislation proposed by Kathleen Wynne's Liberal government to stop frivolous defamation lawsuits will leave anyone currently burdened with one, journalists included, out in the cold. The change comes amidst serious potential conflicts of interest for Wynne and the Ontario Liberal Party, and potentially benefits Wynne's own position as a plaintiff in a pending defamation suit.
News Brief By Sean Craig
Share

A recent change to legislation proposed by Ontario Premier Kathleen Wynne’s Liberal government to stop frivolous defamation lawsuits will leave anyone currently burdened with one out in the cold. The change benefits Wynne’s own position as a plaintiff in a pending defamation suit against Tim Hudak, and comes after lobbying efforts by a corporate plaintiff in another pending defamation suit who donated to the Ontario Liberal party and to its 2014 election campaign led by Wynne.

The government has removed retroactive protection from its Protection of Public Participation Act, which if passed will allow Ontario’s civil courts to dismiss lawsuits that impact a legitimate freedom of expression in the public interest. So-called strategic lawsuits against public participation (SLAPP) – or defamation suits that claim massive damages in order to shut people up – should be legislated against in the province, according to a 2010 provincial advisory panel and everyone who has ever been hit with one.

When Wynne’s then Attorney General John Gerretsen first introduced the proposed legislation in 2013, it sought to protect all expressions in the public interest against SLAPPs, whether or not any related legal proceedings commenced before the bill became law. The new version of the bill, put forward by Wynne’s new Attorney General Madeline Meilleur after the original bill died when an election was called last year, does not afford retroactive protection.

We asked Wynne’s office why the government made the change. They claim two main reasons, “and no others,” informed their decision. A Wynne spokesperson:

1. Fairness to litigants already before the court: The government changed the application provision from the previous legislation on the principle that it was fair to people who started litigation to have recourse to the rules in force at the time the lawsuit was initiated rather than have the rules change in mid-process.  While this was not something that was contemplated prior to the initial introduction, retroactive rule-making (as a matter of procedural fairness) is generally not something that is seen favourably by courts and legislatures.

Except, of course, what isn’t mentioned here is that one of those “litigants already before the court” is Kathleen Wynne. Wynne is currently the plaintiff in a $2 million defamation suit against former Progressive Conservative leader Tim Hudak, PC MPP Lisa MacLeod and the Ontario PC Party.

Before Wynne was the plaintiff in a defamation suit, there didn’t seem to be a problem with retroactive protection. Now that she is, there does. Needless to say, it would be a tad embarassing for the Premier to pass the bill only to have her own legal action potentially subject to it.

Back to Wynne’s spokesperson:

The problem here is that, last year, Kathleen Wynne won a majority government. And, as her office states, the legislation is supported by all parties. Not only is Wynne under no obligation to amend the bill for outside interests, it has broad support in the legislature and its passage faces few obstacles therewithin.

John Gerretsen, the Attorney General who first introduced the legislation and who retired from public office last year, is confused by the change.

“Obviously the bill is weaker than the one we originally introduced and, presumably, it won’t do anything to protect people who have made expressions in the public interest in the past,” he tells CANADALAND. “I have no specific comment as to why the retroactive protection is gone except for it probably shouldn’t be gone.”

And Wynne’s new Attorney General should know better. In 2012, when the Toronto Star published its investigation into animal welfare at Marineland, it was was such a big victory for public interest journalism that Madeleine Meilleur – who was the minister responsible for animal welfare laws at the time – explicitly cited the Star‘s reporting when the government decided to pursue reforms to laws for animals.

The Star is currently subject to a $7 million defamation suit by Marineland. The Georgia Straight, Digital Journal, freelance journalists, animal activists and former Marineland trainers who spoke out to the Star and other media are also subject to defamation suits by the amusement park.

“We do think that it would be better if the legislation did have retroactive effect, making the new motion procedure available to a larger number of affected individuals and groups,” says Cara Faith Zwibel, Director of the Fundamental Freedoms Program at the Canadian Civil Liberties Association.

In 2013, Zwibel co-authored an op-ed with two other experts and Greenpeace Canada Forest Campaigner Shane Moffatt in support of SLAPP legislation in Ontario. Greenpeace Canada is in the midst of a $7-million suit, brought against them in Ontario Superior court by Resolute Forest Products (RFP), a Quebec-based paper and forestry company.

For the past two years, RFP has lobbied the Wynne government hard to can or weaken its proposed SLAPP legislation. According to the Office of the Integrity Commissioner, the company has registered six lobbyists on the Protection of Public Participation Act. The only other two lobbyists registered on the bill are from organizations with ties to the forestry industry, and who share RFP’s interests.

This raises a serious potential conflict of interest concern because RFP gave $9,975 to the Ontario Liberal Party in 2014, while lobbying the government on its SLAPP legislation, and gave an additional $9,975 for its general election campaign that year.

E-mails obtained by Greenpeace through a freedom of information request show that staff from Wynne’s office met with RFP at least twice to discuss the legislation.

Notably, Wynne’s Senior Policy Advisor Kirsten Mercer met with John Valley, an advisor to RFP’s CEO, the evening of April 7, 2014. In an e-mail to him the next morning, Mercer acknowledges discussing the SLAPP legislation and adds “Thanks again for your support last night.” 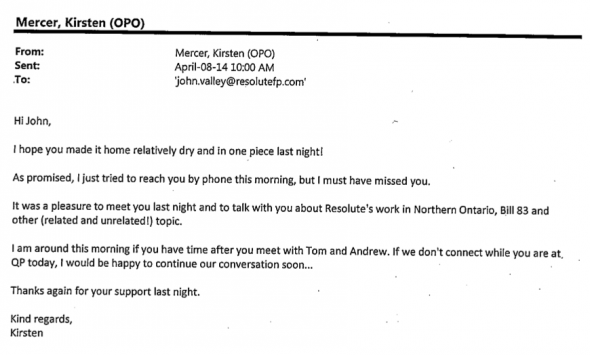 We asked Mercer and Wynne’s office if the $5,000 donation was the “support” Mercer was referring to. They declined to answer the question directly. They did note that policy advisors frequently meet with stakeholders “without any regard to whether they are a donor to any party, a supporter or an opponent.”

In addition to asking what she meant by “support,” we asked Mercer and Wynne’s office what the context of her meeting with Valley was. Where did they meet? What prompted the meeting? They did not answer the questions.

They did, however, note that Premier’s Office staff, as public servants, are subject to ethics guidelines in the Public Service of Ontario Act and the Conflict of Interest Rules for Public Servants. The Premier’s Office says that to suggest a member of its staff has violated any rules would be “patently false.”

We aren’t suggesting Mercer did anything, which is why we asked for the full context of her meeting with John Valley. We have asked the Premier’s Office again if they can explain what Mercer meant by “support” and what the circumstances of the April 7, 2014 meeting were. If they provide a response, we will update our story.

My attitude about this stuff is well known, and I’ve long been the old guy preaching about taking corporate money out of politics. I’m not talking about this situation in particular, but on the whole large money in politics has been a problem. And so are the potential conflicts-of-interest it creates. I raised this with McGuinty, I raised this with Wynne, I would bring it up with the party and with leadership and they’d all roll their eyes and say ‘Oh, there goes John again…’

Kathleen Wynne deserves credit for re-introducing her government’s SLAPP legislation. If passed, the bill will lead to considerable improvements for journalists, especially freelancers, who will have greater license to hold powerful institutions to account without fear of being subject to frivolous, but incredibly expensive, legal claims.

That said, the removal of retroactive protection from the bill only serves plaintiffs with frivolous suits that could be dismissed under the new law. If Wynne is confident in her own pending defamation suit, there’s no reason for her to worry about it being subject to dismissal.

On the other hand, the change to the bill means that many news organizations, journalists and their sources will be left behind by this government for doing nothing but speaking out in the public interest.

One of the central justifications for proposing this law is the argument that defamation suits can be used to prevent people from speaking out.

To that end, we asked Tim Hudak, Lisa MacLeod, the Ontario PCs, the Toronto Star and Travis Lupick of the Georgia Straight for comment about the change to the legislation and about their pending litigations. Hudak, MacLeod, the PCs, and the Star provided a “no comment.” Lupick didn’t respond.