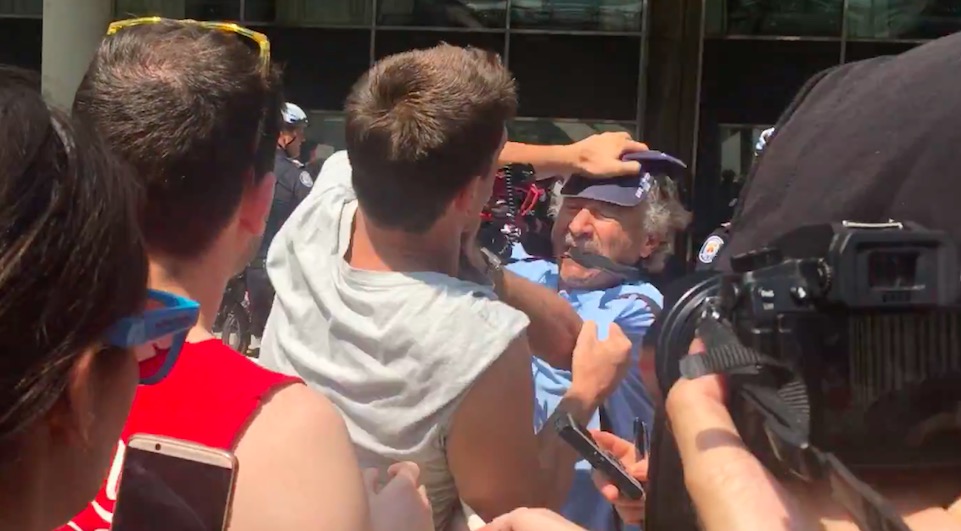 What We Know About The Assault On Sun Photographer Stan Behal

The video has different audio than the Sun‘s version — which appears to have synced Nondo’s footage with sound recorded on one of its journalists’ devices — but is otherwise consistent with what’s previously been shown and described (including the man tossing back Behal’s hat soon after taking it).

The veteran photojournalist suffered a concussion and is currently on medical leave, according to the paper. Police, who have launched an assault investigation, are seeking to identify the man in the grey shirt. (Update, August 19, 2:46 p.m. EDT: Police have now charged a man with assault.)

The incident took place during a standoff between anti-racist/anti-fascist protesters and members of the lone far-right group to turn up that afternoon. The event had originally been planned as a counterdemonstration against a rally by WCAI Canada, whose leader had — among many other things — celebrated the death of Heather Heyer in Charlottesville; for reasons both convoluted and fairly straightforward, his group and most others on the far right pulled out of Saturday’s rally, scheduled for the anniversary.

On Thursday morning, Behal told CBC’s The Current, “I think the intention was to hurt me. I don’t think it was as simple as swiping a hat or being playful.” The program placed the incident within a larger discussion of Donald Trump’s demonization of the press. But another participant in the anti-racist demonstration, who was nearby throughout, disputes the CBC’s framing.

In a letter he shared with CANADALAND, Don Booth wrote to The Current, “Your show today would have sounded much, much different if you had included further information that surrounding demonstrators immediately shamed the ‘hat grabber’ and insisted that he return the hat. It would, of course, [have] been about one person whose actions were immediately condemned and reversed by the other demonstrators. What does this say about Canada’s attitude toward the press?”

On Tuesday, Booth had posted to Facebook an 1100-word account of the incident and its context, in which he wrote, “At one point, the protester in question lunged through the crowd, pushing me and others to the side, and grabbed the photographer’s cap. I thought that was the most childish thing anyone could do, and I yelled at the ‘protester in question’ to ‘give the hat back’ and to ‘grow up.’ I was not alone. Others protesters were just as disgusted with what he had done and told him so. The protester paused briefly and returned the hat. Then the protester stood around looking sheepish.”

He noted that had the police “arrested the protester on the spot, they might well have caused a riot — the anarchists love to hate the police and love to intimidate them.”

But, he also observed, Behal did not appear to be wearing any press credentials (unlike columnist Sue-Ann Levy, also covering the event for the Sun). “I’m sure he knew that he was standing in a highly charged situation. I’m not sure if he knew that there was another photographer, standing next to him, who was not a member of the press but who was clearly with the fascist who had been baiting the demonstrators, anarchists, and taking their pictures. They had similar equipment and were both middle-aged men.”

Behal, however, seemed confident that at least some of the demonstrators were aware of his affiliation, telling the CBC, “Once they determined that I was with Sun Media, the temperature changed.”

Another video shot by Nondo shows demonstrators confronting freelance photographer Stacey Newman, who wrote on Instagram that “some of the protesters started accusing media of being ‘fascists’ along with the Toronto Police Service members. I was closed in and surrounded while masked protesters yelled at me about two feet from my face, calling ‘shame’ and ‘fake news.’ I didn’t yell back, nor would I. I told them when asked that I was doing my work and not there for any other purpose. Then I ignored them and just did my work.”

This was the photo I got when one of them tried to grab my camera. #thatwasfun #photojournalism #aggression pic.twitter.com/7DmFTTUfW7

The assault on Behal has been condemned by Canadian Journalists for Free Expression, Reporters without Borders, and Unifor Local 87-M, for which he serves as the Sun‘s unit chair. Behal was previously attacked in 2001 by Pat Quinn, the coach of the Toronto Maple Leafs, who later apologized and was fined $10,000 by the NHL.