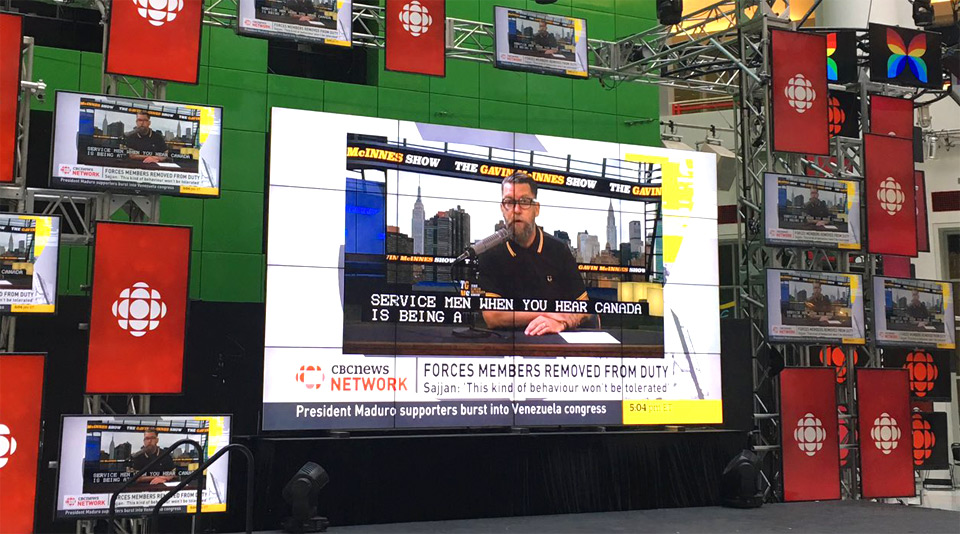 The CBC is admitting that it “erred” in its presentation of an interview with Gavin McInnes on Wednesday and that it failed to adequately challenge the Rebel Media personality and Proud Boys founder on his views.

McInnes had been invited on Power & Politics, CBC News Network’s flagship political show, to talk about the Proud Boys’ disruption of a Mi’kmaq ceremony in Halifax on Canada Day.

“We will be addressing this issue on today’s program,” Chuck Thompson, the head of public affairs for CBC English Services, tells CANADALAND in an email.

“While the intention was to provide insight and context about the group, we erred in not providing details of Mr. McInnes’s published anti-Jewish sentiments nor did we adequately challenge him on some of his and the Proud Boys’ controversial views.”

Thompson continues, “The show did have an expert on immediately following Mr. McInnes’s appearance who challenged what the group stands for, but a more comprehensive response would have included an Indigenous representative to critique Mr. McInnes’s views.”

McInnes is an experienced media personality who can easily overwhelm any journalist not equipped to challenge his rapid-fire spin. Hannah Thibedeau, filling in as the host of Power & Politics, seemed generally taken aback by McInnes’s comments and unprepared to challenge him on both his alternative historical “facts” about the Mi’kmaq people and his whitewashing of the Proud Boys organization and membership.

McInnes used the interview to defend the actions of his group’s members and claim that the Mi’kmaq were murderers and that the bounty on their scalps was justified — but also that it ultimately didn’t matter because the bounty was never collected. None of that is true.

Mi’kmaq Elder Dr. Daniel N. Paul, a member of the Order of Nova Scotia and Order of Canada, has written about the Scalp Proclamation of 1749. According to his research, the Mi’kmaq also never voluntarily ceded their land to English expansion. On his blog, he quotes University of East Anglia professor Geoffrey Plank: “Everyone involved understood the conflict to be a race war . . . to achieve this goal of segregation . . . the governor began offering bounties for the scalps of Micmac men, women, and children. The aim of this program was to eliminate the Micmac population on the peninsula of Nova Scotia, by death or forced emigration.”

Many scalps were collected.

The Canada Day ceremony was held near the statue of Edward Cornwallis, the governor of Nova Scotia who issued the 1749 bounty. An Indigenous woman from B.C. was cutting off her hair as a demonstration against the intended elimination of the Mi’kmaq people when a group of five young men carrying a Canadian Red Ensign flag interrupted the ceremony. As reported by CTV News, one of the men said, “This was Mi’kmaq territory. This is now Canada. This is Halifax, Nova Scotia. This is a British colony.”

The five men are members of the Canadian Armed Forces, and have since been removed from active duty and may face expulsion.

McInnes has faced criticism for anti-Semitic rants, including a Rebel video called “10 Things I Hate About Jews,” which he claims is satire. The Proud Boys are criticized for being racist and physically assaulting demonstrators on the behalf of alt-right organizations — acts that they claim are self-defense against “Antifa.”

Seriously? I am writing to the CBC Ombudsman now. I hope others will join me in protesting this outrageous decision.

you did a LIVE INTERVIEW with a fascist white nationalist, and you let him tell your audience we are murderous savages who need killing.

Why is CBC giving airtime to guy behind Rebel's "10 Things I hate about Jews" …to defend a group that also hates First Nations? Amazing

really? It's bad enough no Mi'kmaw commentators, but all white show plus u give white supremacists airtime? Smarten up! #racismkills #MMIWG

you sat there and let someone say the bounty on scalps of living human beings was justified, and then you let him sell it as self defense.

The Proud Boys take their name from the song “Proud of Your Boy” that was cut from the movie Aladdin but restored for the musical stage adaptation.

The group exists to shock and offend, to promote “Western Chauvinism” (the belief that the West is the best), to prop up alt-right, alt-light, and anti-Muslim groups, and to fight anti-fascist demonstrators.

While they claim not to be white supremacists — indeed, their membership is more diverse than you might expect — the superiority of men and of white, Western culture are things that their members really believe. Leading up to Canada Day, there was activity on the Proud Boys’ Facebook pages critical and dismissive of anti-colonization demonstrations planned for the date.

One of their Canadian Facebook groups recently found it necessary to purge seven members after posting that white nationalists aren’t welcome. Early Wednesday, they named Cornwallis the “Proud Boy of the Month.”

Hannah Thibedeau made the following statement at the start of Thursday’s Power & Politics:

We want to begin today’s show with an acknowledgement:

We made mistakes in our interview yesterday with the co-founder of the group Proud Boys, Gavin McInnes. We wanted to learn more about that group, after some of its members interrupted an Indigenous protest on Canada Day in Halifax. But ahead of that conversation, we failed to inform you of some anti-Jewish sentiments Mr. McInnes has expressed in the past.

We could have also challenged him more on his controversial views. And although we heard from an academic immediately following the interview to get an opposing perspective on the group, we also could have followed up that interview with an Indigenous voice.

We’re going to do so now.

She then brought on Katherine Hensel — introduced as “a lawyer and member of the Secwepemc nation, who’s spoken and written about hate crimes against Indigenous people” — to discuss the Halifax incident and McInnes’s comments, and to put both in context.