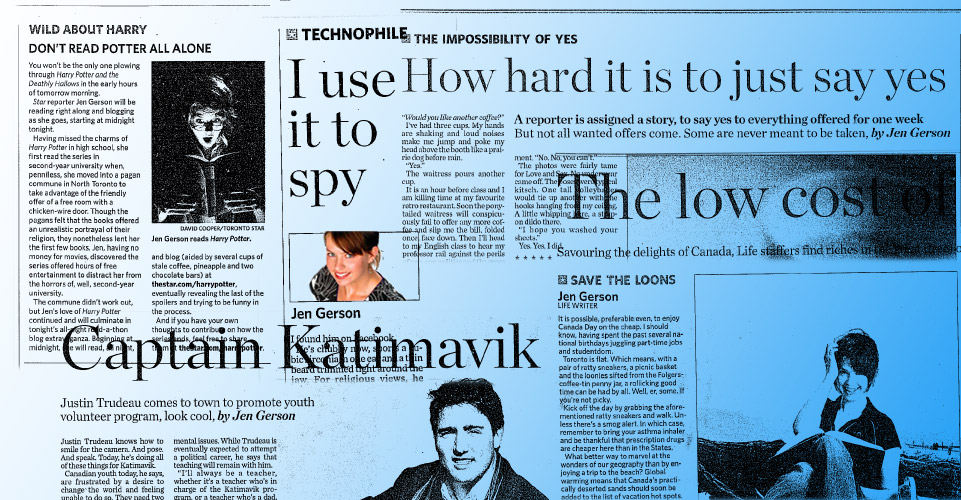 I fear the famed program ruined as many potential talents as it helped create.
Opinion By Jen Gerson
Share

Just ahead of former publisher John Honderich‘s latest propaganda effort to push the federal government to hand over cash to dying newspapers, the Toronto Star decided to whack its internship program. This is, I suppose, when young journalists across the country are expected to get in line and lament the loss of such an important and venerable institution — all the better to unwittingly put pressure on Heritage Minister Mélanie Joly.

It’s true that the Star‘s internship program was prestigious, well-paid, highly competitive, and produced many of this country’s most famous and talented young journalists. Yet, as an alumna, I can’t quite bring myself to wax nostalgic about its demise. Because while the Toronto Star‘s internship does, indeed, appear on many high-profile CVs, it was also notoriously vicious. I gained incredible experience and clippings at that place, and made friends there who have stayed with me to this day. But getting a Star internship was a little like going to war; it offered camaraderie and a sense of purpose at a terrible price.

In my time there in the mid-aughts, the whole program felt like a cage match. Every few months, a fresh crop of eager and disposable young talent was hand-selected to fill the city section in a newsroom that was dysfunctional and toxic. Another alum described it on social media recently as the Canadian journalistic equivalent of The Hunger Games. It’s true that this program gave many good people a foot in the door; it also gave others complexes and neuroses. In the grand tally, I fear it ruined as many potential talents as it helped create.

I can provide an amusing anecdote that I think was illustrative of the broader culture. I began at the Star as a radio roomer, or “boxer.” Part of that job involved watching the wires for major news stories while everyone else was asleep. If something big broke, it would be our job to wake up the bosses. On my shift, a cargo plane carrying lobster crashed in Halifax, killing seven; having been recently chastised for being too trigger-happy on the overnight shift, I decided the story could wait until early morning.

At 6 a.m., I got a call from the notorious managing editor, who berated me at length for my stupidity and incompetence. I was only a few weeks into the job. But this, apparently, was something of an initiation ritual for radio roomers. I apologized profusely, and a kindly assignment editor tried to calm me down when he came in. Don’t take it personally, he said. That’s just the way it was.

And that was the way it was. Getting berated and bullied sometimes seemed like a core part of the journalistic training the Toronto Star provided. Washouts just couldn’t hack it. We were the best, after all. Right?

After I left, I discovered, to my delight, that that culture was not normal. This industry is filled with stellar, if struggling, newsrooms staffed with wonderful editors who try to coax the best out of their reporters without breaking them.

Many former interns have nothing but good things to report about the program, and I don’t want to undermine them. But the experience was far from universally positive. There were many wonderful editors at the Star, of course, and wonderful reporters, too. There were also bad ones. But I hope everyone can forgive me for saying that I think the death of this program is not such a terrible thing, even as I acknowledge the advantages it offered to me. The future of journalism is not going to come from the Toronto Star internship program; it’s not going to emerge from the skills and habits of culture and mind that led to the current state of failure and collapse. We can do better.

The Star, I believe, likely cut this internship program to make a point. Where will young journalists go, if there are no paths for them to learn this vitally important craft? Yet few young journalists are calling on the government for a newspaper bailout — those demands come from established players who’ve been unable or unwilling to adapt.

Other writers, more eloquent than I, have already argued why government funding for newspapers is such a terrible and doomed idea. I can add only this: I have spent more than 10 years in this industry waiting for the bullet. Waiting is far worse than the execution. The worst thing the government could do is to prolong the inevitable. For journalism to thrive in this country, we need start-up capital, space, and talent — not internship programs run by the sort of people who bet the farm on an iPad app.

There will always be avenues into journalism. We don’t yet know where new ones will come from, but the talented and the enterprising will find their own ways. The journalists of the future no longer need the path cleared for us by the likes of John Honderich.

Jen Gerson is a freelance journalist based in Calgary and co-host of CANADALAND’s OPPO podcast.