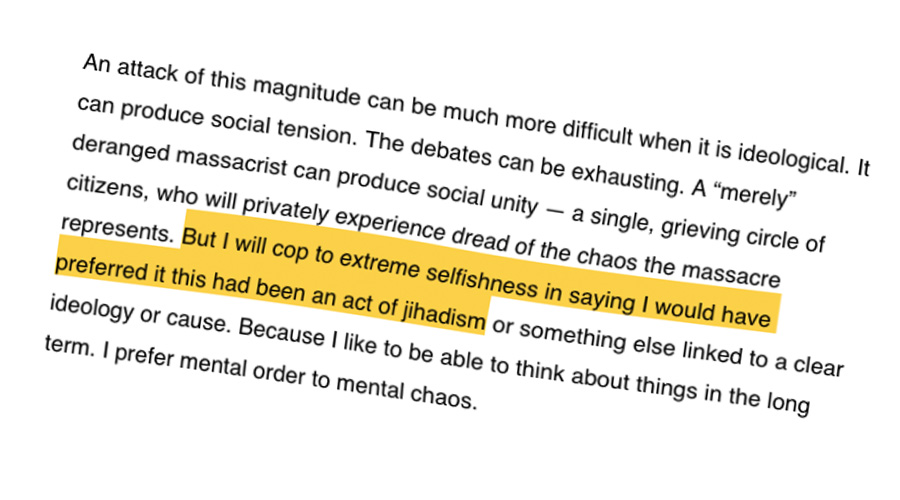 In the aftermath of the Toronto van attack, some mainstream media commentary has overlapped with themes propagated by far-right platforms
Opinion By Steven Zhou
Share

Several mainstream Canadian columnists have pointed out how the van rampage that killed 10 people along Toronto’s Yonge Street on Monday resembled recent vehicle attacks by Muslim terrorists in cities like Nice and London. But while conceding that the driver’s true motives were unclear, these writers liberally couched their interpretations of the rampage in bold and thorough discussions of “jihadist” terror.

Raising the idea of Muslim terrorism as potentially having some relation to the van attack is understandable in itself, as the 2.2 kilometres of destruction did physically resemble numerous cases of ISIS-inspired terror. But the way in which these commentators have gone about discussing what happened has centred on mini-histories of Muslim terrorist incidents, some of which didn’t even involve vehicles.

Though these columnists haven’t specifically cited “Islamic terrorism” as a primary motivator for what happened on Monday, the structure of their arguments betrayed a noticeable urge to do so. Such an approach — one that ventures outside the bounds of journalistic responsibility and common sense — helps align these commentators’ perspectives with those of far-right or alt-right Islamophobes, who have no problem attributing the driver’s motives to ISIS-esque influence or ideology. To suggest such a connection in the absence of real evidence helps perpetuate far-right, anti-Muslim conspiracies, while displaying a callous indifference to the facts. That these musings have not garnered more criticism from the wider media sphere is cause for concern.

For instance, the National Post’s Barbara Kay wrote that “the weaponized ‘van’ has become a meme for Islamist terrorism,” noting how Muslim terrorists have used vans since the 1993 attack on New York’s World Trade Center. “If the motive turns out to be different this time,” Kay wrote, “nobody deserves to be chastised for having instinctively assumed, when the news broke, that the Toronto massacre was related to religion.”

By “religion,” she meant Islam.

“Pattern leads to prediction,” she wrote, adding that it’s not “Islamophobia” to speculate about what happened by emphasizing Muslim terrorists’ proven infatuation with car bombs and rammings. Never mind that the driver, an out-of-work 25-year-old man named Alek Minassian, appears to have made reference to the hyper-misogynistic community of women-hating “incels” and praised the sexually frustrated (and non-Muslim) mass murderer Elliot Rodger.

Kay even confessed to hoping that the driver would be a Muslim terrorist because, according to her, Muslim violence represents a coherent ideology or “mental order,” and thus can be more easily fought. Everything else — say, white nationalism — is “mental chaos” and can’t be pinned down ideologically.

Rosie DiManno of the Star decried officials’ reluctance to use the term “terrorism” as a descriptor for what happened, knowing full well that the term’s common, contemporary usage is linked to incidents with political (often connotatively “jihadist”) motivations. Canadians, according to her, were “naive” to think their country immune, even though the Quebec City mosque massacre, mentioned later in her piece, left many Muslims across Canada anything but naive.

She recalled similar incidents in “Manchester, in Nice, in Paris, in Orlando, in London, in Madrid, in Toulouse, in Barcelona, in Istanbul, in Berlin, in Stockholm, in Boston” — all cities that have experienced some form of Muslim terrorism in recent years (not always with weaponized vehicles) as primary examples, before mentioning a few attacks perpetrated by non-Muslims. Indeed, both DiManno and Kay made minor nods to non-Muslim attacks to “balance” their emphasis on possible “jihadist” links to the Toronto attack.

But doing so amounts to an automatic discrediting of their commentaries’ focus on Muslim terrorism, because neither column says all that much about the West’s surging far-right violence. Indeed, neither contextualizes the Toronto attack within a history of just vehicle-related incidents, which automatically extends the category of discussion to terrorism events more broadly. And if it’s terrorism in general that serves as the overall backdrop for their analyses, then an emphasis on Muslims or Islam makes even less sense.

Both columnists seem to have forgotten the death of Heather Heyer, killed in last year’s white nationalist “Unite the Right” demonstration by a man who drove his car into a crowd of counter-protestors. Far-right violence has risen as a major security concern for Canada, and any newsperson intent on discussing Toronto’s attack in light of political terrorism in general should make equal mention of it and not focus mainly on Muslim terrorism.

Jumping the gun to directly or indirectly attribute incidents of mass murder to “Islamists” without sufficient evidence/facts has long been a staple of the far right. On Twitter, Toronto Sun commentators Sue-Ann Levy and Candice Malcolm both made reference to the event as connected to Muslim terrorism (though both also later attempted to walk back their tweets). Malcolm ranted for 10 minutes about how the rampage bore the hallmarks of ISIS.

White supremacist Faith Goldy cited CBC reporter Natasha Fatah’s wildly irresponsible paraphrase of an eye-witness who described the driver as “Middle Eastern”-looking before anything was known about his identity. It doesn’t seem that Fatah was on the scene to conduct interviews with the person who offered that detail. Rather, she likely live-tweeted an interview by Toronto news station CP24 with an eyewitness named Dave Leonard, which happened at 2:36 p.m. on Monday. The time stamp for Fatah’s tweet was also 2:36.

Though Leonard did refer to the driver as possibly looking “Middle Eastern-ish,” he qualified the description by saying that he was unsure and that he “can’t confirm or deny” whether his own observation was correct. But Fatah, apparently relying on an interview conducted by another news outlet, chose to run with this detail, firing off her tweet in a way that left it open to being read as if she or her CBC colleagues had interviewed Leonard. This, along with unsubstantiated speculation of the driver’s race/ethnicity, amounted to an apparent disregard for journalistic standards.

Fatah’s tweet was followed up by a short memo from the CBC’s senior director of daily news and bureaus to his staff to be more careful with social media. It made no mention of Fatah’s name or tweet.

All this prompts the question of how much respected news outlets like the CBC or Star can stomach suppositions by their staff that approximate similar speculation by the Islamophobic far right. What hangs in the balance at a time like this is the vilification of a community in Canada that has long contended with its fair share of alt-right attacks and unfair portrayals.

Coverage of Monday’s attack by most Canadian outlets has been fair-minded and sober — careful not to jump to conclusions while searching out evidence of motive. But whether Canada’s mainstream media institutions are willing to publicly call out departures from responsible journalism by members of their own staffs remains unclear at best.

Steven Zhou is a Toronto-based journalist and writer focusing on national security and extremism. His work can be found in the LA Review of Books, CBC News online, The Globe and Mail, and BuzzFeed Canada, among other outlets. He is an associate editor at The Islamic Monthly.