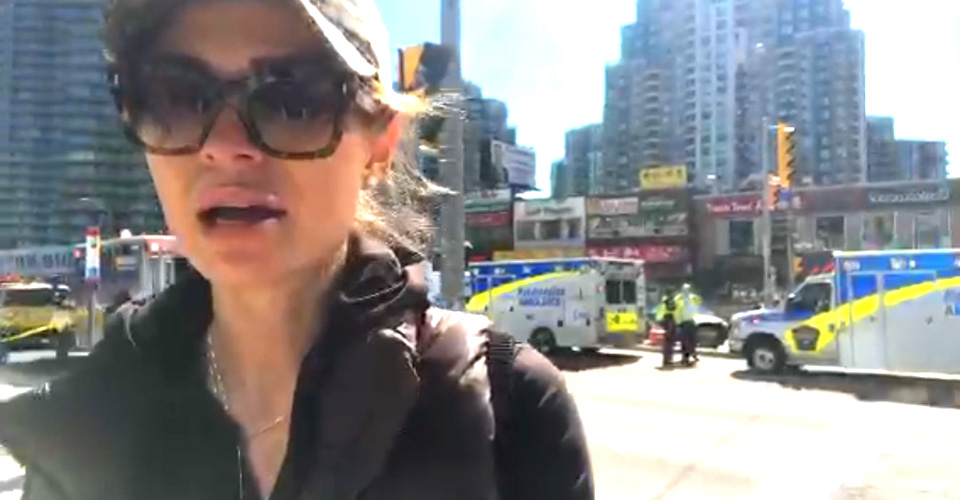 “Contrary to what I heard earlier,” Leonard said, in apparent reference to a previous CP24 interviewee who had described the suspect as white, “it appeared the man to me to be a Middle Eastern-ish man. But again, I’m not sure that’s what I immediately thought.”

Then he hedged further: “But I can’t confirm or deny whether my observation is correct.”

Fatah’s tweet garnered more than 700 retweets over the next 75 minutes, and another 700 since. (She did not respond to CANADALAND’s requests to confirm whether CP24 was the channel she was live-tweeting. A CBC spokesperson also declined to clarify whether she had officially been on duty Monday.)

Just under three hours later, the suspect was identified as 25-year-old Alek Minassian, a man whose former high school and college classmates told the Globe had “no known religious or political affiliations or strong views on anything” (though a post on his Facebook page later appeared to connect him to a violently misogynist online subculture).

But Fatah’s tweet appeared to be all that was necessary for many of the usual figures across both the mainstream and fringe media to seize on an implicit narrative of Islamic terrorism, one they had already seemed eager to embrace. Witnesses continued to offer conflicting physical descriptions of the suspect — including in a second tweeted by Fatah (“Another eye witness to the Yonge and Sheppard incident describes van’s driver as white…”) that did not travel nearly as far.

Both tweets still up. The “Middle eastern” quote tweet has gone from 700ish RTs to nearly 1500. The “white” quote climbed to 90.

One of the first to pick up on Fatah’s tweet, not surprisingly, was her father, Sun columnist Tarek Fatah, who is, to put it mildly, a severe critic of Islam:

The Toronto rented van that was driven by a "wide-eyed" "angry" man identified by a witness as a "middle-eastern" man who intentionally ran over pedestrians on the sidewalk plowing through people "with a stroller flying through the air." pic.twitter.com/1t3rh9Ehra

This is as far as PM @JustinTrudeau, Ontario Premier @Kathleen_Wynne and Toronto Mayor @JohnTory are willing to do in response to the #TorontoTerror attack. pic.twitter.com/21vvF35qWV

He continued to push the “Middle Eastern” angle even after Minassian’s surname — likely Armenian in origin — was reported:

Why should we hear the name of the Toronto terrorist via @CBSNews and not @CBCNews or @TorontoPolice? If the killer's name is 'Alek Minassian', then he could be of Armenian ancestry from Iran or Lebanon. https://t.co/MP2rQKffRh

Candice Malcolm, another Sun columnist with an Islam fixation, also quickly hopped on board with a tweet that has since been deleted: 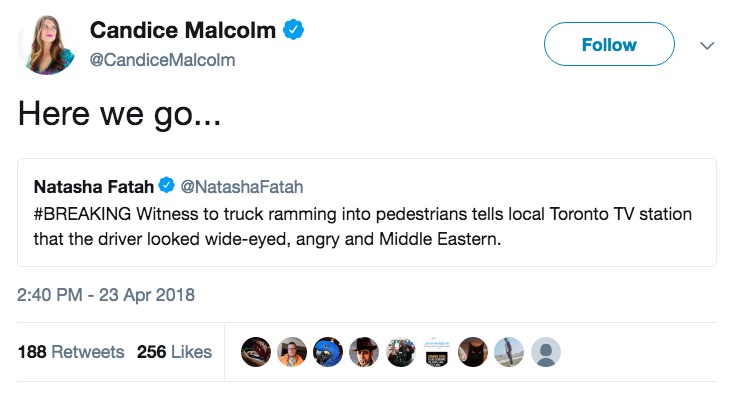 (After this post was published, Malcolm — who on Tuesday morning recorded a video to emphasize that, in terms of methods, it was “very clear this attack was inspired by ISIS” — got in touch to say that she “deleted the tweet because it was being misconstrued by leftist activists like yourself.” Her comment, she says, actually “referred to the unfolding of the identity of the attacker, and the inevitable discussion about motive, whether this was terrorism, and the politicalization by lowbrow, low-circulation journalists like yourself, that inevitably comes after these types of horrific, deadly attacks.”)

Former Rebel Media personality Faith Goldy, one of Canada’s most prominent white nationalists, ran with the same information tweeted by Natasha Fatah, taking the narrative into the alt-right sphere:

Goldy would soon travel to the scene of the attack, broadcasting footage of orange-blanketed bodies lying on the street to her viewers on Periscope. She attended a 4:45 p.m. media briefing by police and city officials — and because they didn’t take questions following their statements, Goldy trailed them to ask, “Can we be told anything at all about the suspect? Is he a Canadian citizen? Do we know if the suspect was from the Middle East?”

Faith Goldy just walked past me shooting video of herself calling this a terrorist attack so I’m glad no one is jumping to conclusions.

Laura Loomer, another alt-right Rebel alum, whose racist attempts to “cover” a vehicle attack in New York last fall got her banned by Uber and Lyft (and eventually cost her her blue checkmark) echoed the “Middle Eastern” line 37 minutes after Fatah’s tweet:

The man who rammed a van into pedestrians in #Toronto today is being described by witnesses as "Middle Eastern".

Before 4:00, Breitbart had a story featuring Fatah’s tweets, quoting them in the (since-updated) headline: 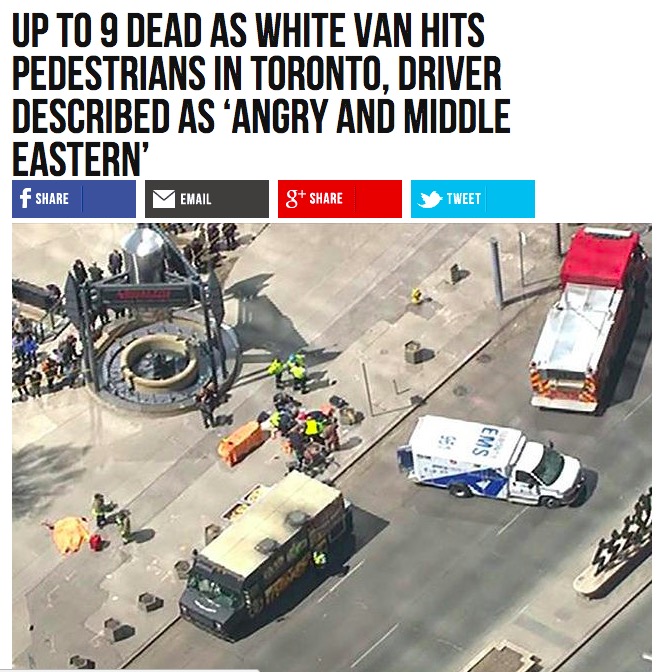 Sun editor/columnist Anthony Furey admonished people who were suggesting that it not yet be labelled a terrorist attack:

Please stop telling angry Torontonians to not call this assault on our great city a terror attack. Yes, there are still facts unknown, but this vehicular ramming fits the bill of what terror groups repeatedly called for in Canada. And people are rightfully mad.

And then it made its way around to Infowars, which discussed the attack on yesterday’s episode. Editor-at-large Paul Joseph Watson, a Brit with 848,000 followers, retweeted both Natasha and Tarek Fatah, and took a break from an afternoon musing about Kanye West to add his own thoughts:

9 dead in Toronto, authorities confirm it was a terrorist attack.

A jihadist has just killed 9 people and the Mayor is already out virtue signalling. https://t.co/sw2lJv9aEz

Yet again proof our mayor has no spine. https://t.co/uIrh2OdfoR

The following morning, Brodie Fenlon, CBC News’ senior director of daily news and bureaus, sent this memo to his staff:

In light of the fast-moving story on the Toronto van attack, a quick reminder about our [Journalistic Standards and Practices] obligations around the use of all social media:

When using social media as an information-gathering tool, we apply the same standards as those for any other source of newsgathering.

We bring these principles and values to bear in our personal use of social media as well.