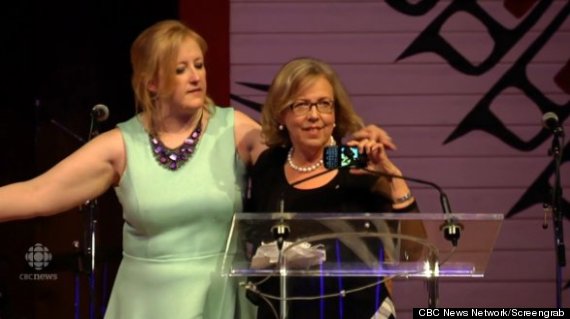 For Evan Solomon, Elizabeth May’s Speech was a Democratic Crisis

For some reason, Elizabeth May's drunken press gallery speech was treated as the most important story in the country. To Evan Solomon, our whole democracy was in crisis.
News Brief By Dale Smith
Share

In the aftermath of her rambling and off-the-rails speech at the Press Gallery Dinner, Green Party leader Elizabeth May embarked on a Monday mea culpa tour of the various media outlets to try and explain herself, and to offer apologies all around for what transpired. Not that any of it was actually scandalous — mostly rambling, but a bit profane in places, but nothing that should cause the level of consternation that it seems to have resulted.

Despite appearing on all of the major networks in the morning, May nevertheless appeared again on the afternoon panel shows where she got to repeat, once again, her lengthy apologies for not having slept enough, flu medication, wine with dinner, and for trying to be edgy, playing against type (type of course being the self-proclaimed “Miss Goody-Two-Shoes of Parliament”) and falling flat on her face. She was not the first leader to have a bad speech at the Gallery Dinner, and we are pretty sure that she won’t be the last.

For some reason, this was treated as the most important political story in the country. Much of it was framed as whether her behaviour was appropriate for someone running to be prime minister, and yet social media was filled with right-wing trolls howling that the media were somehow either “suppressing” this footage (they weren’t — CBC News Network ran clips and had discussion on their Sunday Scrum panel), or that said media were also giving May “a pass,” which again is hard to fathom considering that it wasn’t that big of a deal. She said “fucking”? Oh no! Let’s clutch our pearls!

When it came to the panel shows, Don Martin played it fairly straight on CTV’s Power Play — concerned face, asking the obvious questions of May: was she intoxicated at the time, and would the speech hurt her? The segment ran a little over five minutes, and his “strategists” gave it a couple of minutes later in the show, but then it was over and done with.

On Power & Politics, however, Evan Solomon decided to go all-out in treating this like some kind of a democratic crisis. On a twelve-minute segment, it wasn’t just an expression of concern on his face — it was his “I’m being a serious journalist” face and tone of voice. He hectored May, continually interrupting and repeating himself while putting on a tough persona. Pretty much the same persona he used to give a “tough” interview to the Quebec Winter Carnival’s Bonhomme after he had a photo op with Stephen Harper, if we’re being honest. It wasn’t asking questions, it was declaratory statements: “People are saying you were intoxicated,” “You were described as being out of control,” and hammering on this notion of people judging her like the other leaders. It escalated, as Solomon kept saying “I get it” as he interrupted yet again, right up to the point where he wondered if she should step down as party leader for the speech.

No, seriously — apparently a failed attempt at comedy is a resigning offence. Never mind that in the past week, we’ve had an incidence of the Prime Minister’s Office breaching operational security in Iraq in order to make propaganda videos, but did anyone ask him to step down? Or the defence minister? We may have a romanticized notion in this country of what qualifies as a resignation-worthy offence by a cabinet minister (hint: ministerial responsibility doesn’t mean offering your resignation for everything that goes wrong), but suggesting that one bad speech should doom the rest of May’s career? It’s a bit much.

Oh, but if any other party leader had bombed their speech, the media would be all over it! Possibly, but there is also such a thing as perspective, and I’m also not sure that taking up two blocks of the “Power Panel” segment to continue to dissect May’s speech was particularly edifying either. That meant that over a quarter of P&P’s two hours was used to discuss May, driving the whole issue into the ground to the exclusion of other actual news. (That the final segment of the Power Panel was used to discuss the NFL’s “Deflategate” is another indictment of just how seriously it’s taking the need to have actual discussions about politics in this country).

The May thing will blow over in a couple of days, just like Thomas Mulcair’s conspiracy theorizing about the death of Osama Bin Laden did, or Justin Trudeau’s numerous failed attempts to make light of any number of situations have, because in the bigger picture, it’s not that big of a deal. Making a big production number of your coverage of it, however, makes one question the value we’re getting out of our political shows.