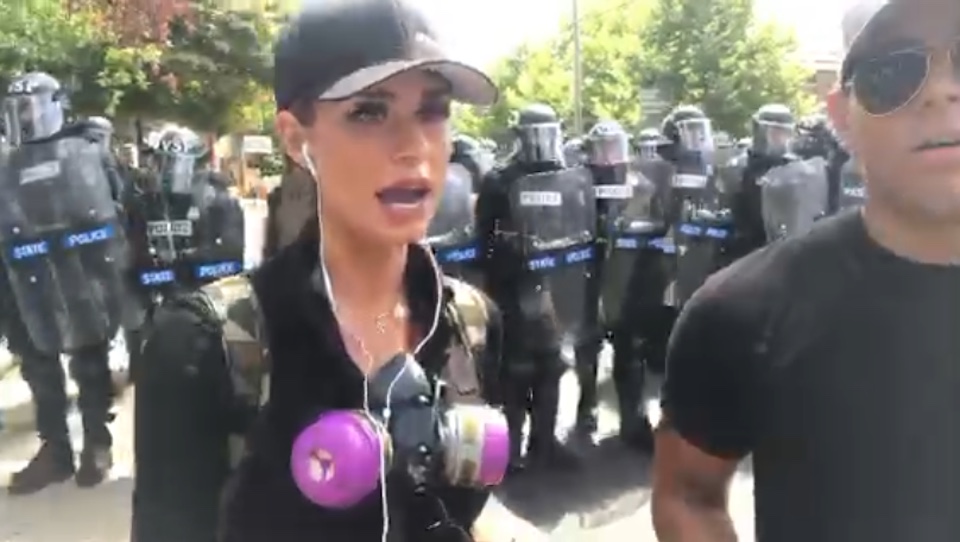 "There has been a rising in, I think, white racial consciousness," host Faith Goldy told viewers.
News Brief By Jonathan Goldsbie
Share

Just after 1:00 this afternoon, Rebel Media personality Faith Goldy captured one of the clearest videos of the car that mowed into anti-racist protesters at the apparent culmination of the “Unite the Right” convergence of white supremacists in Charlottesville, Virginia. The driver, who is in custody but has not yet been identified, killed one person and injured nearly 20 others.

In the hours and minutes leading up to that moment, however, Goldy had spent her live Periscope broadcasts rationalizing the rally organized by white nationalist Jason Kessler — an “extremist” to whom the Rebel once paid the revenues from a video that contained material plagiarized from him — and complaining about what she saw as the unfair treatment of the alt-right by authorities. In particular, she expressed the (wildly incorrect) view that American police are more generous toward Black protesters than white ones.

Goldy — a proponent of the concept of “white genocide,” who thinks that most Jews are “giant Democrat-donor losers,” and also believes there should be a new Crusade to expel Muslims from the Holy Land — was a popular presence at the event, occasionally interrupting her broadcasts to oblige selfie requests.

For those who may believe that the attitudes on display in Charlottesville were part of a uniquely American phenomenon, we have transcribed excerpts from Goldy’s four August 12th Periscope videos.

The Rebel’s Faith Goldy on…

…taking Nazis at their word:

“[Richard Spencer] said, ‘We’re not looking to cause any problems.’ But of course, the anti-fascists come out with their mace, their dog spray. It’s pretty wild.”

…how Black people are more violent:

“You know, it’s hilarious to me that so many of these people [here protesting] were part of the BLM riots, and these houses here would be smashed right now if this was a BLM protest.”

…the rise of “white racial consciousness”:

“I’m not participating, I’m just reporting a little bit. And what I’m interested in doing is kind of explaining things to the alt-lite, frankly, and to people who might be like, ‘Well, what the hell, what’s going on over here?’

“It’s a movement that’s happening right now. There’s been a rising in the alt-right. You can see that just from their sheer numbers, from one protest, one march, one demonstration to another.

“There has been a rising in, I think, white racial consciousness, after decades of identity politics which underscored non-white identities. I think a lot of white men, specifically, this seems to be their struggle — are mad as hell and they’re not gonna take it anymore.”

“So I’ve had a lot of folks on Twitter — not even from the alt-right, I think a lot of folks even from the alt-lite, at least, spend enough time online to know what’s been going on and to see the rumblings of what I take to be to be a movement, and last night, at least to my knowledge, it came out last night: AltRight.com was advertising a — what did they call it? — a Charlottesville Statement, this 20-point, kind of a mixture of, like, Martin Luther’s thesises [sic] meets the French Revolution’s Tennis Court Oath.

“It was 20 points around which they could all just rally: everything from race, the JQ [Jewish Question] — which is of course, is something the alt-right spends a lot of time talking about — economics, women and sex, globalism. And they just had a few sentences under each discussing their stance. And I think it’s kind of interesting because of the fact that there has been some, there certainly are some points of contention within the alt-right. Some people who spend more time, say, focusing on the JQ, some people who are, you know, more respect women as opposed to, like, anti-feminists to the point of being, let’s say, anti-woman to a degree.

“It was interesting to see a real consolidation of just one idea under all of these subheadings to the larger alt-right umbrella.”

…how the right can’t catch a break:

“This is what’s going on. Apparently, BLM can torch places, anti-Trump protesters… I mean, I was here for the inauguration not too long ago, I was at University of Berkeley [sic]. And, you know, it’s pretty cool when it’s the left doing this stuff, but, you know, it’s become such a tired adage, but when the right does it, all of a sudden it’s illegal, and your federal court order be damned.”

…telling racists to leave your town:

“The ex-military guys were just walking through the parking lot, a bunch of young Black men started inciting them, saying, ‘Go back home! Go back to where you came from. No one wants you here.’ The sort of language that if ever, I believe, a white man were to say that towards a Black man, you would see it played ad nauseam at any one of the major cable broadcasters. The double standards are just so gross, right? And that’s what people are seeing. And that’s why they’re getting more and more pissed off. And that’s why they’re becoming more and more frankly hard-lined in their views. Not a justification for one side or another, but I mean, you don’t have to be a rocket scientist to see that there is a double standard at play.

“And also that these kids here on the ground have been so damn brainwashed: that one Black man over there starts, in the middle of the fight, ‘You’re teaching me about his-tory! His-tory!’ I’m like, ‘Dude, are we really gonna do this right now, a gendered perspective of historiography? Really, in the middle of the parking lot, while y’all throwing all sorts of things at each other?’ The brainwashing is severe right now.”

[appearing to indicate one of the open-carrying alt-rightists leaving town] “Look at this guy: trying to civilize them. They’re here for your freedom.”

“Chant ‘BLM!’ and all of a sudden the cops don’t care. Where’s the riot police now?”

Having largely driven out the white supremacists, the anti-racist protesters march and declare, “Our streets! Our streets!”

“Black Lives Matter is allowed to march; alt-right is not.

Women begin to yell at Goldy to leave: “If you’re in the alt-right, get away from here!”

She smirks at the camera. Moments later, the car plows into protesters.

Correction (8/12/2017, 8:00 p.m.): This post originally misstated the number of people killed by the car in Charlottesville, incorrectly including the two who died in a nearby helicopter crash.