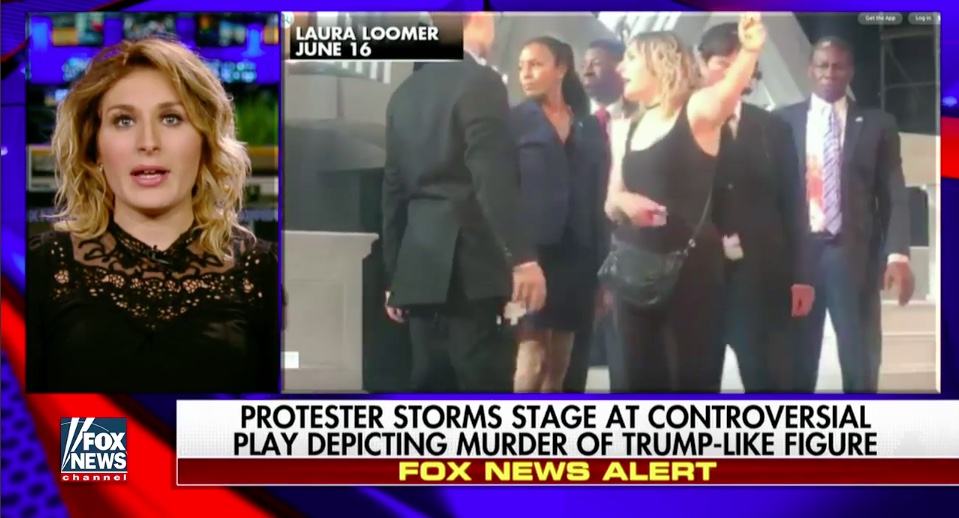 Laura Loomer, best known for her Shakespeare in the Park disruption, says she was asked to stop following around Hillary Clinton.
Article By Graeme Gordon
Share

After Rebel Media’s near-meltdown in mid-August involving a string of high-profile exits, Ezra Levant’s far-right Canadian outlet was left with just a pair of big-name contributors to bring in viewers and notoriety: American Laura Loomer and Brit Tommy Robinson.

Now Loomer, best known for storming the stage of Julius Caesar in Central Park, has also quit The Rebel, telling CANADALAND that they parted ways last Wednesday, even though neither party made any public announcement until she tweeted about it on Sunday:

I have parted ways with @TheRebelTV and look forward to what the future holds.

“It’s Ezra’s company at the end of the day,” she says over the phone from Westchester, New York. “And I’m grateful he gave me the opportunity that he gave me to work for The Rebel for the three months that I did work for them.”

“I left because there were disagreements over how I could use my social media, and I just couldn’t approve of that. I wasn’t willing to, like, not tweet about anything besides Rebel stories because essentially then I wouldn’t be able to use my voice.”

But near the end of a two-hour interview, she becomes more candid: “I didn’t want to stay in a situation that was aggravating me and pissing me off, so I resigned. I’m not going to play the victim. I didn’t agree with what they were telling me to do, and I don’t agree with the policy.”

Levant did not respond to a request for comment.

Loomer, The Rebel’s sole U.S. correspondent since Jack Posobiec was fired in May, also cited a recent lack of communication from the head office in Toronto as the outlet goes through structural changes. She also said she had difficulty getting editorial approval for her stories.

“They didn’t want me making Periscope [videos]. It started to become an issue because they didn’t seem to like my Hillary Clinton stuff.”

For the past few weeks, Loomer has been attending Clinton’s What Happened book tour at stops in different U.S. states to confront her about allegations of criminality. A June Rebel video of her similarly confronting Chelsea Clinton has garnered nearly half a million views.

Loomer had been a staunch Trump supporter, but her support has lately waned over his lack of action on election promises such as the wall and locking up Clinton.

Clinton laughed off the first question but eventually told Loomer that she was sad she believed things that weren’t true.

After over 300,000 people watched Loomer’s video of the encounter, she made the American conservative-media rounds, appearing on Infowars and Fox Business, the latter introducing her as “Laura Loomer of Rebel Media.”

Then on September 16, Loomer showed up at a Costco in Brookfield, Connecticut, to try and confront Clinton at another signing. This time, police were waiting for her outside. They eventually let her enter the store but informed her that tickets to see Clinton were sold out. And last Saturday, Loomer showed up outside a library in Chappaqua, New York, with a bullhorn, chastising parents for bringing their children to see the “enabler of a sexual predator.”

Loomer defends her tactics as effective. “No one [gave] a shit about voter fraud in New York City until I put a burqa on and was offered by an election official [Clinton aide] Huma Abedin’s ballot on election day.”

She says Rebel management told her to drop the Clinton antics.

“I don’t know, it was really weird,” she says. “‘Oh, we don’t want you going to the Costco event. We don’t want you covering her. The story is over, and we’re not going to touch it anymore. And stop tweeting about Hillary Clinton.’”

Loomer, who says she attributes about 33 “suspicious deaths” to the Clintons, still hopes to attend the book signing in Toronto this Thursday if she can raise funds from donors contributing to her newly launched crowdfunding accounts on Patreon and conservative-based Freestartr. (There is no evidence that the Clintons are in fact serial killers.)

“I’m trying to weaponize citizenship journalism. I’m trying to make it a weapon that people can use to hold people accountable,” she says.

"I get blamed for things I have nothing to do with." @RogerJStoneJr

Back in June, shortly after Loomer joined The Rebel and had already created a popular video of herself covering New York City’s Fearless Girl statue with a burqa, she was arrested for storming the stage of The Public Theater’s Shakespeare in the Park production of Julius Caesar, in which the title character was portrayed as Trump. She said she disrupted the assassination scene to raise awareness of the “normalization of left-wing violence against the right.”

The Rebel fundraised for her legal costs, but public records indicated that Levant had registered the FreeLaura.com domain name roughly six hours prior to the start of the Caesar performance.

Asked about this, Loomer says, “He set it up early, from what I believe, because The Rebel doesn’t have people working 24/7, they have this kind of 9-to-5 setup.” She claims, however, that she didn’t initially intend to get arrested and that this was merely a precaution.

She also says that the tens of thousands of dollars raised — far more than the potential fines she faced for charges of criminal trespass and disorderly conduct — went to pay lawyers to keep her out of jail and that she was ultimately sentenced to six months’ probation and a day of community service.

Before joining The Rebel, 24-year-old Loomer worked for conservative muckraker and investigative activist James O’Keefe’s Project Veritas, an organization that specializes in embedding its employees, equipped with hidden cameras, into government and Democrat-affiliated organizations in efforts to expose corruption and illegal activity.

“We were pretty much the reason Hillary Clinton lost the election,” she asserts, referring to surreptitiously recorded conversations with Democratic operatives that Veritas claimed showed evidence of paid anti-Trump protesters and possible voter-fraud schemes. Her stated purpose for continuing to pursue Clinton relates to the former candidate’s Onward Together PAC, which funds liberal groups that Loomer believes will incite violence against Trump supporters in a similar manner. (Although the highly-edited Veritas videos appeared to show significant Democrats discussing questionable tactics, and a pair of people lost their jobs, there is no clear evidence that any violent protesters were in fact funded by Democratic organizations.)

In August, neo-Nazis blamed Loomer for infiltrating and reporting on one of their chat rooms connected with white-supremacist website The Daily Stormer, where they were discussing plotting violent attacks. The chat room was shut down shortly thereafter (though Loomer maintains she supports their right to free speech and didn’t ask the provider to shut it down).

Although Loomer has no jobs lined up since resigning from The Rebel, she says she will have no trouble finding another gig, as her videos “always” go viral. She says that in her last appearance on Infowars, conspiracy theorist Alex Jones mentioned that they needed to get her to start doing work for them.

Having dinner at a Korean restaurant by myself and the couple next to me is holding hands taking about @RealAlexJones.

This is so romantic.

For now, she plans to continue her “surveillance” of the Clintons, and to remain “very vigilant” while doing so.

“You never know, you could be poisoned. Like, there are ways that people can kill you, and no one will ever know that you were murdered. Especially if you have the money and the resources to hire trained assassins, there are ways people can be murdered without anyone knowing.”