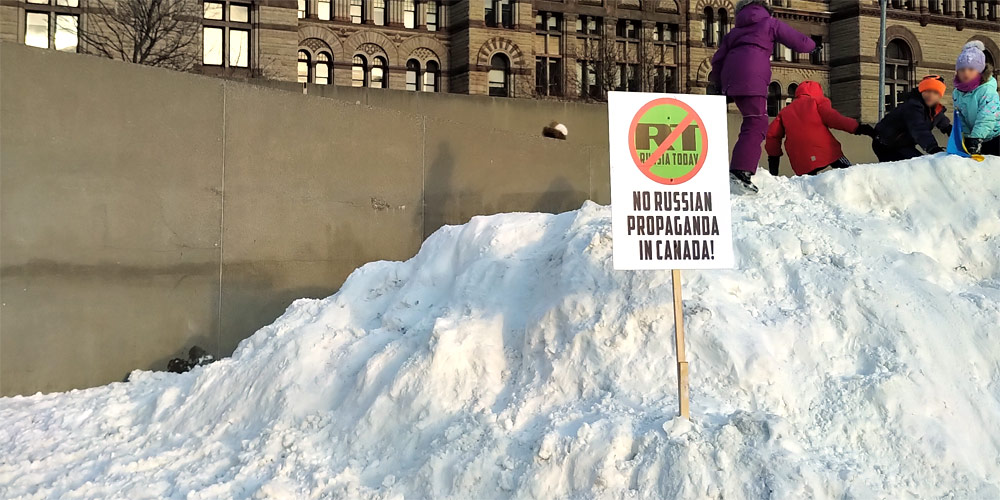 Approximately a decade ago, it became evident to Ukrainians that disinformation threatened the very existence of their country.

Ukraine had become a testing ground of sorts for modern information warfare, revealing the sophistication of the Russian information-chaos machine — which, after demonstrating its extraordinary effectiveness in Ukraine, would go on to influence the 2016 American election, change the course of geopolitics, and, on a more basic level, sow hatred and discord between family and friends, even here in Canada.

Beyond fake news and Twitter trolls, the information war in Ukraine set out to create an alternate reality in which facts would become debatable and the Kremlin could play public opinion like a fiddle.

And it worked for a while. Until Ukrainians got wise to it.

On this week’s CANADALAND, senior producer Sarah Lawrynuik looks at how Ukrainians overcame Russia’s decade-long disinformation campaign and what other countries, including Canada, might learn from their success:

Among those Sarah spoke to for the show was McGill political science professor Aaron Erlich, who last year published a paper examining the ongoing efficacy of the Kremlin’s disinformation campaigns in Ukraine and has another forthcoming that considers possible cognitive strategies to counter them.

This is an edited and condensed version of their conversation

How did Russia become so good at disinformation? Why is it that they are known for these campaigns?

It was developed in the Soviet Union as part of their strategy to fight the Cold War. Given Putin’s background, it is perhaps not surprising that many of the current strategies have very, very strong echoes of what was done during Soviet times. A lot of it was to try to pump out positive stories, like many countries do. But the Soviet ones at the time tended to be less true than other countries’ stories. There was also a Soviet tradition of wanting to pit NATO countries against one another, pit Western democracies against one another, because they wanted their enemies to be weaker.

One thing that is different from the Soviet strategies is that there has been much more of a focus on casting people as Nazis or as right-wing stooges or stools. There’s also a different strategy that sometimes comes up, which is this kind of distort, dismay, and distract — where you just inundate people with so much information and so much crud that they just turn off. You see this all the time in Russia. It’s very obvious when people say, “I don’t want to talk about politics.” If you get people to turn off and you get people to lose engagement, that’s also in some ways a success.

You said it’s questionable whether Russia is actually good at this. When I was reporting in Ukraine in 2019, the people I spoke with were very concerned about disinformation campaigns and felt like their country was being slowly eaten away because of them. I even spoke with one Crimean refugee who said that while the invasion of Crimea was happening in 2014, she was arguing with people in Crimea about whether or not it was indeed a Russian invasion. How have things changed from 2014 to now?

As somebody who’s travelled back and forth there over those years, it’s really quite incredible how quickly Ukrainian society, particularly in the cities, has changed in that time period. It became a much freer environment, including from a media perspective, after the Revolution of Dignity.

A lot of Russian media was actually banned from the country. There’s a political science paper by Leonid Peisakhin and Arturas Rozenas that basically showed that those who are within distance of Russian satellite and television towers actually have much more pro-Russian views than those who are not. So the removal of a lot of the Russian media, like television, probably had quite a large effect.

There was a lot of investment from the EU and from Western donors into work to really highlight that type of disinformation. StopFake and other organizations were spun up to support getting to the bottom of fake stories.

I think the invasion of Donetsk and Luhansk by the Russians was really a watershed moment for many Ukrainians, who just radically changed their views about Russia. The incomplete nature of Putin’s attempts to invade Ukraine really galvanized a large percentage of the population to pay much more attention to what the Kremlin and Russia were doing and to be much more vigilant about the kind of information they were consuming.

In the studies we ran, we tested various types of disinformation on people. We actually found that, even compared to folks in the U.S., for example, Ukrainians are pretty good at ferreting out disinformation. And I think that was an early sign that the idea that Ukrainians were going to run with the white flag and welcome the Russians — because it was going to be like the Anschluss of Austria or something — was not what was going to happen. Putin critically underestimated a massive, massive shift in public opinion.

What’s the significance of the RT television network?

They specifically take orders from the Kremlin, and they’ve hired journalists from around the world who are willing to be paid to say more or less what they are told to say about the topics that Russia cares about. On things that Russia doesn’t care about, the journalists have a fair amount of freedom.

It’s hard to measure exactly what their influence has been, but they’ve certainly had a non-negligible influence on the media landscape, because they have no bottom line. They’re funded as a Kremlin project, so there’s a real willingness to entertain and restate views of the world that are supportive of what the Kremlin wants.

They care about anything that would divide populations that may be supportive of anti-Kremlin action. Or if there’s a side that may be more supportive of Russia, they are always going to divide the part of the population that isn’t. They want to sow discord in those countries. They want those countries to be as unstable as possible. And so anything that looks like it might be stability-promoting is an area that they want to intervene in.

They posted an immense number of stories about Hillary Clinton fainting, about Hillary Clinton’s emails, etc. Those were all in the same line as the Freedom Convoy. Those are stories that help support forces that they think are more supportive of the Kremlin. And you see that, frankly, among certain elements of the right wing.

It’s worth mentioning that Putin is very, very firmly in a Cold War mindset in some ways, and so is focused on the large NATO players — the U.K., the U.S., and to an extent, Germany and France. I think the Kremlin interest in other countries, while there, is a little bit less front and centre.

What can Canadians take away from the Ukrainians who are learning how to deal with disinformation so well?

What’s really important is to link our wellbeing to not believing these things. That’s the very, very hard lesson that Ukraine learned, and hopefully we can learn without having such hard lessons: that our wellbeing as citizens of a democracy hinges on being able to live in a society that’s based on facts that have scientific truth to them. And if we can’t do that, then we are headed down a very seriously dangerous road.

Ukrainian President Volodymyr Zelensky spoke a lot in Russian during his campaign, and he was very much trying to unite and make Ukrainian identity a civil one that was inclusive of people who spoke Russian. And I think there is something to reflect on about that in the Canadian context, in a bilingual society. Something can be learned there about how to nation-build in an inclusive way.

What we are now studying is how to best approach people about disinformation and whether they respond differently in the language that they prefer not to operate in. I mean, living in Montreal, there are large Anglophone and Francophone populations, and people consume media in both languages fairly regularly. How disposed they are to believe things may depend on the language in which they consume it. And so we were interested in understanding that a bit more, and were working on a project in the Ukrainian context when this invasion happened.

If you’d like to hear more about Cold War disinformation campaigns, and in particular the Soviet genesis of one AIDS-related conspiracy theory, CANADALAND’s paid subscribers will have access to an extended interview with historian Douglas Selvage later this week. Head to Supercast to sign up.

Photo of the anti-RT placard in a snow bank taken by Jonathan Goldsbie at the tail end of the Ukrainian solidarity rally in Toronto’s Nathan Phillips Square on February 27.